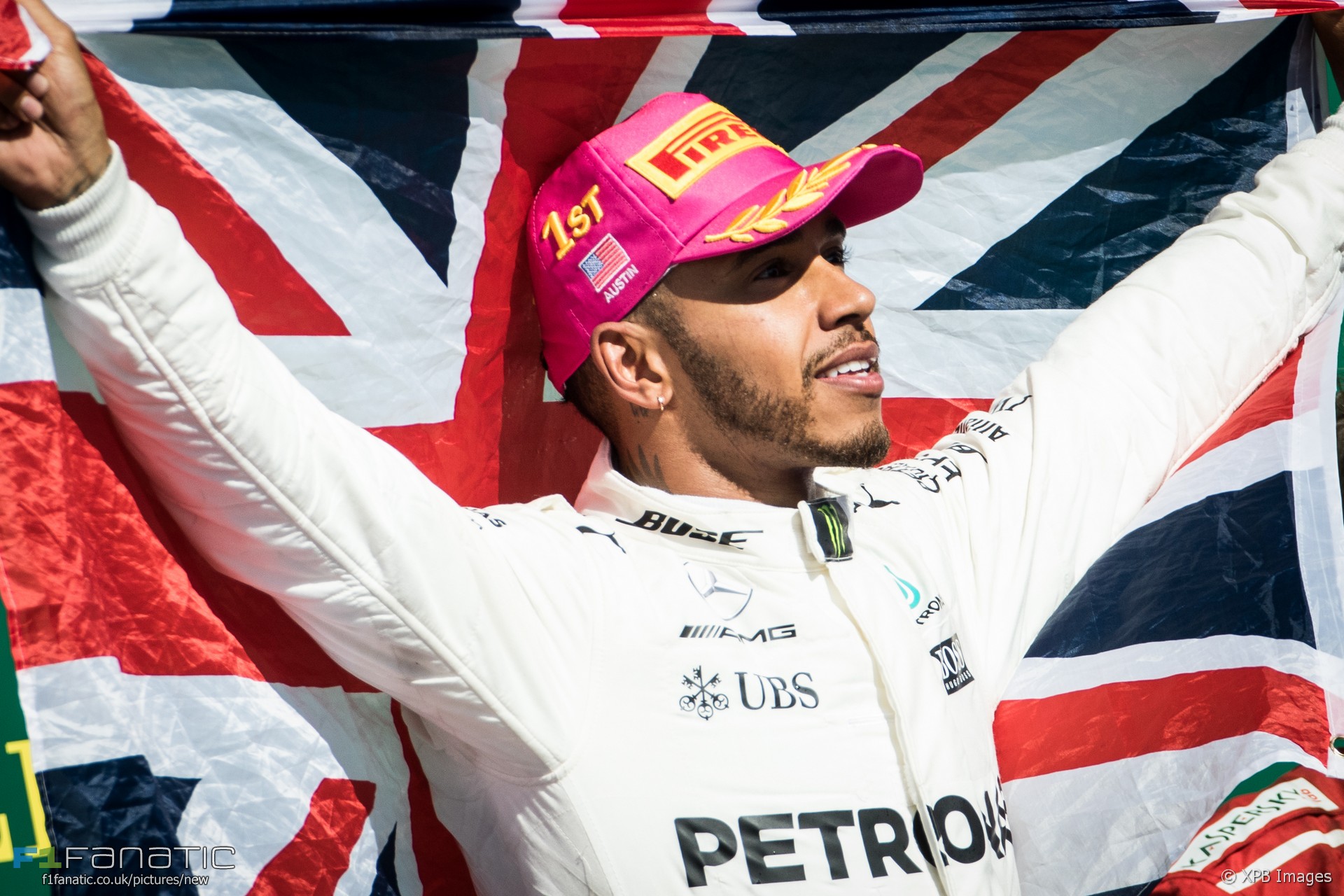 Lewis Hamilton only needs a fifth place from any of the remaining three races to win this year’s world championship.

The chances of him being beaten are now extremely remote. But he knows nothing can be taken for granted.

After all, ten years ago he only needed a fifth place from any of the last two races to win the championship. He didn’t get one, and Kimi Raikkonen snatched one of the most improbable title wins the sport has ever seen. In relative terms it was the biggest championship lead ever overturned in F1 history.

Hamilton tallied his 72nd pole and 62nd win. But Sebastian Vettel took the fastest lap – the 32nd of his career. Vettel’s lap of 1’37.766 is a new race lap record for the Circuit of the Americas, and the all-time track record fell in qualifying.

Neither Vettel nor anyone else have been able to contain Hamilton since the summer break. Six races have yielded five wins and a second place for the Mercedes driver, who’s only dropped seven points from a potential maximum of 150. Vettel has lost points to him every weekend since Hungary.

Hamilton’s record in the United States Grand Prix is much the same. Seven races, six wins, five at the Circuit of the Americas and the other at Indianapolis back in that unforgettable 2007 season. Fittingly for a driver who has made the USA his second home, he is now the most successful driver in America, with six United States Grand Prix wins. That moves him ahead of Michael Schumacher (five US GP wins) and Ayrton Senna (two US GP wins and three US Detroit GP wins).

Another of Schumacher’s records fell last weekend. Having already surpassed his pole positions benchmark earlier this year, Hamilton’s 117th front row start puts him ahead of Schumacher at the top of the all-time record list.

Esteban Ocon was another record-breaker on Sunday. Since he began his F1 career last year he’s been classified in all 26 races he’s started. That beats the previous best finishing streak from the start of a season set by Max Chilton. Both drivers began their careers at Manor.

Carlos Sainz Jnr made a dream debut at Renault, starting and finishing in seventh place. That result is just one place lower than their best finish of the season so far.

His move from Toro Rosso could end up costing his former team a place in the constructors’ championship. Sainz’s six points moved Renault ahead of Haas and leaves them five shy of Toro Rosso. Renault’s target team is Williams, who are a further 15 points ahead. It’s not impossible they might be caught, though Renault need fewer problems of the type which ruined Nico Hulkenberg’s weekend.

Daniel Ricciardo posted his third retirement due to a technical failure this year. He’s only had one fewer than team mate Max Verstappen, whose reliability problems have been a significant talking point.

Verstappen repeated his Chinese Grand Prix feat of starting 16th and finishing third, but only ‘on the road’. A post-race time penalty for overtaking Raikkonen with all four wheels off the track dropped him down to fourth.

Perhaps the stewards wanted to prevent the 20-year-old, who is below the legal minimum drinking age in Texas, from quaffing the podium champagne?