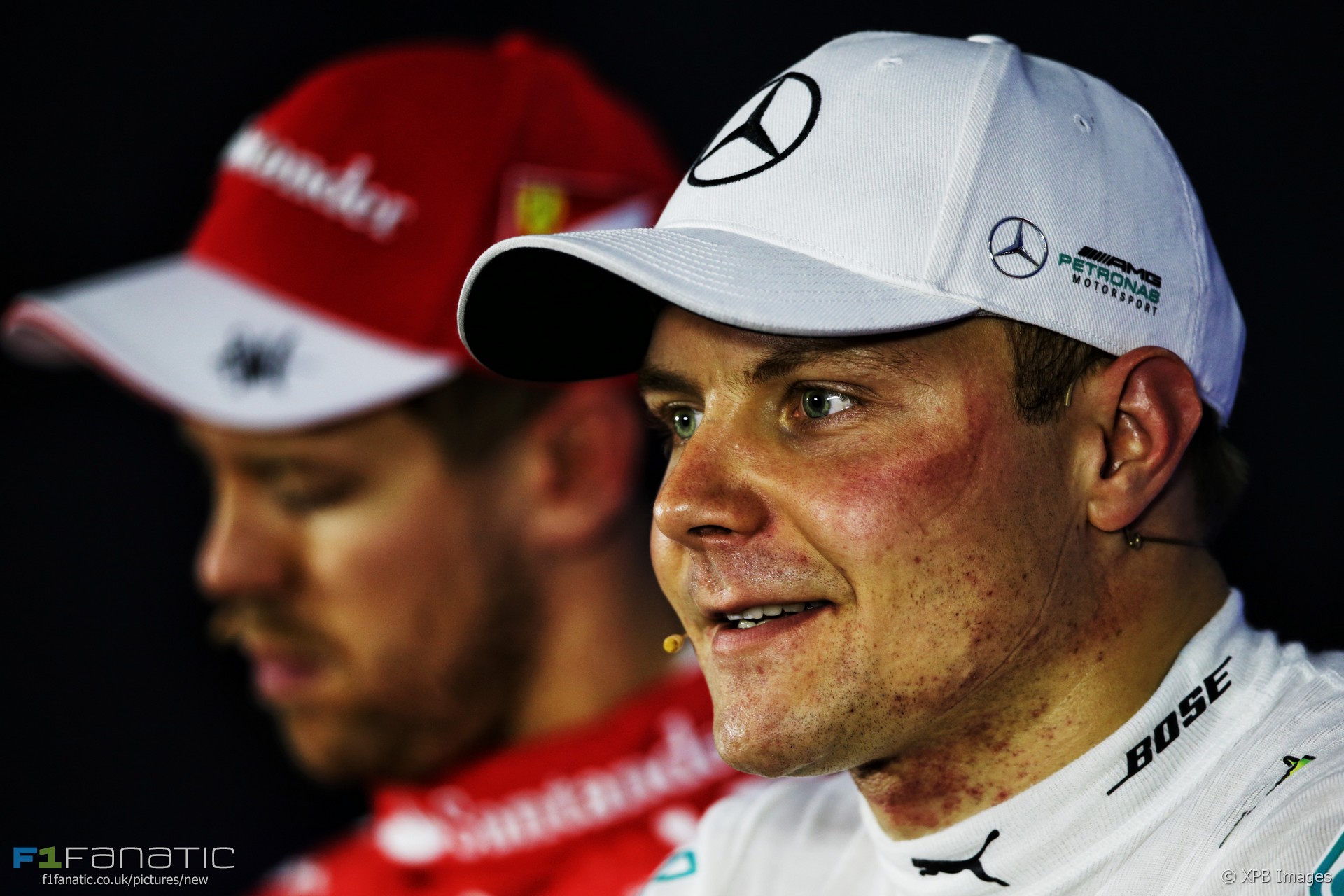 Following the stunning developments of qualifying the Brazilian Grand Prix will begin with one Mercedes at the front of the field and the other at the back, in the pit lane.

Pole sitter Valtteri Bottas has a great chance to score his first victory for four months and put some polish on what has been a different second half to his first season at Mercedes.

How successful he may be in doing that will first of all rest on him getting a good start. But even if he manages that he can still count on sustained pressure from Ferrari.

Sunday at Interlagos is expected to be substantially hotter than Saturday was. “The conditions we see today have nothing to do with the conditions we will have tomorrow<" said Carlos Sainz Jnr after qualifying.

Mercedes’ vulnerability in hotter temperatures is well-known, and it’s partly what Ferrari will be counting on. Like Bottas, they have also been without a win since the summer break.

While Bottas tried to make his escape, Hamilton will probably be relishing the prospect of getting stuck in from the back of the field with a fresh engine and four untouched sets of super-soft tyres. The latter may prove especially useful if there’s a late Safety Car appearance.

Although Red Bull had a disappointing Saturday, they ran better in the warm conditions on Friday and could be back in the hunt on race day. At the end of qualifying Max Verstappen commented on the difficulty he’s had getting the front end to turn in as he wants. But the RB13s are habitually quicker over a race stint, as we’ve seen in recent events.

Daniel Ricciardo has a bigger job on his hands as another power unit penalty has dropped him back into the pack. If he can make quick progress through traffic he may be able to run long on his soft tyres, which is his preferred of the two softer compounds.

As usual the hardest available tyre is unlikely to figure in the strategies. Expect most drivers to opt for one-stop strategies, those starting on super-softs to keep them on until at least lap 26.

The recovering Ricciardo and Hamilton will inevitably reach the top midfielders at some point, so the key to their race will be losing as little time as possible at the start. Watch for Fernando Alonso getting his elbows out again Sergio Perez at the start. The latter may well be preoccupied with ensuring he keeps his team mate behind, especially as Esteban Ocon has the benefit of a free choice of tyre for the start of the race.

Will Bottas or one of the Ferraris be first home? And what can Ricciardo and Hamilton salvage from their compromised starting positions?