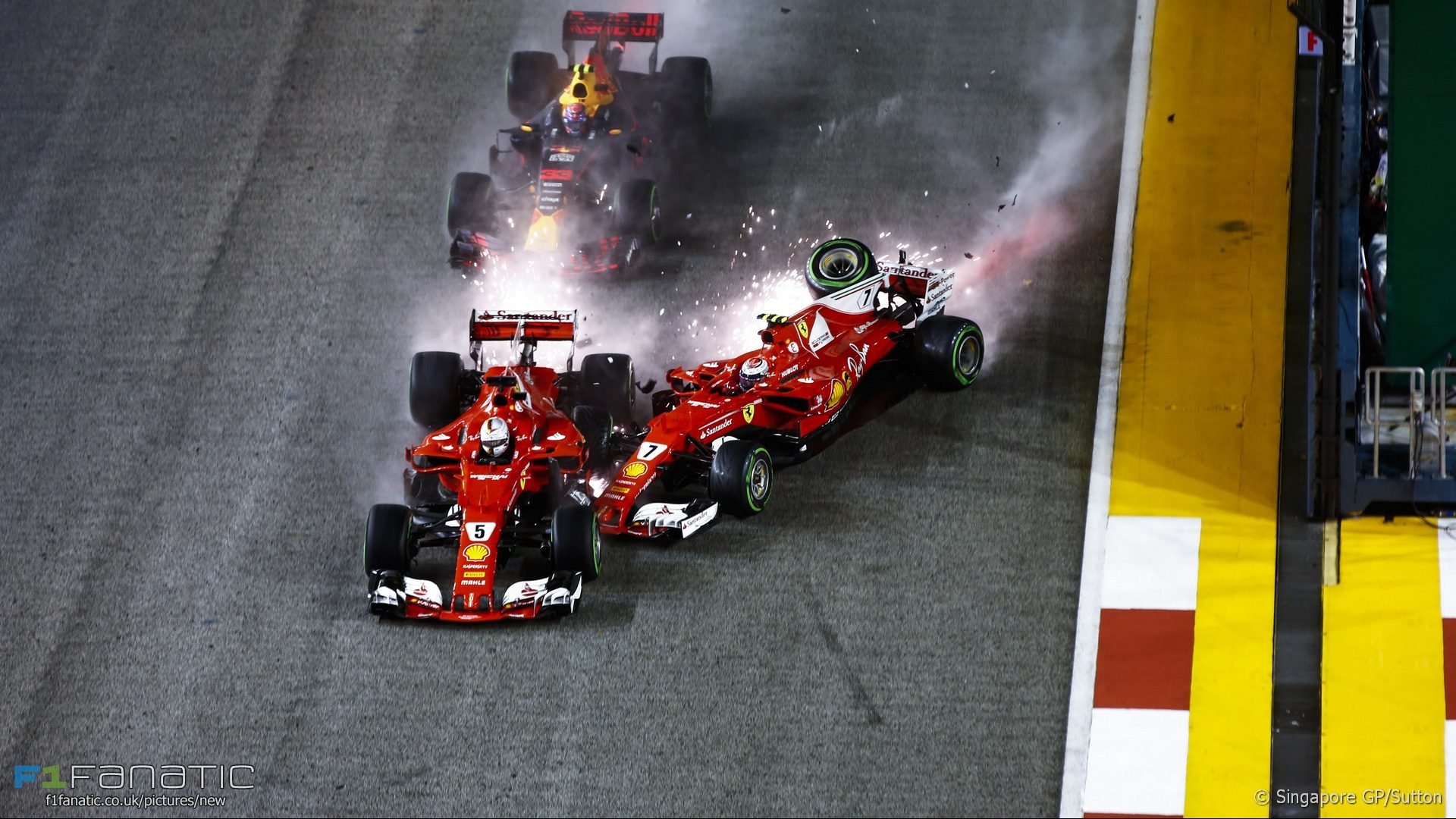 On Sunday Sebastian Vettel won and Lewis Hamilton didn’t make it onto the podium. It was exactly the kind of result the Ferrari driver needed a couple of races ago when his title hopes were still alive.

The 2017 season will be remembered as the year of Ferrari’s great Asian collapse. Although Hamilton had already wrested the points lead from Vettel before the teams headed east, the following three races in Singapore, Malaysia and Japan crushed Vettel’s title hopes.

And it was in the first of those that the most damage was done, arguably by Vettel’s own hand.

Mercedes were weak in Singapore, Ferrari were strong, and Vettel lined up on pole position with his team mate and the Red Bulls between him and Hamilton. Vettel arrived in Singapore three points behind Hamilton and this should have been the moment he took that back and much more on top.

But by taking an uncompromising line on a wet track with Max Verstappen and Kimi Raikkonen alongside him, Vettel skittled all three into retirement and handed Hamilton a race he shouldn’t have been able to win.

Guessing what might have happened had drivers not retired from races is always a subjective business. But even a conservative analysis of Vettel’s setback in Asia shows Singapore was the most damaging race for his title hopes.

Even if we assume Vettel had finished third in Singapore after letting Raikkonen and Verstappen go, and Hamilton took fourth immediately behind him, Vettel still would have been much better off. By using the Points Calculator we can see that instead of losing 25 points to his rival Vettel would have gained three – a total swing of 28. And had Ferrari moved Raikkonen aside it could have been greater still.

The two separate power unit problems at the next races didn’t cost him as much. The failure during qualifying in Malaysia probably cost him pole position which he likely would have turned into a win. As it was he finished fourth to Hamilton’s second, losing six points to his rival. But even if he’d started at the front with Hamilton third, that would only have been a 16-point swing, less than in Singapore.

In Japan too although Vettel retired early on he had qualified second behind Hamilton. Making the reasonable assumption that Hamilton would still have converted that victory and Vettel finished second, this was an 18-point swing against Vettel. Again, Singapore was clearly more damaging.

Vettel was initially dismissive of the Singapore crash, saying “it doesn’t change much” after climbing from his car. But the passage of time appears to have changed his view.

After Hamilton clinched the title Ferrari CEO Sergio Marchionne said their defeat had been down to “technical issues and driver error or driver misjudgement”. Vettel said his comments were “fair enough”, adding, “I think there are always things that you could do a bit different.”

The stewards rightly deemed the crash a racing incident. But it was Verstappen who, immediately afterwards, best spelled out the miscalculation Vettel had made. “When you’re fighting for the championship and then try to be that aggressive at the start when Lewis is behind you, quite comfortably, it’s not I think the smartest move to do.”

Following his Brazil victory, Vettel is 43 points behind Hamilton. That 28-point Singapore swing is the reason why the championship isn’t going down to the final race in Abu Dhabi next week. Without it, Vettel would be 15 points down on Hamilton heading into the finale.

And we could be enjoying a much more exciting championship. The clash between the pair in Mexico would have been a moment of high drama which ultimately helped Vettel chip into Hamilton’s lead. And the story of Brazil would have been how Hamilton, with the title in sight, crashed his car in qualifying and allowed Vettel to grab a victory which set up a final-round title-decider.

Singapore ‘didn’t change much’? On the contrary, it changed an awful lot.