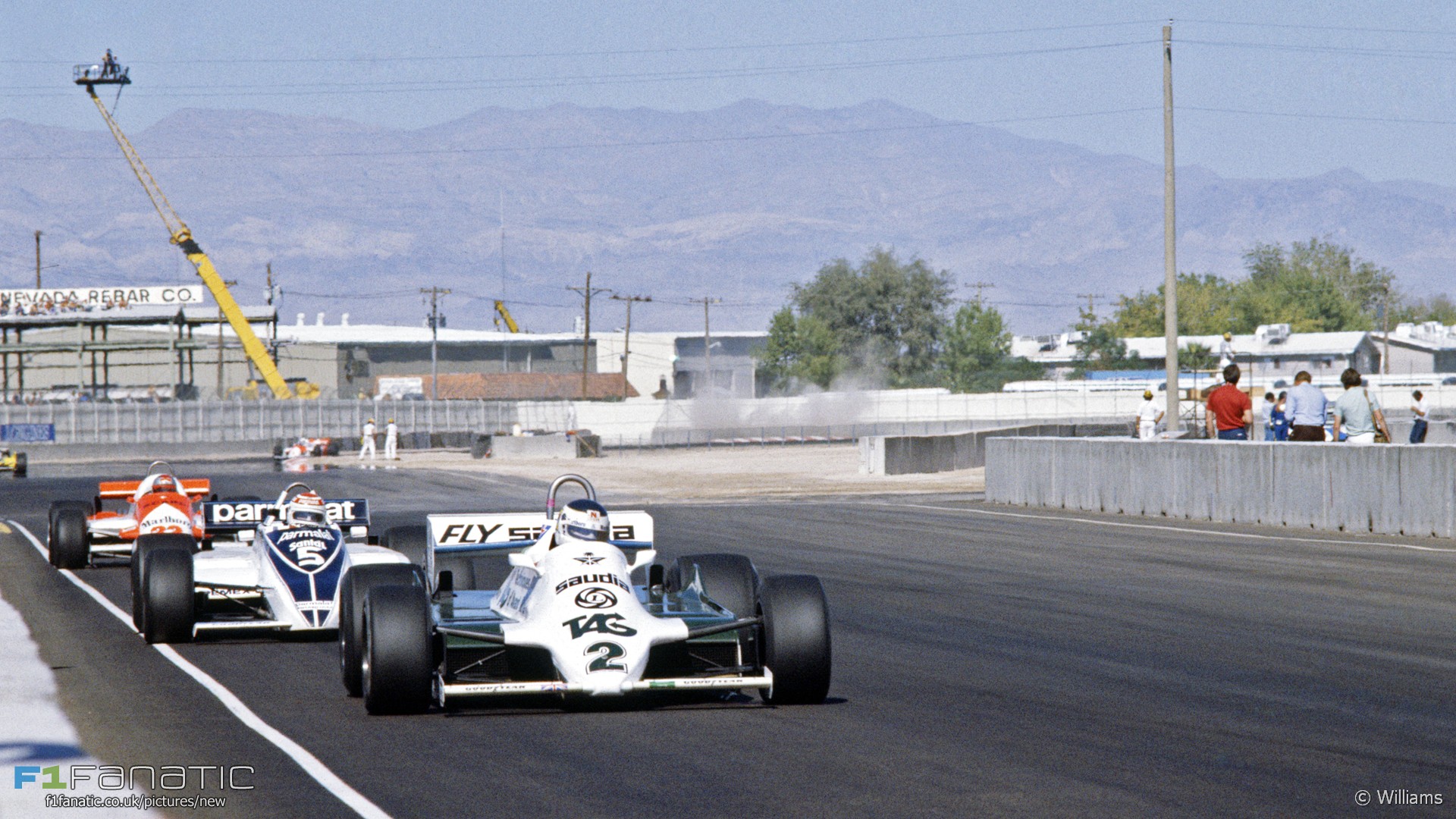 In the round-up: Formula One has trademarked titles for races in Las Vegas, New York and Miami. F1 previously raced in Las Vegas in 1981 (picturesd) and 1982.

"We have made no secret that we are looking for destination cities, and regarding the U.S., Las Vegas has been mentioned alongside Miami and New York. They are part of a number of cities worldwide who have expressed their interest in hosting a Grand Prix."

"We have been able to attract great brands because of what we do off track as well as on track and I think F1 is not in anywhere near as rude health as it was 20 years ago when teams were making profits. There were some great brands on the cars."

"I was like 'from now on, I need to be ahead every single time' and then there'll never, ever be the question or whether Valtteri should let Lewis past and those kind of things."

"Maybe they are not the quickest, but they are fighting for podiums and victories. That will be a very good step if we can achieve that."

"There was blood everywhere - everywhere I saw blood. I thought my mother would die. She could not breathe and was scared to death, like me."

Ex-billionaire Vijay Mallya lives on $9,000 a week after court order (The Straits Times)

"A request by Mallya to increase his weekly allowance while his assets are frozen from £5,000 to £20,000 was adjourned by his lawyers."

"(The Daytona 24 Hours is) probably the biggest race I’ve ever done. So if we did win, it’d definitely be one of the highlights of my career. It’s a weird race because you never win within the first 22 hours, the race is only won in the last two hours, because you can unlap yourself under the Safety Car, which is quite a rubbish rule."

Sad news about Bette Hill, remarkable wife & mother to World Champions. Always a pleasure to chat with when @HillF1 was on his trajectory through F3 & F3000 towards #F1 pic.twitter.com/Yg4njQViW7

They don't make ladies like Bette Hill these days. So sorry to hear of her death. Have some great memories of her. One of the few ladies Frank Williams was frightened of. Thoughts to @HillF1 and the family

Sad to hear that Bette Hill has died. The final chapter of Graham’s autobiography, which she wrote, is among most moving I’ve ever read. She seemed to have plenty of class in a very chauvinistic age. RIP.

Dear @fia,
If the news I am hearing is correct, and you have appointed a racer with no notable results, who does not believe we compete as equals in this sport, to represent women in racing, I am incredibly disappointed.
Sincerely -an #Indy500 qualifier, #IndyLights race winner.

New restriction on #F2 driver tests next year. "No driver entered in the championship may carry out any type of private testing on any track with any type of single seater car that was designed and built to achieve a power-to-weight ratio less than 2.0kg/bhp" (F1 cars excluded).

Vettel's view on Formula E hasn't changed, then. He said it was "not the future" before its first race and four years on he's still saying the same thing. #F1 https://t.co/jE9riOSKtw

After winning another term yesterday, does Jean Todt get too little credit for his work outside F1?

The president of the FIA does more than just deal with F1 and Jean Todt has done a lot outside of F1.

Jean Todt was a big part of the formation of the World Endruance Championhip in 2012, the first time there had been a world sports car championship for 20 years. He was a part in Formula E getting started up and has done things to help the World Rally Championship get out of the irrelevance it was in a few years back when it didn’t even have a full-time promoter in 2012.

And the FIA under his leadership has also played major roles in road safety which have seen continued gains in that area. And of course there is the continued safety improvements brought into F1 and other motorsport during his time.

Among other things that don’t get the attention of a lot of that.
RogerAyles