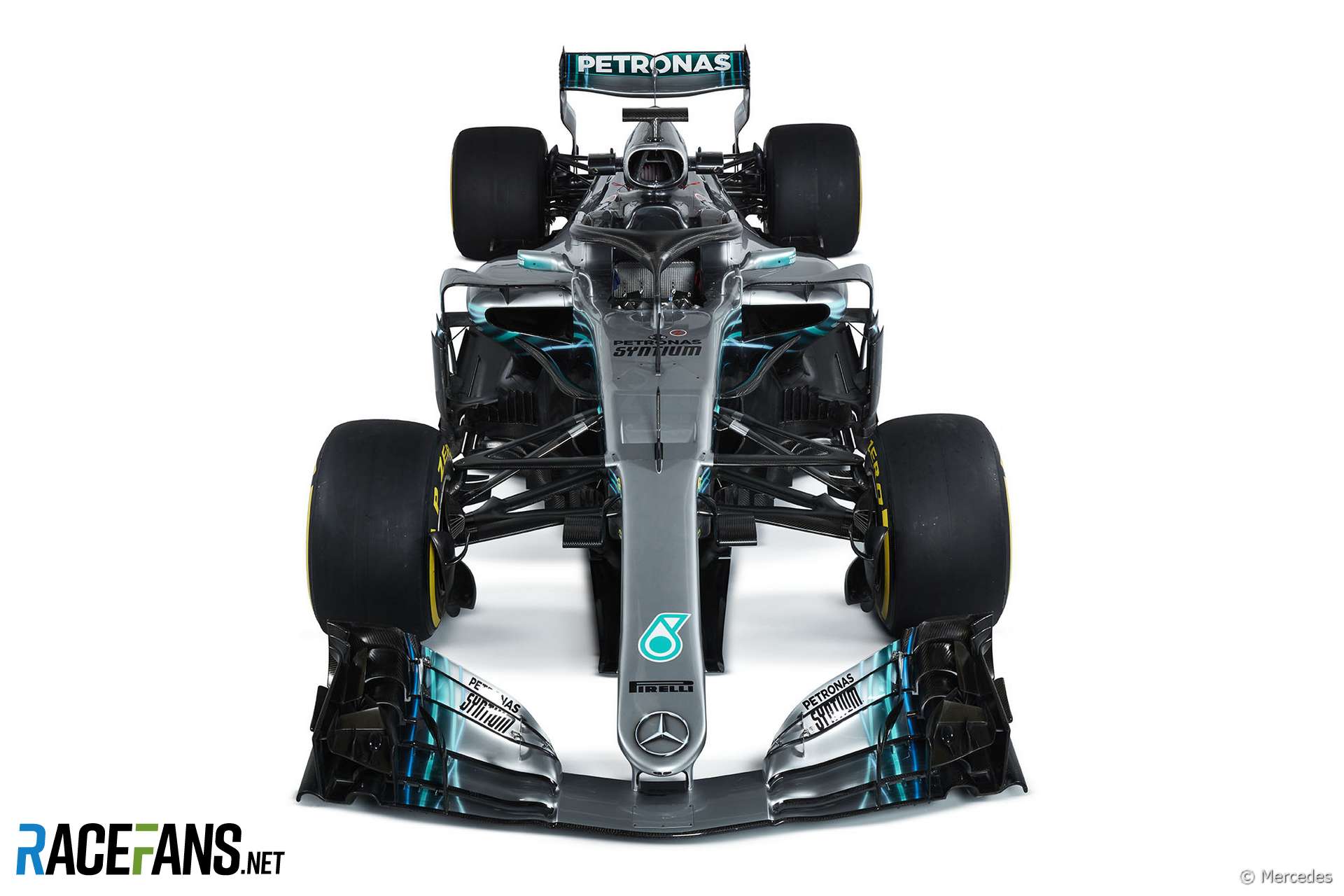 The phrase ‘if it ain’t broke don’t fix it’ is heard a lot at this time of year. But if it’s true for anyone it must be the world champions.

Although Mercedes did not dominate 2017 the way they did 2014-16, they still won 11 races and wrapped up both championships with weeks to spare. And so the Mercedes-AMG Petronas Motorsport F1 W09 EQ Power+ – which for obvious reasons we will simply refer to as the Mercedes W09 – is clearly an evolution of the W08.

Up front Mercedes have refined their caped nose concept which was introduced in Spain last year, replacing the hanging turning vanes that everyone else utilises. The cape adds significant weight to the structure so the nose is tapered towards the front bulkhead to reduce material volume.

The transition between the nose and bulkhead has been softened by extruding the suspension clevises in the same fashion as Red Bull.

The team has retained its the high upper wishbone suspension, a configuration which has been widely copied by others this year. They have applied this thinking to the rear, too: the upper wishbone has a notably higher pickup point at the upright than before. This is also part of a trend seen elsewhere in the field.

The engine fire-up video Mercedes release indicated the central exhaust exit had been bridged to clear something. We can now see this is the higher inboard mounting for the upper wishbone. On first impression the reason for doing this seems again to be aerodynamics. But this may not be the case.

It is well known that it was sometimes difficult to get the best out of the W08, particularly at street circuits and venues with low surface roughness. According to James Allison the wheelbase on the W09 is exactly the same as its predecessor, as across the season it was advantageous (from an aerodynamic perspective at least).

It is therefore reasonable to assume this change to the rear suspension is designed to address the problem. The lower wishbone appears to be similar in geometry and stature to that on last year’s car, so the re-positioning of the upper wishbone in the manner they have done would raise the rear roll centre. This will create less roll at the rear, generating more energy through the tyres which will perhaps allow them to stay within their operating window better than before.

The bargeboards on the W09 are a much tidier version of what had become a patchwork of carbon fibre towards the end of 2017. Indeed it is this area of the car that is most intricate and beautifully finished, introducing a few ideas from other cars (notably the fluted footplate) while retaining their core design, including the horns that attach to the tub.

The sidepod inlets are narrower and form the basis of the trailing bodywork, which hugs the car tightly and more elegantly than last year’s hunched design to help guide airflow over the floor below, through various aero devices and onto the top of the diffuser at the back.

At the back of the car are a few subtle changes. The single rear wing support no longer breaches the exhaust pipe, the team going back to an inverted Y-shaped pillar that wraps around the exhaust and attaches to the rear crash structure. Over the winter the FIA have clamped down on monkey seat winglets, and so just a minimalist single element design is perched on the support to influence the exhaust plume.