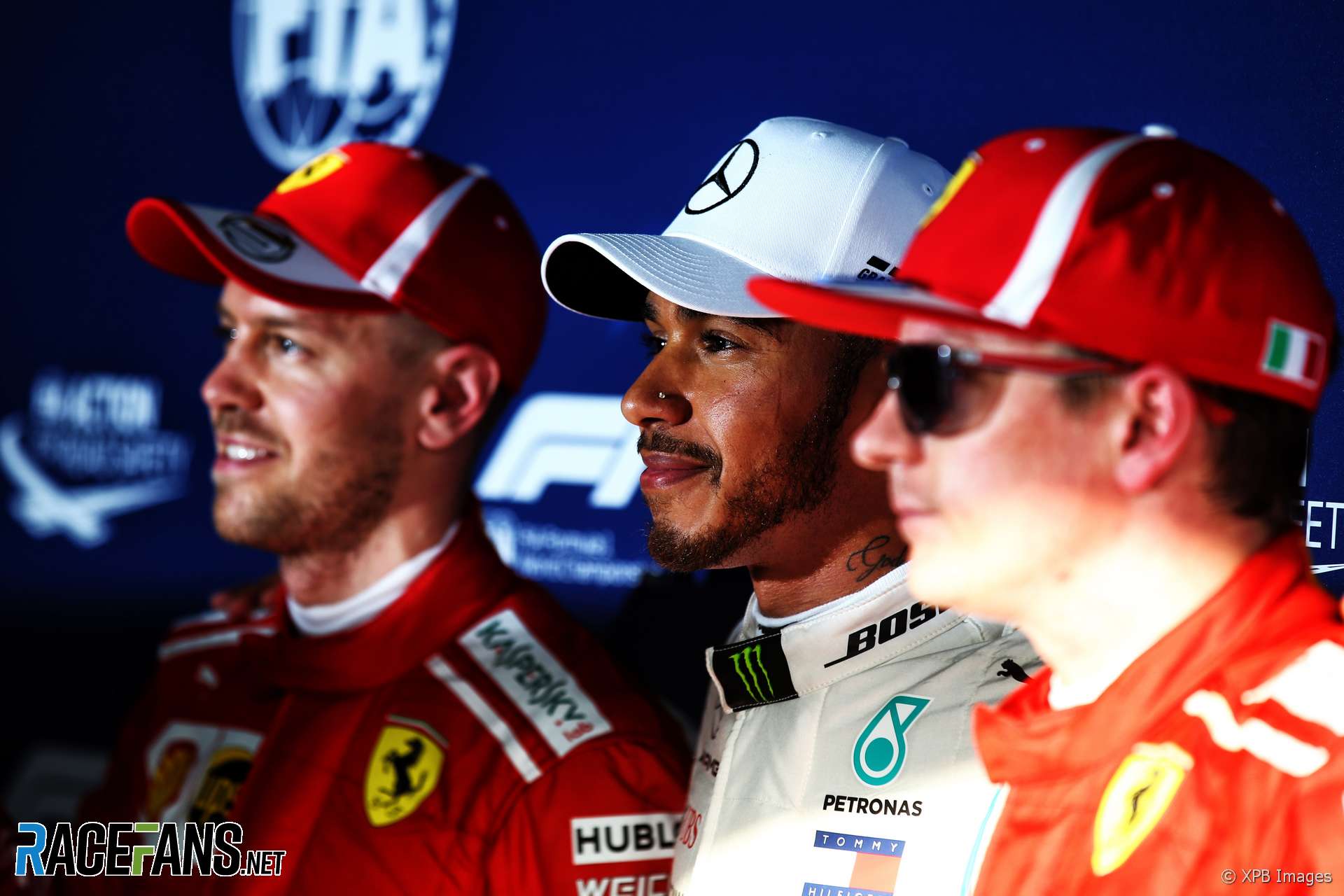 It looked like F1 was on course for a close, three-way fight for pole position.

But a stunning final lap by Lewis Hamilton left him six-tenths of a second clear of the Ferrari drivers and the Red Bull pair.

It wasn’t an entirely successful session for world champions Mercedes, however, as Valtteri Bottas crashes out at the beginning of Q3.

The track was still improving rapidly following the morning rain as first practice began. That meant drivers settled into runs of several laps to take advantage of the evolving conditions.

Raikkonen set the pace initially before he was displaced at the top of the times by Hamilton. But the focus of the first session was which drivers would make it through into Q2.

The fight turned out to be largely between the Williams, Sauber and Toro Rosso drivers. However Esteban Ocon almost fell victim to the rapidly-improving track. He completed his final run early and Brendon Hartley came close to knocking him out – had he not made a small mistake at turn one he might have done so.

Neither Toro Rosso went through as Pierre Gasly, who was initially the quicker of the two, went off at turn three and ended up last. The pair were separated by the two Saubers, Marcus Ericsson fractionally ahead of Charles Leclerc, and Sergey Sirotkin. A late improvement by Lance Stroll earned him a place in Q2.

Q1 started with Hamilton becoming the first driver to break the track record at Albert Park, lowering his own benchmark from 12 months earlier. But by the end of the session that time had been beaten by another driver – Vettel, who produced the first sub-1’22 lap of the weekend, setting up an exciting battle for pole position.

Meanwhile Red Bull were exploring strategy alternatives. Both Max Verstappen and Daniel Ricciardo opted for the super-soft tyres instead of ultra-softs, meaning they will start the race on the harder compounds.

The shoot-out for the top 10 places brought heartbreak for McLaren. Fernando Alonso and Stoffel Vandoorne were on course to reach Q3 before the final runs began. But at the Haas and Renault drivers improved their times, both were eliminated.

The Force India pair also failed to progress any further. Sergio Perez told his team on the radio he’d driven “a hell of a lap”, adding: “We’ve got a lot to do, eh?”

The top 10 shoot-out was only a few minutes old when Valtteri Bottas got greedy with the exit kerb at turn one and spun his Mercedes hard into the turn two barrier. He was unhurt, but the crash left him on the fifth row of the grid at best.

Hamilton in the sole remaining Mercedes set the pace once the session restarted, but there wasn’t much in it. His first effort was a 1’22.051, slightly down on the best time from Q2, perhaps due to the drivers being warned about fluid left at turns one and two following his team mate’s crash.

Verstappen, now back on ultra-softs, went just six-hundredths of a second slower with his first effort. Incredibly, Vettel got even closer, splitting the pair. But there was still a few minutes left for drivers to have one more run.

But if the pecking order looked close before the final runs, it didn’t afterwards. Hamilton unleashed stunning pace from his Mercedes, slashing almost a second off his lap time, and lowering the track record to 1’21.164 as he moved the benchmark far beyond anything his rivals could manage.

An error by Verstappen cost him a place to Raikkonen, who also edged Vettel to the second spot on the front row. Vettel ended up a tenth of a second off his team mate after making a mistake at turn 13.

The Haas pair delivered on their potential by qualifying sixth and seventh, ahead of the Renaults, and will gain a place from Ricciardo’s penalty.

200 comments on “Hamilton storms to pole as Bottas crashes”