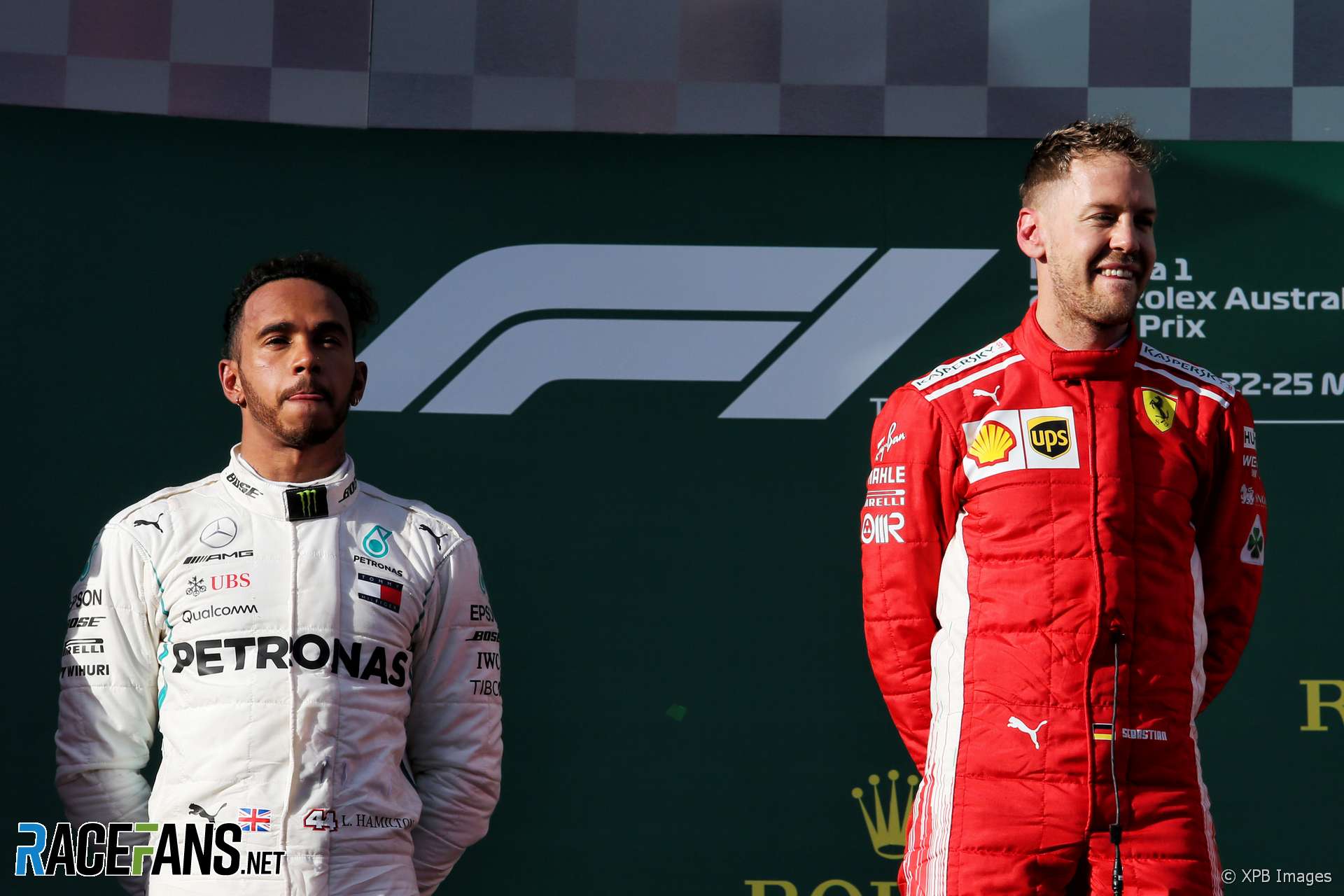 Lewis Hamilton took pole position but on race day Sebastian Vettel jumped ahead of him in the pits and led him to the chequered flag. But the similarities are only superficial.

“Last year we had more pace”

In 2017 Vettel was clearly the quicker of the two in race trim. He hounded Hamilton until Mercedes, fearing Ferrari would attempt to undercut them, brought the leader into the pits. When Hamilton came out he lost time behind Max Verstappen, and Vettel was easily able to jump ahead of him.

This time Vettel not only wasn’t the quicker of the two, he wasn’t even the quickest Ferrari. Kimi Raikkonen out-qualified him and was four seconds to the good when the drivers began making their pit stops.

There were occasions last year – notably Monaco and Hungary – when Ferrari operated their strategy in such a way that it was clear Vettel’s title chances took priority. Here again he came out ahead when Raikkonen was arguably quicker. Were Ferrari favouring their top-scoring driver of the past three seasons as early as round one?

No: Ferrari did what you try to do when your cars are running second and third. Ferrari did what they did in Sochi last year under similar circumstances. They ran one car short and the other long, trying to cover both strategic bases.

Track position is king, especially at a track like Melbourne, considering by some teams the second-hardest track to overtake at after Monaco. Get one of your cars ahead and hope the cards will fall you way. Unfortunately for Hamilton, that’s exactly what happened when he was caught out by the Virtual Safety Car.

When a driver takes the chequered flag in first place and tells his team on the radio “we’re getting there, we have some more work to do”, they clearly aren’t trying to pass off a lucky win as a demonstration of their superiority.

“At the moment we’re a bit worse off,” Vettel admitted afterwards. “Last year we had more pace at this point.”

He even had the grace to admit he wasn’t quite on a par with his team mate. “If you look at the gaps the whole weekend and we’re not yet a true match,” said Vettel. “Obviously we had very good pace today, Kimi was very strong in the first stint. I think I was probably a tiny bit stronger in the second stint but it was a different race for us.”

Hamilton wasn’t the only one who lucked out. Raikkonen did too, arguably doubly so, for had his team mate’s final Q3 lap been clean they would have started in the opposite order and he, not Vettel, would have found himself on the winning strategy. Missing out on a substantial chunk of pre-season testing mileage compared to his team mate clearly didn’t cost the 2007 champion anything. The question now is can he sustain this form and regularly compete at – or even above – Vettel’s level?

Meanwhile Raikkonen’s opposite number had Mercedes had exactly the start to the year he did not want with his 2019 contract hanging in the balance. Valtteri Bottas not only ruined his own race by crashing in Q3, but by being absent from the fight at the front he made it harder for them to resist Ferrari’s advances.

Red Bull stuck in the pack

Another similarity between this year and last was that Red Bull didn’t figure in the battle for the lead. But this too may prove deceiving. The team gambled on starting both its cars on super-soft tyres instead of the softer ultra-softs. This might have made sense for Daniel Ricciardo, whose starting position was going to be compromised anyway by his three-place grid penalty. But it didn’t pay off for Max Verstappen.

Verstappen was on course for third before slipping up in Q3. That left him fourth with the Ferrari-powered Haas duo behind him. But his raced began to go wrong soon after the start.

After the race Hamilton made several remarks about how strong the Ferrari was in a straight line. Heading into turn one for the first time Kevin Magnussen made full use of his prancing horsepower as he drew alongside Verstappen in the braking zone and swept by.

“As soon as he was behind the Haas, knowing how tough it is to overtake around here, [he] absolutely went for it,” explained Red Bull team principal Christian Horner afterwards.

Verstappen dialled his usual massive-aggressive approach up to 11. But he overstepped the mark and began to create problems for himself.

“He got a bit wide in [turn] 11/12 on lap six. That damaged the rear diffuser and that created a significant imbalance for him which he did incredibly well to manage for the rest of the race. But then that caught him out with a spin at turn one.”

The spin promoted Romain Grosjean up to fifth in the other Haas, pursued by Ricciardo, who had performed one of the race’s few overtaking moves on Nico Hulkenberg. Strikingly, he did it outside of Melbourne’s three DRS zones, the FIA having added an extra one in a bid to increase overtaking.

This was the point at which the Red Bull drivers’ raced intersected as Ricciardo moved forward and Verstappen fell back. Verstappen’s problems multiple as, having damaged his tyres, he pitted early and also lost out because of the VSC. Fernando Alonso got out of the pits with a one-tenth margin over Verstappen and that earned him fifth place.

With Ricciardo also spending most of his afternoon in traffic, Horner lamented afterwards the race had given them a poor read on the ultimate performance of their car in race trim. However there’s every indication they’ve begun 2018 in far more competitive shape than they were in 12 months ago, and perhaps even in better form than they were in at the end of last year.

If Hamilton felt hard done by, that surely paled in comparison to what happened to Haas. Whether Melbourne is a strong track for them, or the nature of their arrangement with Ferrari means they usually start the season better than they finish it, or both, once again they performed strongly at Albert Park.

Fifth and sixth on the grid was their best ever combined starting positions. After Verstappen’s spin they were fourth and fifth. Even if both Red Bulls had got back through, a finish or sixth and seventh would have been an excellent reward. Losing both cars to failures incurred during pit stops was a galling outcome.

The team may find consolation quickly as the teams head to the heat of Bahrain for the next round: “I do think we are better in hotter temperatures,” Magnussen admitted on Saturday. Grosjean said much the same, and also pointed out several times he had been quicker than his team mate before the pair dropped out.

Their loss was McLaren’s gain. The orange team scored as many points as they had in any of their races with Honda over the last three years. “The contrast to last year is quite big,” said Stoffel Vandoorne. “I think there is massive potential for the future.”

But the quality of the core product remains the biggest concern. Round one has already shown Mercedes and Ferrari are potential race winners again, and Red Bull are going to be in the mix at some tracks too. Renault and McLaren showed the most year-on-year progress, so the advantage enjoyed by the ‘big three’ may not be as depressingly large as it was last year.

The difficulty of overtaking at Melbourne caused some concern. But this was also true 12 months ago. More importantly, passing isn’t everything: there may have been 47% fewer overtakes in 2017 than 2016, but we also had a proper championship fight between two teams for much of the year. That matters more, and the good news on Sunday was we look like getting another one.

Also, grid girls were absent and Halo was present, and neither of these hotly-debated changes seemed to make the slightest difference to the spectacle.