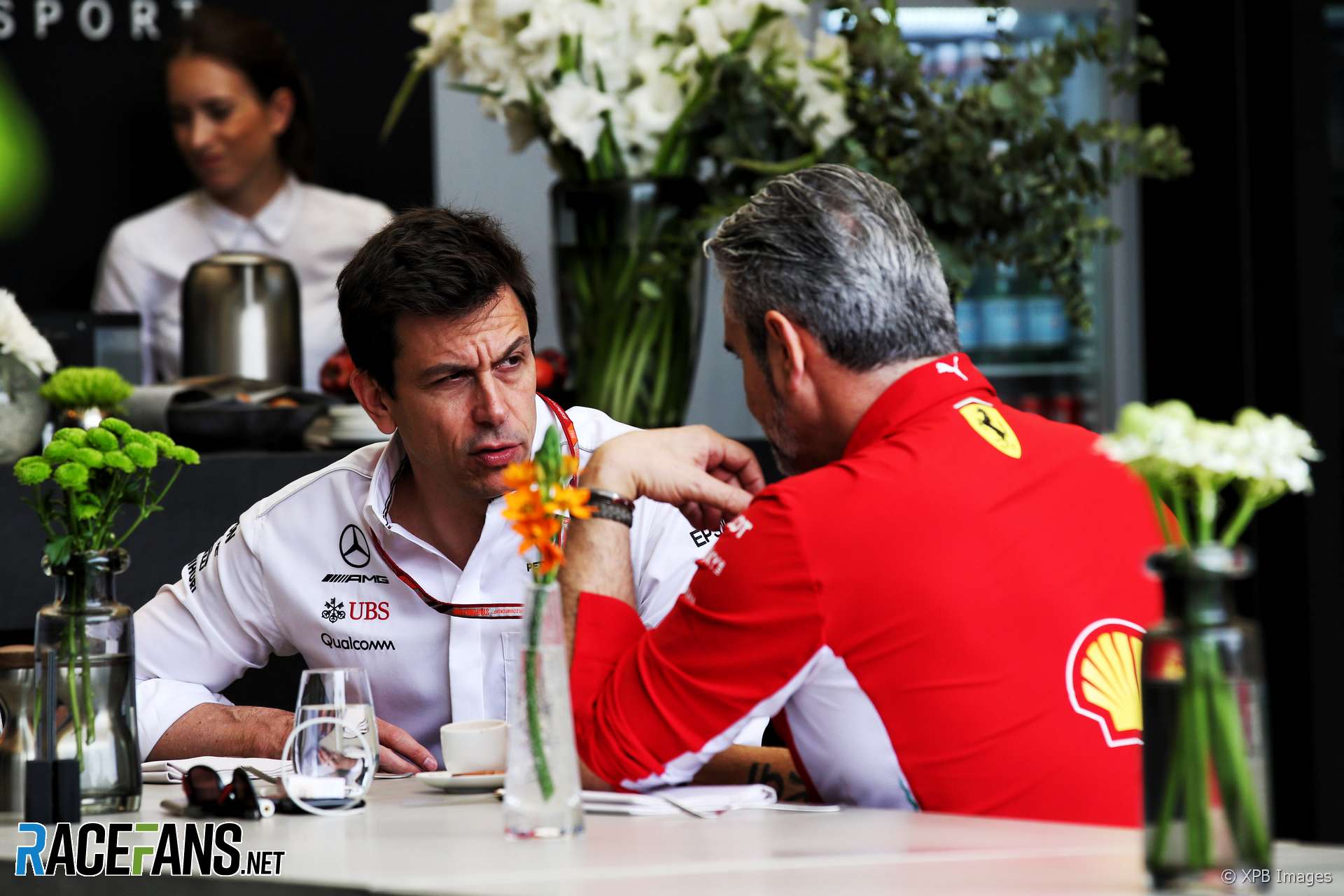 While the teams limbered up on the track, the paddock chatter was all about 2021, as F1’s owners presented its vision for the future. @DieterRencken brings his perspective from Bahrain.

A frisson of excitement runs through the paddock as the first team bosses return from their summit with F1’s commercial rights holders. Their faces are a study of the differing implications of F1 owner Liberty Media’s vision for the sport on their operations.

Clearly Mercedes and Ferrari bosses Toto Wolff and Maurizio Arrivabene respectively are mulling over the implications of a $150m budget cap and, in the latter instance, also trepidation about telling his boss Sergio Marchionne, who cancelled his visit to Bahrain at the last minute, that the Scuderia stands to lose at least 60 per cent of bonuses. By contrast, independent team bosses seem delighted…

Although all refuse to speak, citing a (verbal) confidentiality agreement amongst delegates and refer the media to a (to-be-released) media release, it is clear that most are willing to talk behind closed doors, so it becomes a matter of journalists jockeying for leaks amongst their sources.

The media release arrives around noon. It proves to be a study in blandness, and leaves most journalists utterly underwhelmed. Saliently it contains no comment from F1’s regulator, the FIA – which had no official input into the meeting – which suggests Liberty’s vision is far from a done deal. The only outside comment comes from Aston Martin CEO Andy Palmer, who was not present, who welcomes F1’s “prospective changes”.

On grand prix Friday mornings Williams traditionally treats the British media to a proper fry-up, but the later schedule in Bahrain meant it was served after noon, and turned out to be more of a brunch. Vitally, it is likely to be about the only time during the weekend the media get to have bacon.

The brunch also proved an ideal opportunity to elicit views from colleagues about Liberty’s proposals: Too little to be introduced too late with too much pandering to Ferrari is the common consensus.

When it comes to grand prix media facilities, we have simple needs: comfortable, affordable accommodation situated in reasonable proximity to the venue; reliable shuttles and / or parking situated close to the media centre; fast, free and stable internet and some sort of telephone service to eliminate roaming charge horrors; and, last but not least, some form of refreshments, particularly where the event runs into the evening.

Some venues tick some boxes, some zero. Monza, for example, one year provided only a water dispenser and parking under some trees in a muddy field, while China charges £100 for (blocked) access internet that invariably crashes at some stage. Others manage two or three out of four. Bahrain, though, provides all four – even if shuttles do run to erratic schedules – leading us to agree that, professionally speaking, Bahrain is our ace event.

Bahrain’s hospitality was put to the test as FP2 started as a number of us made our ways through the fan areas as we headed for the GP Club, as the circuit calls its media canteen. Why not watch proceedings in the media centre, I hear you ask. Post-FP2 media sessions run from the end of practice to 2230 – followed by much writing – so the only opportunity of dinner was to follow the action on TV while eating.

The meal did not disappoint: minted lamb chops, prawn biryani, Chinese chicken, crispy salads and a spread of desserts. After such delicacies we had absolutely no issues about heading back to face what turned out to be a long night shift.

Most heartening of all was, though, that the fan area was absolutely packed, proving just how much traction the event has gained recently. There was a time when one could count the number of fans present, most of whom would be visitors from Europe, or ex-patriates working the Gulf region.

Later we share the shuttle back to the city with a few Joe Publics who had stayed on after FP2 to attend the Santana concert in the stadium across the track. Midnight traffic jams prove just how much music festivals have become a part of modern F1.