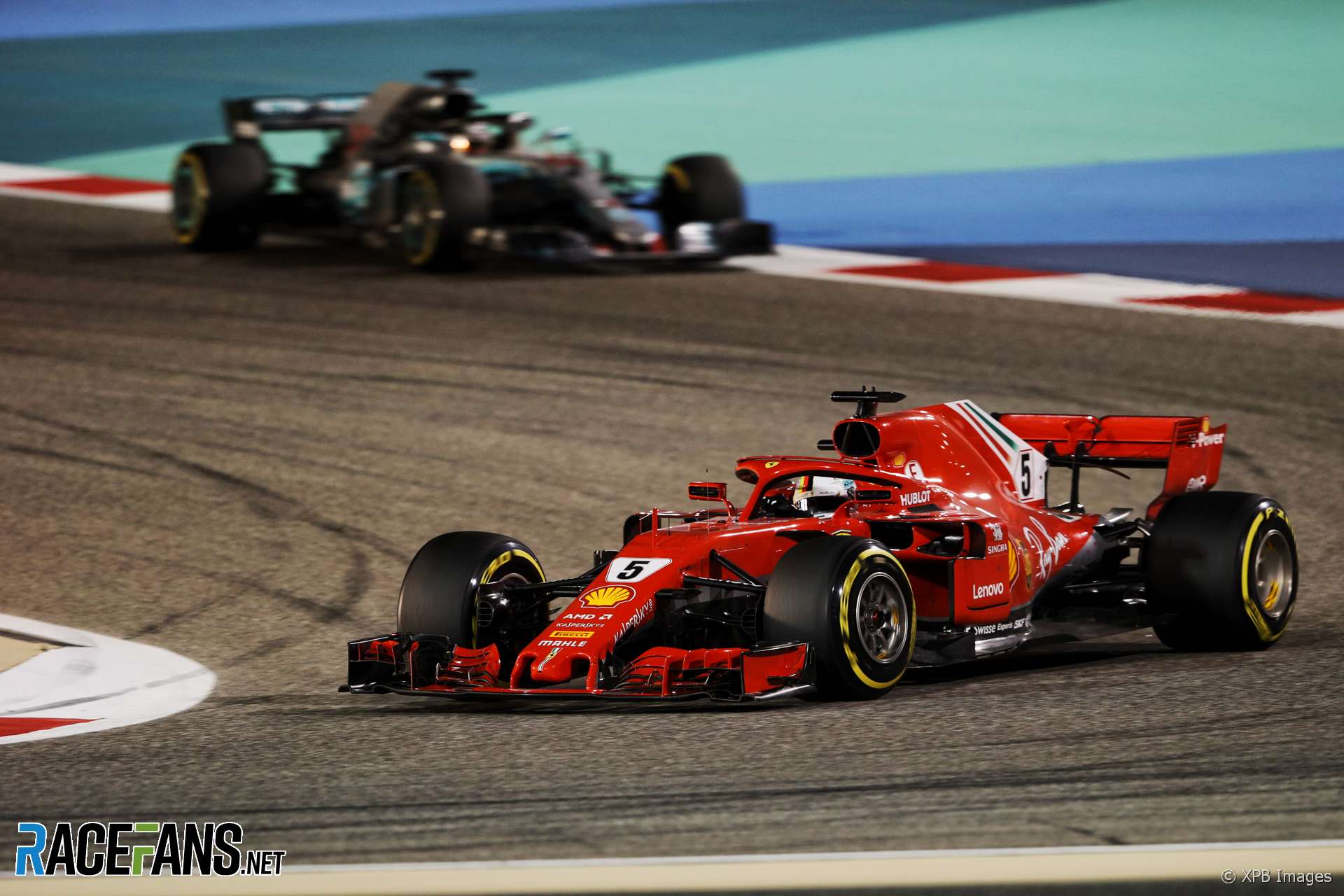 Did Valtteri Bottas blow his chance to win the Bahrain Grand Prix?

The Mercedes driver spent the second half of the race closing on leader Sebastian Vettel. But he didn’t get close enough to try a move until the final lap.

Could he have caught the Ferrari sooner? Bottas said the team was initially unsure whether he needed to, as to begin with they were convinced Vettel was going to make another pit stop. However they began to realise Ferrari had scrapped its plan to bring Vettel in again.

“Maybe 15, 20 laps before the end I got the information that said he’s definitely going to run a one-stop as well and most likely will struggle in the end,” said Bottas. “Before that we were 80% sure he was going to go with a two-stop.

Deciding how hard Bottas should push at this stage was a double-edged-sword for Mercedes. The more they increased his pace, the more life they would take from the tyres. “If I’d pushed earlier at the some points it’s difficult to say if it would have helped, if I would have struggled more at the end,” he said.

As the race chart below shows from the moment Kimi Raikkonen came in for his second pit stop, Bottas began to drift away from Vettel, losing around four seconds. Then with 15 laps to go he began closing the gap:

Bottas’s pursuit of Vettel was also compromised by a problem which was a theme of Mercedes’ weekend – overheating tyres.

“Pretty much all the race, 80% of the race, I was stuck with not being able to push more because of the tyre overheating. I was driving to a temperature limit and if you go over it for two corners in a row you lose a lot in the third corner. I think that is a limitation we have with the car.”

Should Mercedes have told Bottas to increase his pace sooner? Lewis Hamilton said the team needed to work on its communication after the race and Bottas also felt “there are things we could have done better.”

“For us we need to know exactly how much to push and so on,” he added. “You always learn something from every race, for sure we can learn from this one.” The crucial question for Mercedes will be how much life was left in Bottas’s tyres compared to those of Hamilton, who also ran the medium tyres in the final stint and took 19 seconds out of Vettel in fewer laps.

Despite the delay to his pursuit of Vettel and losing more time in traffic (“with the cars this year it’s again more difficult to follow”, he said) Bottas was within two seconds of Vettel with five laps to go. On lap 52 he was over a second quicker than Ferrari, and it seemed certain he would get close enough to pounce.

Yet despite Vettel’s lap times getting slower over the final laps, Bottas was unable to make a move:

Both drivers were on very worn tyres by this point. Bottas was using a more durable compound which was two laps’ fresher than Vettel, yet he had the disadvantage of running in the slipstream of another car.

“The last three laps was getting really tricky on the tyres for me as well. About five laps before the end following him was actually starting to affect [the car]. “Lap five, four, three the tyres started to switch off and lap three, two, one was very difficult.”

It wasn’t until the halfway around the penultimate lap that Bottas finally got close enough to use his DRS to attack Vettel. As the final lap began they were separated by seven-tenths of a second. As the cars hammered into the braking zone for turn one, Bottas decided the Ferrari was too far ahead to risk a lunge.

“I was watching him, see if he is going to leave any door open or if he was expecting or not expecting me to try something. Before he started to brake he turned the car so he was expecting and being ready to block the overtake so I understood there was no possibility.

“You could always try to go for it, bang the wheels and have a crash but I think it was just a bit too far. Not that much, only a few metres away and could have gone for it but it was just a little bit too far.”

Those hoping for a dramatic last-lap tussle between the pair were to be disappointed. For Bottas there was arguably more than just a race win at stake in that moment – he needs to make his case for a third season at Mercedes, and snatching a win from Ferrari would have been the perfect way to do it.

He intends to spend some time thinking about whether he should have been a bit tougher with Vettel.

“That is something I definitely need to analyse,” he said. “But once you start to brake late you can’t any more really change the line. I braked later than normal and tried to see if that could be enough for me to dive inside. But in the middle of braking I realised that wasn’t going to be possible and then it’s too late to back off.”

85 comments on “Analysis: Why Bottas couldn’t pass Vettel – or catch him sooner”