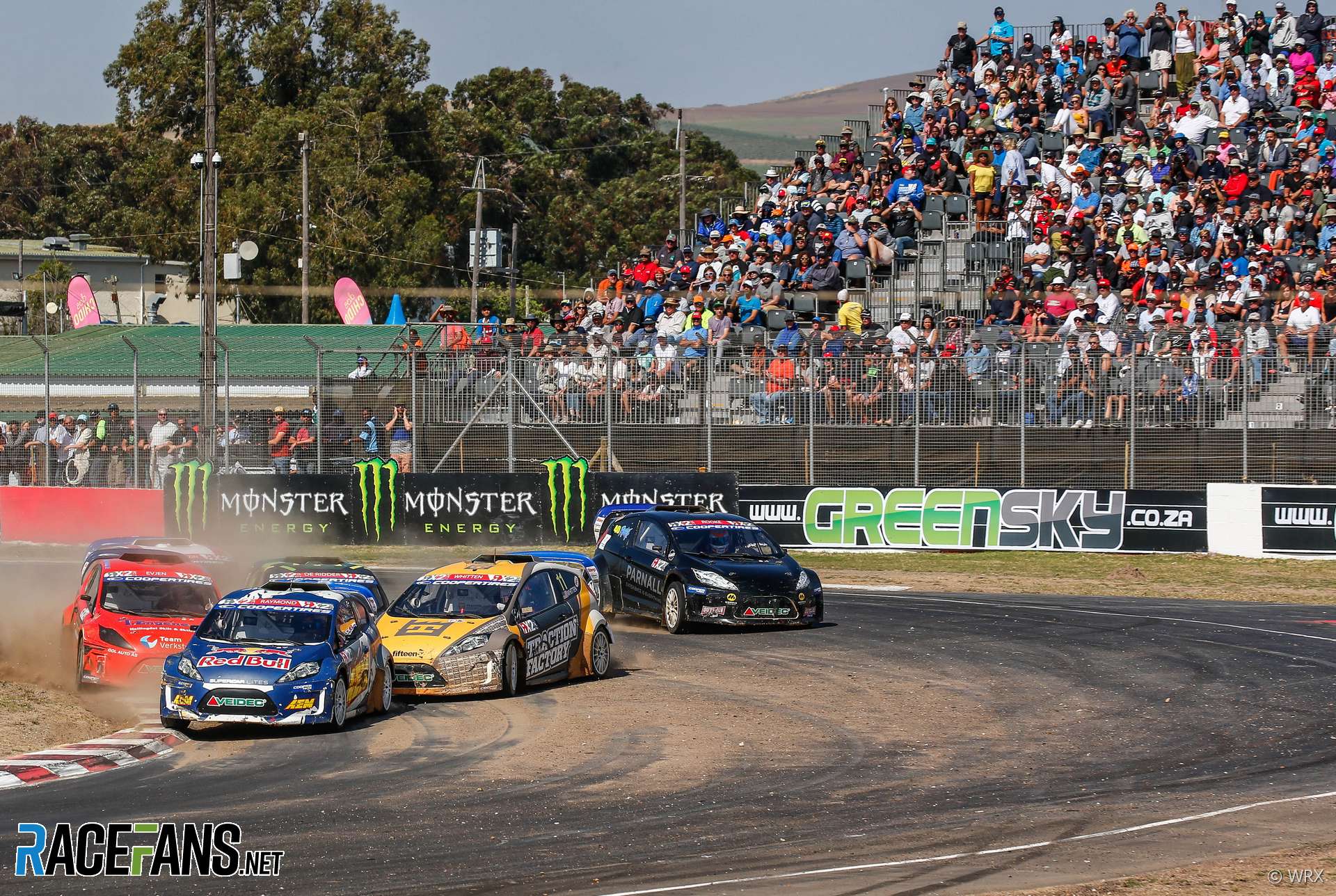 Since 2014 the FIA has initiated two new world championships: Formula E and World Rallycross. Dependent on the metric, either could claim to be the fastest-growing series – but in the latter’s case it is not difficult to see why it has gained traction across the globe.

The race format features bite-sized elimination heats contested by ferocious pocket rockets that pop-bang their ways around tight asphalt / gravel circuits as household names such as Sebastien Loeb, Matthias Ekström, and Petter Solberg muscle around (and, more often than not, into) each other.

The action is frenetic, the racing invariably door-to-door-handle close, accompanied by noise levels F1 would envy, let alone FE. In short, WRX is ideal for those who crave their entertainment in short, sharp doses, or those seeking back-to-basics motorsport. In times of sterile motorsport, WRX provides the antidote many seek. Breath of fresh air? Make that dusty air. Very.

Rallycross has its roots in a need by TV producers for a plug-and-play, all-weather motorsport genre. The sport quickly found favour among enthusiasts who sought sideways action without trekking through muddy forests. When the 1967 RAC Rally was cancelled due to a foot-and-mouth outbreak, rallycross plugged the gap. It went on to enjoyed a boom which lasted until the nineties before going off the boil.

“I said ‘No’, so he suggested we take a look,” recalls Bellamy. “We met with two gentlemen who were journalists, and lived and breathed the sport. They were helping the FIA to centralise it. There were lots of individual events [but nothing properly structured].”

IMG negotiated a 20-year commercial deal with the FIA – “Unusual, I know, because most deals are for five years, but I pointed to F1’s 100-year deal…” – which got the ball rolling. From a start from zero in 2014 the series now boasts 12 rounds.

“We’ve done a very good deal with the FIA, they actually share in future successes, and so we’ve got a good working relationship with them. It’s important to have that length of time, otherwise you invest less.”

Although Bellamy refuses to be drawn into specifics, he admits that, “There’s a revenue share element to it, with us taking all the [financial] risk.”

Equally, the teams do not (yet) share in the revenues for the simple reason that IMG has yet to see a return on investment. However, in return for their participation they have a global platform upon which to compete.

The overall concept is simple: manufacturer-backed teams operated by private entities – Audi Sport’s entries, are, for example, operated by EKS, the team founded by 2016 WRX champion Mattias Ekström – with IMG taking providing the playgrounds, TV coverage, and promotion in conjunction with local promoters.

Although the series is Euro-centric – with nine rounds in mainland Europe, Britain and Scandinavia / Baltics – the three events in Canada, South Africa, and, from this year, USA, justify the “World” tag. What, though, about Asia, particularly given that the region is by some margin the world’s largest car market?

“We’ve had six different potential promoters visit us over the last few years for China. We’ve made recce trips to China; we view that as the next frontier. [However] Circuit of The Americas (Austin) came along. We’ve got 12 events next year; we’re promoting ourselves at CoTA; we’ve got to build a track,” he says before mentioning that ERX – an electrified version of RX – will aid the Asian cause. More on ERX later.

Clearly Bellamy has big plans for the sport, which received a massive boost when Cape Town and the Circuit of the Americas joined the trail. But how to market WRX to audiences – live and TV – that five years ago did not even know that rallycross as a sport existed, let alone held world championship status?

“So there’s two audiences we’re playing to at the moment, and the difficulty we have with broadcasters is that they believe digital (streaming) could be a threat to them.

“So we say ‘We actually need to find a way to work with digital, because digital is not a threat.’ It’s a way of enhancing your programmes. So we’re live for two hours on a Sunday afternoon, but we also have all this action on Saturday. If we use digital to push people towards [TV] programmes on Sunday, we all win.”

Clearly it is the younger demographic that is drawn to WRX – during Cape Town’s inaugural round the average age was estimated to be under 30 – which is gold dust to motor manufacturers who increasingly yet face challenges in connecting with the ‘iThing’ generation in what has become a disrupted automotive market.

Hence they’ve turned to WRX, which now features teams supported by Audi, Volkswagen, Peugeot, Ford, Renault and MINI, with rumours of a return by Citroen. Should ERX eventually mirror Formula E – there is no reason to believe it won’t – ERX could potentially have ten manufacturers represented within a few years.

Indeed, as FE is F1’s “green” foil, so ERX could well rallying’s environmentally-friendly equivalent. Why is electrification so attractive to ERX? Simply put, the performance drivers in rallycross are lightness, four-wheel drive and dollops of torque, which in turn provide ferocious short-burst acceleration coupled with superb traction out of corners – most of which are on loose surfaces.

Electric motors are cheap, easily mountable – one per axle or wheel to provide 4WD – and have linear torque curves from zero revs, coupled with light weight. The downside is battery mass; however, WRX races run to around ten minutes all-in, with breaks between heats providing windows for battery swaps. If the batteries can withstand WRX-type jostling, they are safe for road use. In short, electrification provides a cost-effective mix.

How does Bellamy go about selling WRX / ERX to the manufacturers without whom privateer teams would not have hardware?

“They are buying into a platform with really cool content,” he says, “and they can put that out to their next generation of car buyers, for whatever brand. [The cars] look spectacular, and kids go ‘Actually, that car’s quite cool. I can see that on my driveway, or my parents’ driveway.’

“From a manufacturer perspective they can sell cars off the back of this. And secondly, through hitting the kids through content on social media with really cool stuff, cars going sideways and over jumps and being airborne, that’s great [for image].

Certainly, Audi Sport’s Dieter Gass is bullish about WRX’s future, and more particularly about the ERX angle: “The programme started as an idea basically between our marketing guys and Mattias Ekström, having the vision at the time that RX is a championship which potentially is immediately usable for electric racing without basically any modification,” he explains.

The “extremely exciting” action is an obvious draw. “It’s really spectacular, and you have a good competition. Having said that, something which we need to be very careful and wary about, the costs need to remain controlled. And again, [with other] manufacturers coming in, the risk is that costs explode, and I don’t think WRX can afford that.”

Although the regulations call for production-based body shells and mechanicals, for 2018 WRX has introduced further limits on the number of components such as turbochargers, with the quantity of engines used during a season reduced to two and tyres restricted to 12 per event. This is crucial given that teams do not share in the championship’s revenues.

“Everybody agrees wholeheartedly that we need to manage costs, to keep them low,” agrees Bellamy. “In fact, the entry level needs to be at a manageable level for teams and privateers. Manufacturers come into the series, stay in for a couple of years, and then just go.

“We’re probably quite fortunate that we’ve got a very strong European series, with (non-manufacturer-backed) privateers as well. It’s becoming oversubscribed, and we need to manage that,” he adds. “We sit on the FIA Technical Working Group, and any recommendations then go through the Rallycross Commission, on which we sit.”

How do the competitors view the championship? Few can offer a more informed position on the place it occupies in motor sport than Ekström. Not only did he win the WRX title in 2016, he previously enjoyed success across a breadth of disciplines including the DTM (where he was the 2004 and 2007 champion) and Race of Champions (three titles). He’s also raced in V8 Supercars, NASCAR Sprint Cup and made eight appearances in the World Rally Championship.

On top of that Ekström participated in the European Rallycross Championship and now co-owns EKS. So why did he go into the team ownership in what was then a fledgling championship?

“I think rallycross is really a great type of series,” says the 39-year-old Swede. [The Audi] Quattro I’ve liked since I was a kid. Big, powerful cars I also like because I grew up in a rallycross world with my father. When it became a world championship, I thought I might help it gain a bit of status; they were getting more serious, with the competition moving from amateur level to a professional level.

“So I thought that was good, then at about the same time as I was having these thoughts the Audi S1 was launched. So I thought it’s too many good things, the sport, everything coming together.”

He admits he is “normally picky”, so the challenge was to establish a team unto his own vision, yet manage it is what he refers to as “Audi-style” He does not deny that part of the attraction was to facilitate the return the hallowed Quattro brand “back to the race track, as in the good old eighties.”

Is Ekström, though, concerned about a cost explosion now that more manufacturers are involved?

“No, because now there are [more] cost savings coming up, and still it’s relatively small budgets compared to other motorsports. So for me, if the costs could stay on this level where we’re at now, call it ‘value for money’ would be higher, then there would still be a good business case. Because I don’t believe there will be too many who can keep investing more than we’re at now.”

Obviously he won’t talk budgets, but according to sources the budget for a two-car team now runs out at around £10m, which given the series’ world championship status and rounds on three continents is something of a bargain. Energy drinks are prime targets for sponsorship, with both market-leading brands – Red Bull and Monster – heavily involved in WRX.

The fifth running of the FIA World Rallycross Championship kicks off in Barcelona this weekend. To whet your appetite, enjoy the spectacular finale from the 2016 round at Estering in Germany, where Ekström clinched the title despite falling prey to a spectacular move by Kevin Eriksson: