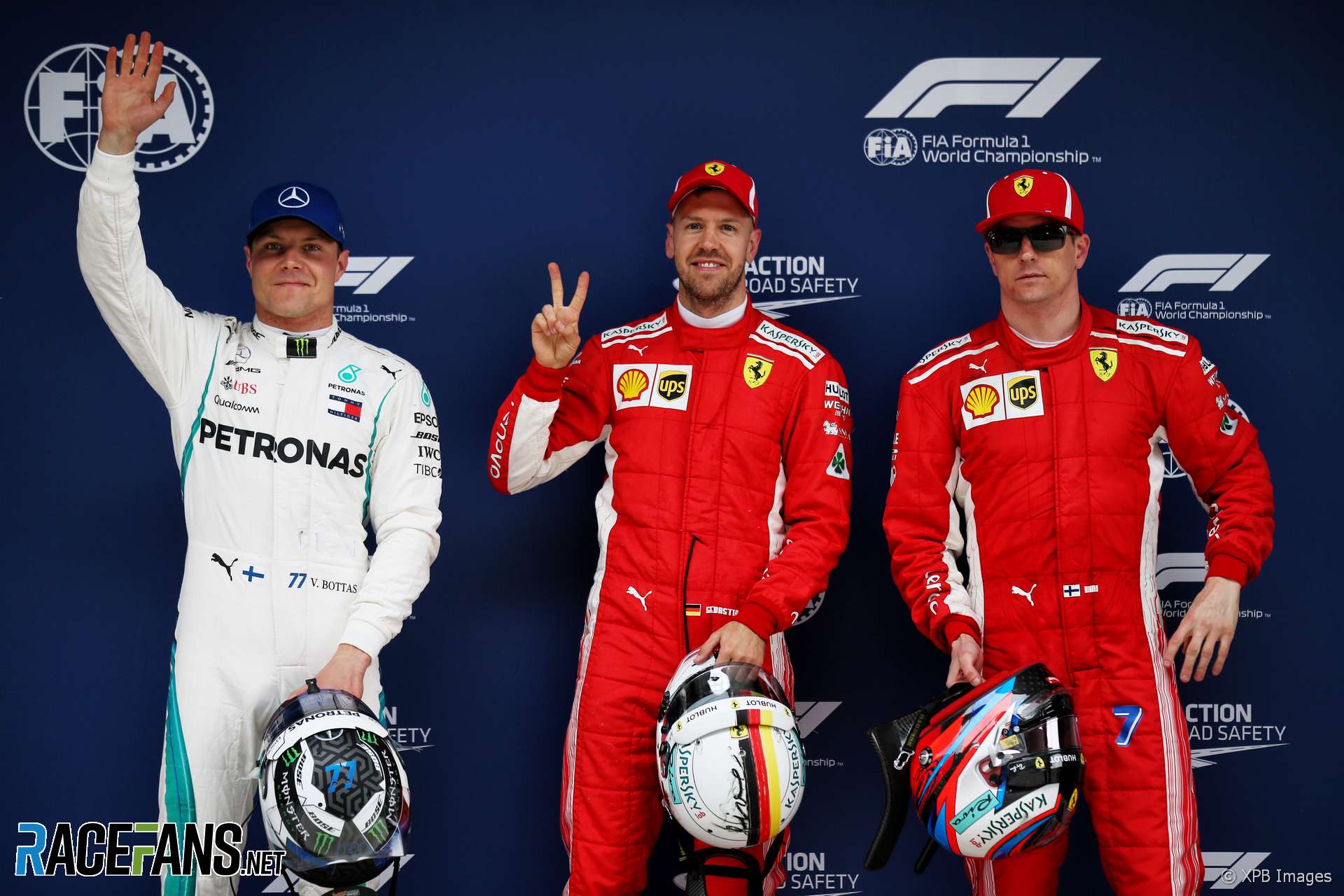 In an unusually cold qualifying session the Ferrari pair bumped the Mercedes of Valtteri Bottas and Lewis Hamilton back to the second row, and all four will start on the harder soft compound tyres.

The story of Q1 was how Daniel Ricciardo, in his hastily repaired Red Bull, made it onto the track with seconds to spare and grabbed a place in Q2. A power unit failure in final practice meant his mechanics had to scramble to get the car repaired. He headed out with just enough time to make the cut.

It was close, however. Ricciardo ended an otherwise tidy lap by running wide at the turn 14 hairpin and crossed the line in 13th place, just three-tenths of a second outside of the drop zone.

The Sauber drivers were rooted to the bottom of the times. Marcus Ericsson ended the session almost half a second off team mate Charles Leclerc, despite the rookie spinning at the exit of the final corner.

On his final lap Leclerc complained he’d lost a lot of time by locking up at the penultimate corner. “The rest of the lap was positive,” he said on the radio afterwards. “I’m getting there but sorry for these two errors. I’m not sure Q2 would have been possible.”

Sergey Sirotkin looked like a contender for Q2 until Ricciardo hit the track. After their strong run in Bahrain, Toro Rosso were once again struggling to escape Q1. Pierre Gasly didn’t make it but Brendon Hartley did, grabbing the last place by a few hundredths of a second.

Vettel ended the first part of qualifying on top, an impressive seven-tenths of a second ahead of the fastest Mercedes driver, which was Bottas. Hamilton was over a second behind.

Ferrari and Mercedes opted for soft tyres at the start of the session, indicating they intended to start the race on the harder rubber. After the first runs the red cars were comfortably ahead, but the Mercedes pair went out on another set of softs and moved ahead. The Ferrari drivers did their final laps on ultra-softs, apparently getting sighter laps in for their critical Q3 runs, setting fast sector times before pitting.

Nico Hulkenberg was the quickest ultra-soft runner, ahead of Romain Grosjean and both Red Bulls. Behind them the fight for the final Q3 places was closely fought.

Despite taking a slipstream from team mate Stoffel Vandoorne, Fernando Alonso missed out the top 10 again when he was beaten by Esteban Ocon. The Force India driver was then knocked out by his team mate, who went a tenth of a second faster.

Two other drivers squeezed into that gap: Carlos Sainz Jnr, who made the cut, and Kevin Magnussen who didn’t, despite having been competitive in practice. He missed the cut by 16 thousandths of a second.

As in Bahrain Raikkonen led the way during the first runs in Q3. Mercedes offered little threat to Ferrari, Bottas the quickest of their drivers in third place. The Red Bull pair were bumped back to the third row.

Only one part of that picture changed on their final runs – but it was a significant one. Raikkonen posted a fractional improvement on his final run, but wasn’t able to match the best time through the final sector.

Vettel was superbly committed through the final corners, and that was what made the difference. For the second weekend in a row he snatched pole position from his team mate, this time by just 87 thousandths of a second.

Ferrari’s improvement left the Mercedes pair over half a second behind. Hamilton abandoned his final run, able to do no better than fourth, as he had in Bahrain.

Nico Hulkenberg was the leading driver behind the Red Bulls, while Sergio Perez moved up to eighth for Force India. Romain Grosjean fell to 10th at the end.