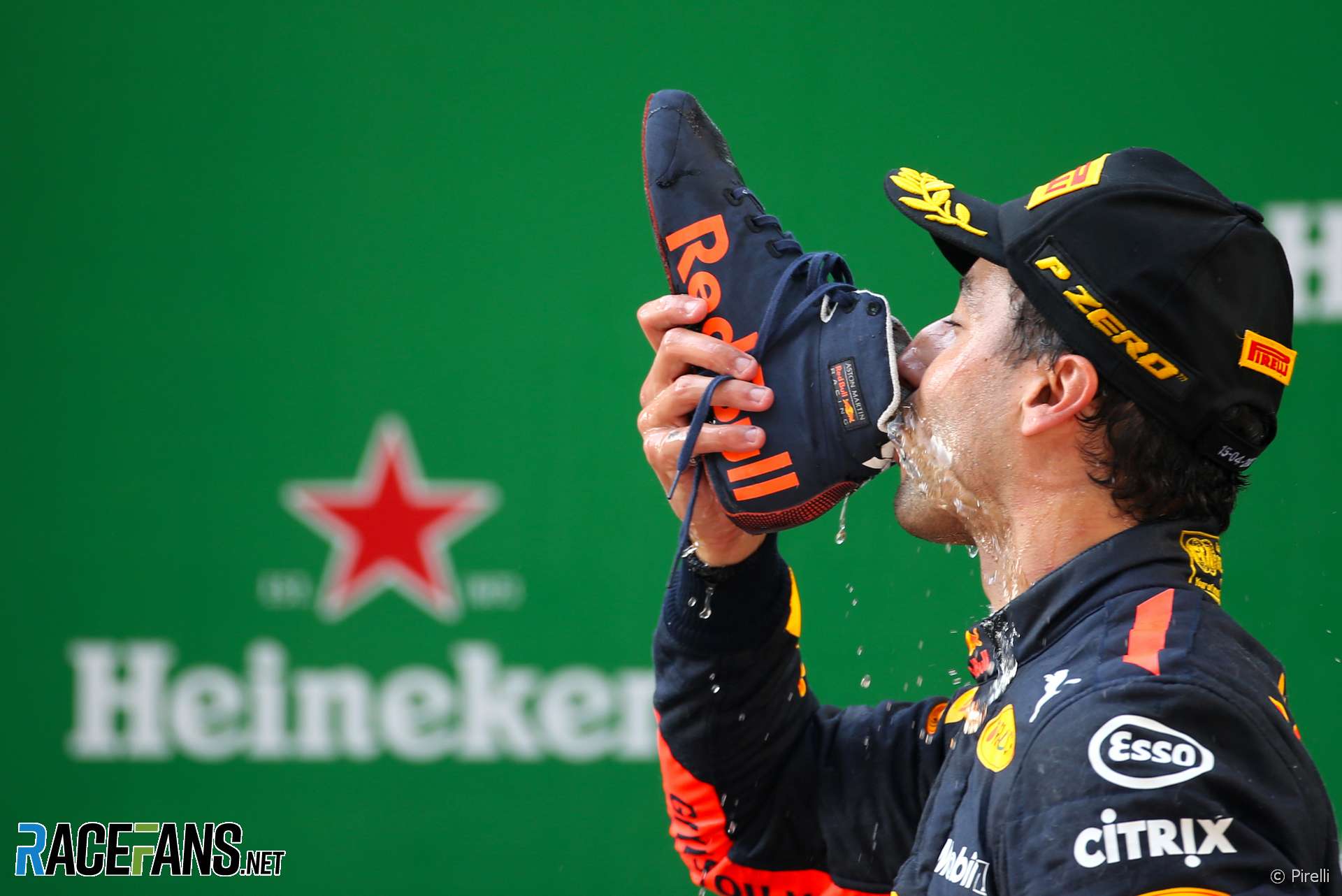 Daniel Ricciardo and Brendon Hartley shared a joke about the coming-together between the Toro Rosso drivers which helped Ricciardo to victory in Shanghai. Read the last of @DieterRencken’s China Paddock Diaries below.

Wake up after continuing my habit of getting to sleep as late as possible to stay as close to European time zones as possible, yet still pack in six hours’ sleep. The late start makes ablutions, breakfast and check-out a rush, particularly as I need to drag my suitcase to the media centre in order to depart for the airport from the circuit, but I manage to catch the 10am shuttle.

On arrival I head for Force India and a casual catch-up chat with deputy team principal Bob Fernley and head of media Will Hings. We discuss Checo Perez, perhaps F1’s most underrated current driver, one who consistently out-performs his car. Despite placing seventh in the championship for the past two years and scoring seven podiums he has failed to catch the eye of top three team bosses. Bob suggests I return for lunch later…

Time to follow up on interview material at Williams in preparation for a feature on Claire Williams. It pains me to walk in knowing the mood is depressed, particularly as the team was so upbeat ahead of the season. That’s the reality of F1 – it can be a cruel sport. Still, as always, the team handles its predicament with dignity. Although Sir Frank is now past long-haul travel, he can be proud of the team’s resilience.

Return to Force India for lunch beside the maze of water walkways that give Shanghai International Circuit its unique atmosphere. Built in 2003 in the shape of the Chinese character “Shang” (it means “above”) at a cost of (then) over £350m, SIC sits on reclaimed swampland, and hence the water.

SIC was constructed using ground-breaking techniques: the track is perched upon 40,000-plus concrete piles varying in height from 50 to 120 feet, in turn covered with polystyrene matting upon which asphalt was laid. The main grandstands resemble giant F1 rear wings, and accommodate 50,000 spectators. The circuit’s total capacity is four times that.

Ah, lunch: I choose the Asian platter – prawns, chicken skewer and squid served in spicy sauces – followed by teriyaki beef with spicy french fries. The dishes taste even better than they sound. Thanks Bob!

After the race it’s a rush to get through all interviews and get them to editor Keith before catching the 7:45pm airport shuttle. Charlie Whiting’s media briefings are always illuminating, and today was no exception: he countered all comments made by drivers in a calm and logical manner. One can’t help wondering how the FIA will replace him – particularly given he is now heading for 65.

Sit in the Emirates lounge; in strolls Brendon Hartley. “Hi Brendon,” I say, “how you doing?” As expected the Kiwi says “I’ve had better days,” before grabbing a bite. In comes Daniel Ricciardo, sees Brendon, and says with his customary broad grin, “I owe you a beer, mate…”

It was, of course, the Toro Rosso driver’s accident with team-mate Pierre Gasly that set in motion the circumstances that led to Dan’s sixth career victory. Bet it was an icy cold one. Hope it wasn’t served in footwear.

A reader had wondered what the issue was with Dan’s lower lip, and I use the opportunity to find out. Seems he inadvertently bit it in Bahrain, and swelling set in. “Nothing to worry about, though,” he says,” it’s getting better.”

With that its time to email the final Paddock Diary from China, then board the Airbus 380 to Brussels via Dubai. It’s a nine-hour flight, so some shut-eye is on the schedule. Next stop: Baku in a fortnight.