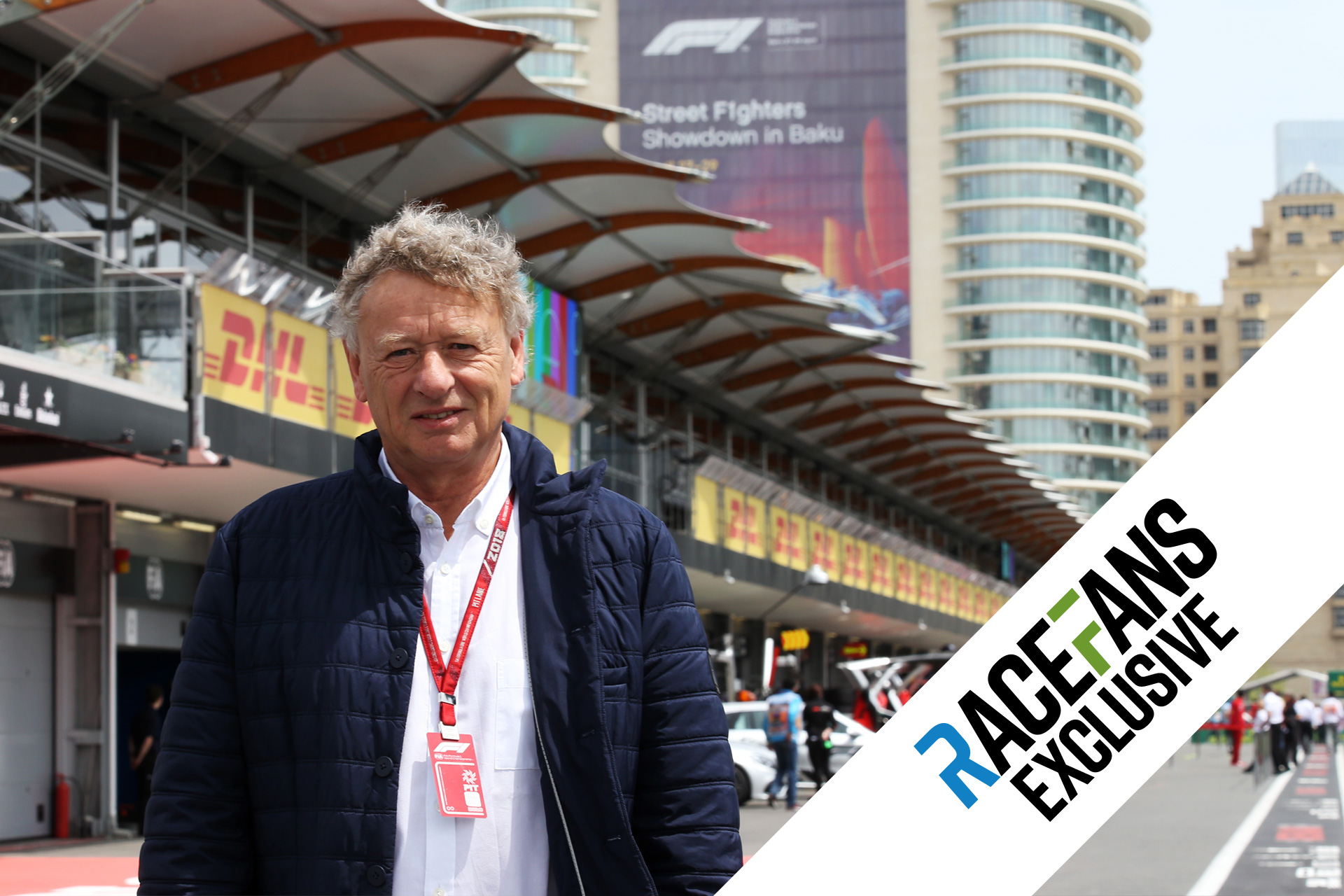 Tomorrow the City of Miami Commission will vote on whether to pursue a place on the 2019 F1 calendar with a new street circuit.

Temporary venues in city centres are a key part of Liberty Media’s plan to expand the championship into new markets. But do they make economic sense and are they good for the sport in the long-term?

Hermann Tilke has worked on the majority of tracks F1 races at. In an exclusive interview for RaceFans he sheds light on the challenges of building temporary and permanent tracks, and answers some of the most frequent criticisms of his designs.

One of the most eagerly-awaited races of the opening ‘fly-away’ rounds was the Azerbaijan Grand Prix. Last year the Baku City Circuit was adjudged to be the race of the year by many, not least RaceFans readers, and Daniel Ricciardo’s triple overtake was named the pass of the season. There were thrills, spills and controversies galore, and this year’s edition was widely anticipated.

The race delivered, so much so that as this is written the FIA is embroiled in considering a request from Williams to review no fewer than five stewards’ decisions, several handed down long after the race had finished. There’s a long way to go still in 2018, but Baku has again set the bar high when it comes to spectacle.

All this suggests that street circuits are the answer to Liberty Media’s quest to bring racing to the fans by combining city festivals with Formula 1’s ‘engineered insanity’. Suddenly the buzzword in F1 circles is ‘streets’, with downtown venues in Miami, Hanoi, Berlin and London (again) all being punted as prospective grand prix hosts.

Cape Town, too, regularly enters the frame, as do Los Angeles (Long Beach) and Copenhagen. That is eight incoming venues being proposed – or around 40 per cent of the current calendar – all on street circuit, with no talk of new races on permanent circuits. However, this sudden enthusiasm for street circuits potentially holds dire consequences for motorsport as whole, even if F1 profits in the short term.

During Liberty’s F1 reign – the NASDAQ-listed company acquired the sport’s commercial rights in January 2017 – the streets of Baku have twice hosted a grand prix and twice delivered in terms of thrills-per-second. Thus one could almost forgive F1’s owners for believing that the answer to their share price conundrum (FWONK’s current trade of $31,90 is around 25 per cent off its October high) lies in blotted-over pedestrian crossings.

However, those with longer memories will recall the likes of Valencia. If ever a venue delivered non-stop borefests it was the Circuito Urbano de Valencia, which wound its way through the city’s America’s Cup harbour. It was an uninspiring venue which produced uninspiring races as sparsely populated grandstands – and yacht basin – testified. The final year aside, about the only overtaking seen on Sundays was by spectators rushing to escape the malaise.

Equally the inaugural Baku race – known as the European Grand Prix for political reasons – was deemed by the RaceFans community to be the worst of the 2016 season with a score of 4.7 out of 10. For the record, Valencia features twice among the bottom four races: its 2011 race scored 3.8 and the inaugural 2008 event was rated 3.9.

Now, here’s a thing: both layouts were designed by Tilke Engineers & Architects, the eponymous company headed by Hermann Tilke – the German circuit architect whose pencil has drawn curves for virtually every circuit to join the calendar since 1999 (Malaysia).

In addition, he has helped venues such as the ‘Newburgring’ – as the short version adapted from the original 14-mile monster circuit should by rights be known – and Hockenheim remodel their layouts in order to foster overtaking, plus designed test venues for Porsche. The 64-year-old architect is the go-to guy when it comes to circuit design.

Hermann, who raced at German national level in the eighties with some success, has come in for much flak over the years. The term “Tilkered” has found its way into F1-speak to describe any circuit fans takes exception to, sometimes even for venues Tilke has had no hand in. But seldom is he praised for delivering venues where overtaking is not only anticipated, but has become the norm.

We have known each other for many years and met in Baku ahead of qualifying for the race to discuss his methodology. Hermann is utterly relaxed; confident the track will deliver on Sunday, as it did last year.

Given this sudden enthusiasm for street circuits, what, I ask him, is the difference in cost between commissioning a street circuit and constructing a permanent circuit, both to full FIA Grade 1 (F1) license standards?

“You cannot say,” he says after a pause for thought. “Because a street circuit has two types of costs: One is the first time, where you have to buy the walls, the fences, pit building and everything, and maybe new asphalt and so on. And then the annual [erection] costs… you cannot [quantify] the difference. But of course [a street circuit] is more expensive.”

One of the downsides of street circuits is that they leave no motorsport legacy. Once the event is over, there is no patch of asphalt for club or national racing. Thus, the costs of annually building street tracks invariably exceeds the cost of constructing permanent circuits, which would in turn foster other types of motorsport in a region – a crucial factor in emerging motorsport markets.

“For sure it is like this,” he agrees before pointing out that “street circuits have other advantages: events coming to the people, coming to the city, the atmosphere is unique in a city… we [F1] have now three street circuits. We have Singapore, we have Monaco, and here [Baku].”

F1 also has, of course, semi-street circuits such as Melbourne’s Albert Park and Montreal’s Gilles Villeneuve Circuits, making it five temporary venues on this year’s calendar. If Miami does point the way forward for F1 and just 50 per cent of the number of mooted venues make it onto the calendar, F1 could be looking at half the world championship being contested on non-permanent tracks.

Given that Tilke would likely be granted the contracts, how does he go about designing such venues?

“In the beginning we look very carefully at the city and where it could happen,” he explains. “Mostly the promoter has rough ideas of where it could be. One of the starting points is where to position the paddock, because for a paddock you need space. The TV compound, the paddock, and all the infrastructure.

“That is not easy to find in a city. Here [in Baku] we were lucky because we have this big square.”

The track layout, of course, requires using existing roads. “You have to find streets that are wide enough, especially when it goes to high speed. If it’s very narrow, you make it slow. Then you have a look at what is possible, what is not possible, and here we had really positive discussions with the FIA, with Charlie Whiting, to make it possible.

What sort of time frame is required to stage a street circuit once all formalities are in place? If Miami has a street festival in October and Liberty gets the warm feelings it hopes for, could they run a race the following year?

“Usually it’s possible to do it in eight, nine months, maybe one year. If you have the route. And all the legal things are solved. For the first year it needs about nine months. You have to produce the pit buildings and all the technical [infrastructure] and so on. You need some time to order…”

So according to Hermann, a street race could conceivably happen in Miami in 2019.

We turn to the economics of building a circuit. How much, I ask bluntly. 500 million, 300 million in whatever currency?

“Yes, but it’s also possible to make it cheaper than 250, of course, why not? Everything is basic, but could be nice. By the way, the cheapest one was the Red Bull Ring.”

Because there was an existing facility before Tilke’s team moved in?

“No, there were nothing left from the existing track [in 1997, when it was called the A1 Ring]. It’s a short track, and everything’s done in a very effective way. And it’s very compact.” That upgrade cost around 60 million Euros in the current economics, and its 2011 renovation as the Red Bull Ring cost a similar amount.

In closing I pose questions I’ve stored for many years in anticipation of a sit-down: Can he counter perceptions that overtaking is impossible on ‘Tilkedromes’?

I note the weary look on Hermann’s face as he replies slowly: “First of all, it’s not true. Look to the Shanghai race this year, look to the Bahrain race this year. What happened? Overtaking. Also with these cars, [with] which it is really very difficult to overtake. Look to Austin” (for which he can take partial credit).

“The only thing we [as circuit architects] can influence is that a good race is possible. It’s not necessarily guaranteed, but it’s possible. We do not disturb a good race.”

Question two: Why these trademark wide run-off areas, which fans (and many F1 drivers) don’t like?

“You see here you can also do something very narrow [through the Old Town]. But it’s like this: When you make a permanent circuit, and we have this [phenomenon] only at permanent circuits; look at Singapore, look here, it’s another case.

“Not dead, but hurt. And at least for him the season is over. The same accident with a car at 60, nothing. We have Formula One cars, highly professional, we have motorcycles, also highly professional, but with other demands… and you see, you have on the same circuits, people say it’s wide, we have very interesting motorcycle races. Then you have the private people, and you have the other, track days, launches.

“Nobody wants to hurt themselves, to demolish their car. They feel better with long run-offs. Ask people who do car launches, Porsche racing days or whatever, they don’t go to circuits which are very narrow because it costs money. They go into the guard rail and hit the guard rail and it costs minimum €5,000.

Establishing the primary purpose of a circuit is “really, really important”, Tilke stresses. “What is the demand of the circuit? What does the owner want? I totally understand the motorcycle people, totally understand.”

So, the main thing when designing a circuit is to enable the money to make money, to make it sustainable. Without that no permanent F1 circuit could exist?

“Yes, they want to have [all categories].”

In closing I put to Hermann that after the sleepy Sunday that was the season opener in Melbourne, some Liberty folk suggested that the circuits themselves should be changed…

“Look, a circuit is a building. And a building is at least for 50 years. You can make some small changes, but you have it there and then it’s a reality. For 50 years.

“And you cannot change with every new generation of cars. The can make the regulations like this, that they can better overtake. Look at Formula Two. They can do it. Moto GP, they can do it. Also other series. Look to GT cars, GT3, very interesting, side-by-side, everything. They have downforce, but they can do it.”

36 comments on “Exclusive: Tilke answers his critics – and explains how to build an F1 track”