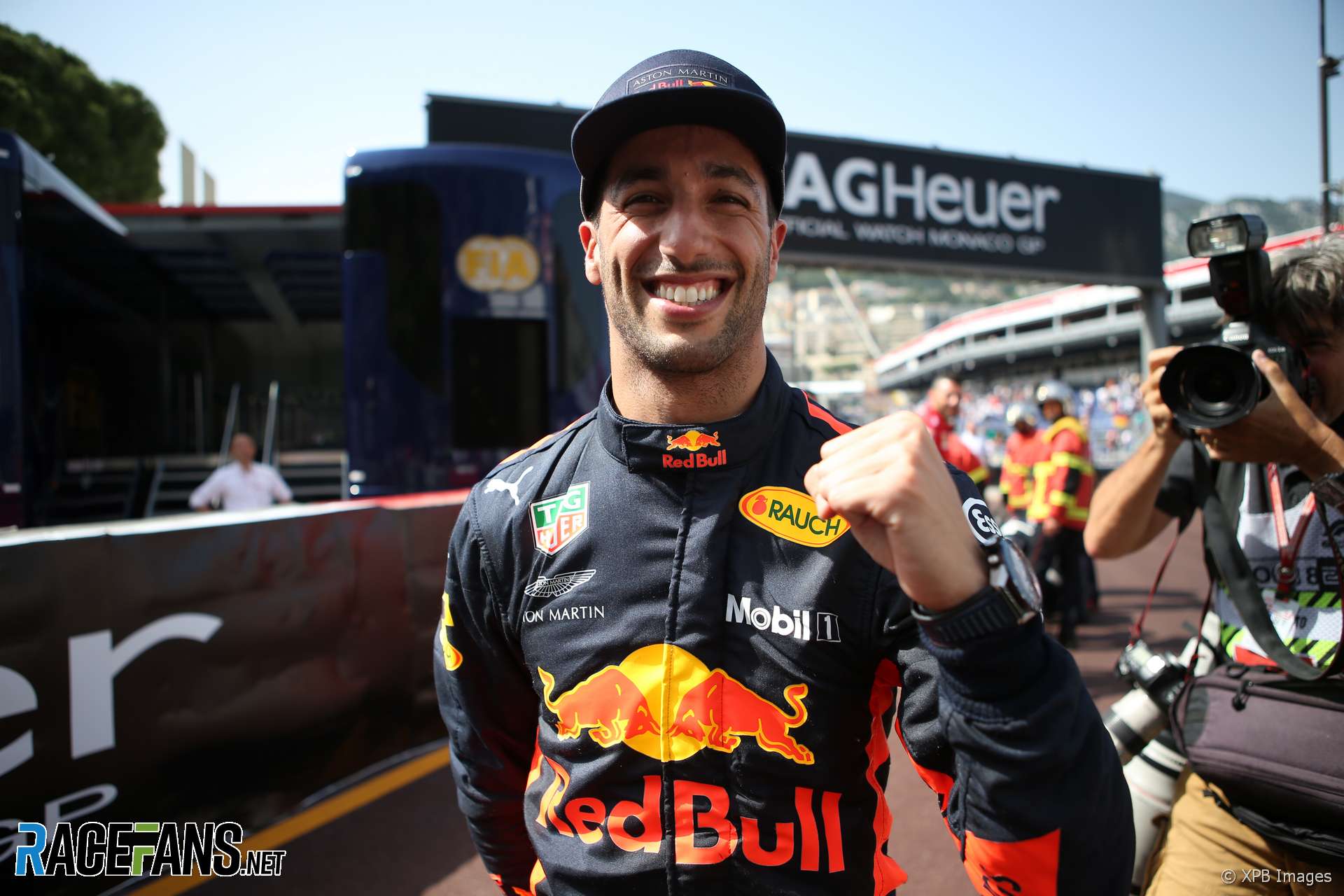 Daniel Ricciardo was in a class of one throughout practice for the Monaco Grand Prix. Having headed all three sessions before qualifying began, he completed a faultless job by heading Q1, Q2 and Q3 to take the second pole position of his career.

He was aided by team mate Max Verstappen crashing his car during the final practice session. Verstappen was unable to run in qualifying and is set to start last.

Sebastian Vettel pipped Lewis Hamilton to the second spot on the front row with his final run.

Shortly before qualifying began the FIA announced Red Bull had changed the gearbox on Max Verstappen’s car following his crash in final practice. This boded ill for the driver who had been quickest when he went into the wall five minutes before practice finished. Sure enough, the team weren’t able to finish the repairs to his RB14 in time, leaving him last on the grid with an impending five-place grid penalty.

The track improved rapidly throughout Q1 which meant the final minutes of the session were stressful for the drivers towards the front of the midfield. They were inadvertently helped by Charles Leclerc, who shortly after vaulting into the top 10 went off at Sainte Devote. That brought out the yellow flags and disabled DRS, preventing several drivers from improving in the final sector.

Among them was Brendon Hartley, who also complained about a close encounter with Sergio Perez’s Force India. The Toro Rosso driver narrowly missed the cut having been seventh-fastest in final practice.

Lance Stroll and Marcus Ericsson, both of which had looked slower than their team mates in practice, also missed the cut. Kevin Magnussen was the slowest driver to set a time, meaning the five drivers who dropped out in Q1 all came from different teams.

Could one of the top teams steal an advantage by getting through Q2 on a set of ultra-soft tyres? Red Bull’s pace advantage made them the likeliest suspect but their only remaining driver in the session, Daniel Ricciardo, stayed on hyper-softs from the word go.

Instead it was Mercedes who tried to gain a starting position on the harder, but strategically advantageous tyres. However it was clear from the early running that they didn’t have the pace and both drivers soon joined the rest on hyper-softs.

Ricciardo was comfortably quickest once again while a late improvement from Raikkonen made him the first of the two Ferrari drivers. The Force India pair led the midfield.

The session’s biggest surprise was Nico Hulkenberg’s failure to reach Q3. Carlos Sainz Jnr made the cut for Renault and Pierre Gasly took his Toro Rosso into the final 10, having left him team mate behind in Q1.

The identity of the pole sitter never really looked in doubt. Ricciardo’s first lap was a masterpiece of controlled aggression which delivered the first ever sub-71 second lap of Monaco. Nonetheless he went out to try and best it, and fell short by just three hundredths of a second.

It didn’t matter as no one else was able to break the 1’11 barrier. Hamilton produced a superb first lap to lead the Ferraris, and look on course to hold the position until the final sector of his final lap. There the Ferrari’s superior tyre life seemed to tell and Vettel reasserted himself to take second.

Nonetheless Hamilton beat the other Ferrari of Raikkonen. Valtteri Bottas was third ahead of an impressive Esteban Ocon. The Force India driver led the midfielders, all of which only had one run on new tyres in Q3.