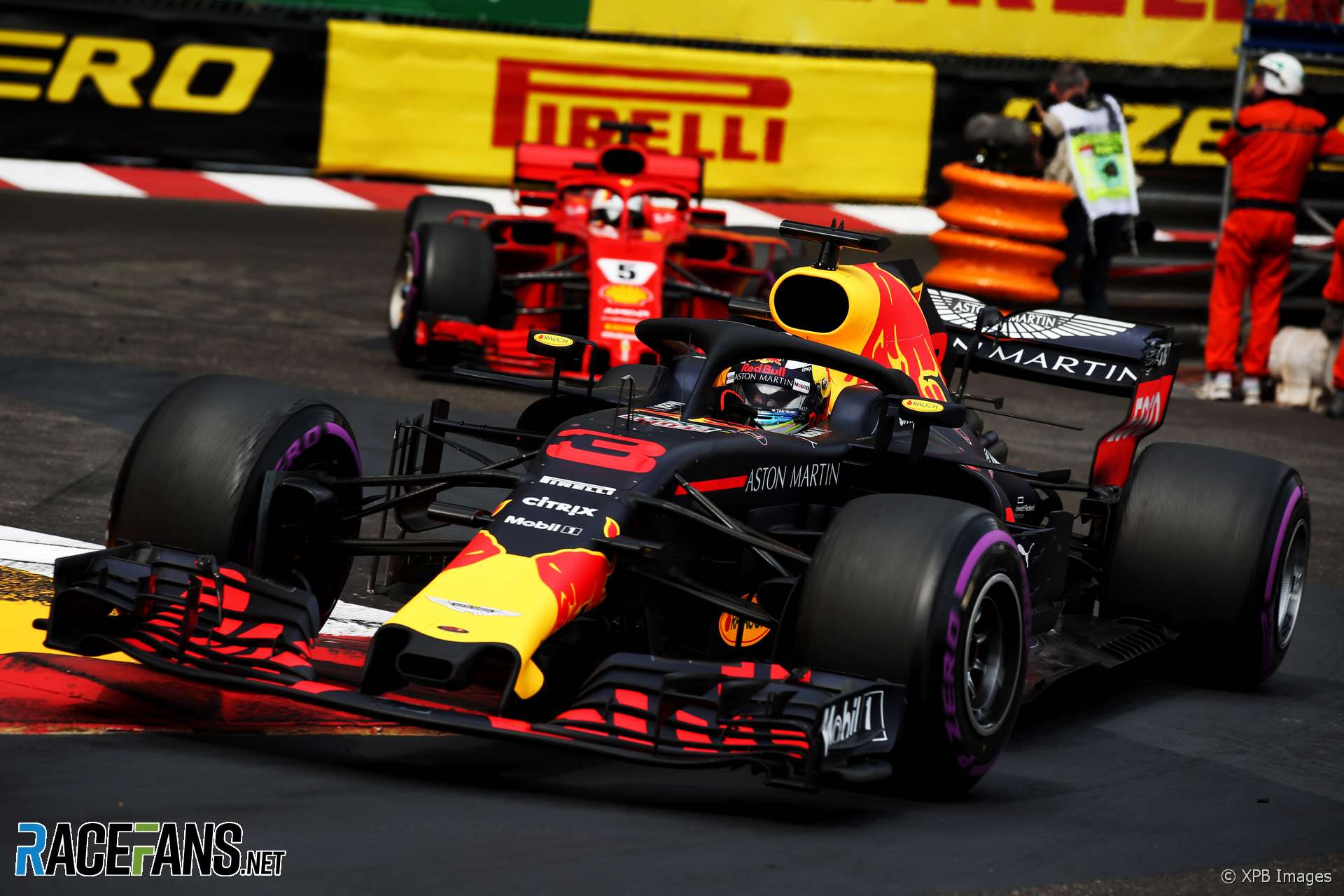 Daniel Ricciardo dominated the Monaco Grand Prix, taking victory from pole position ahead of Sebastian Vettel despite losing his MGU-K early in the race.

Ricciardo reported a loss of power early in the race, later confirmed by Christian Horner to be a loss of his MGU-K, but held off Sebastian Vettel to take his first win around the Monte Carlo streets and his second win of the season.

Lewis Hamilton took third for Mercedes, ahead of Kimi Raikkonen and Valtteri Bottas.

Despite a brief pre-race shower, conditions were dry as the grid lined up for the start of the Monaco Grand Prix.

A clean start to the race saw Ricciardo lead from pole ahead of Sebastian Vettel, Lewis Hamilton and Kimi Raikkonen behind.

Brendon Hartley reported first lap contact with Charles Leclerc and damage to his front wing, but was able to proceed without pitting his Toro Rosso.

Williams’s troubles were compounded when Lance Stroll suffered a left front puncture on the second Williams, forcing him to pit early.

Lewis Hamilton was the first of the front runners to pit, switching to ultra-soft tyres on Lap 12 and resuming in sixth place, behind Esteban Ocon’s Force India.

Sebastian Vettel pitted from second place on Lap 16, able to resume without losing position. Red Bull immediately responded, pitting Ricciardo on the very next lap and retaining the lead of the race.

With Ricciardo seemingly comfortable out front, there was drama for the Australian when he suddenly reported a loss of power in his Red Bull on Lap 28, allowing Vettel to close the gap significantly to the leader.

Despite the issue, Ricciardo was able to maintain his advantage and dictate the pace out front. The question became whether the ultra-soft compound tyres of the front runners would last until the end of the race.

Fernando Alonso became the first retirement on Lap 53, pulling off at St Devote complaining of a gearbox problem on his McLaren.

There was late race drama when Charles Leclerc suffered an apparent braking issue into the harbour chicane and crashed into the back of Brendon Hartley’s Toro Rosso, bringing out the Virtual Safety Car.

When the race resumed, Vettel appeared unable to bring his tyres back into life and lost significant ground to the leading Red Bull. Ricciardo comfortably held on to take his first Monaco Grand Prix victory to the delight of the Red Bull team.

Nico Hulkenberg finished eighth for Renault, ahead of Max Verstappen from the back of the grid and Carlos Sainz rounding out the top ten.