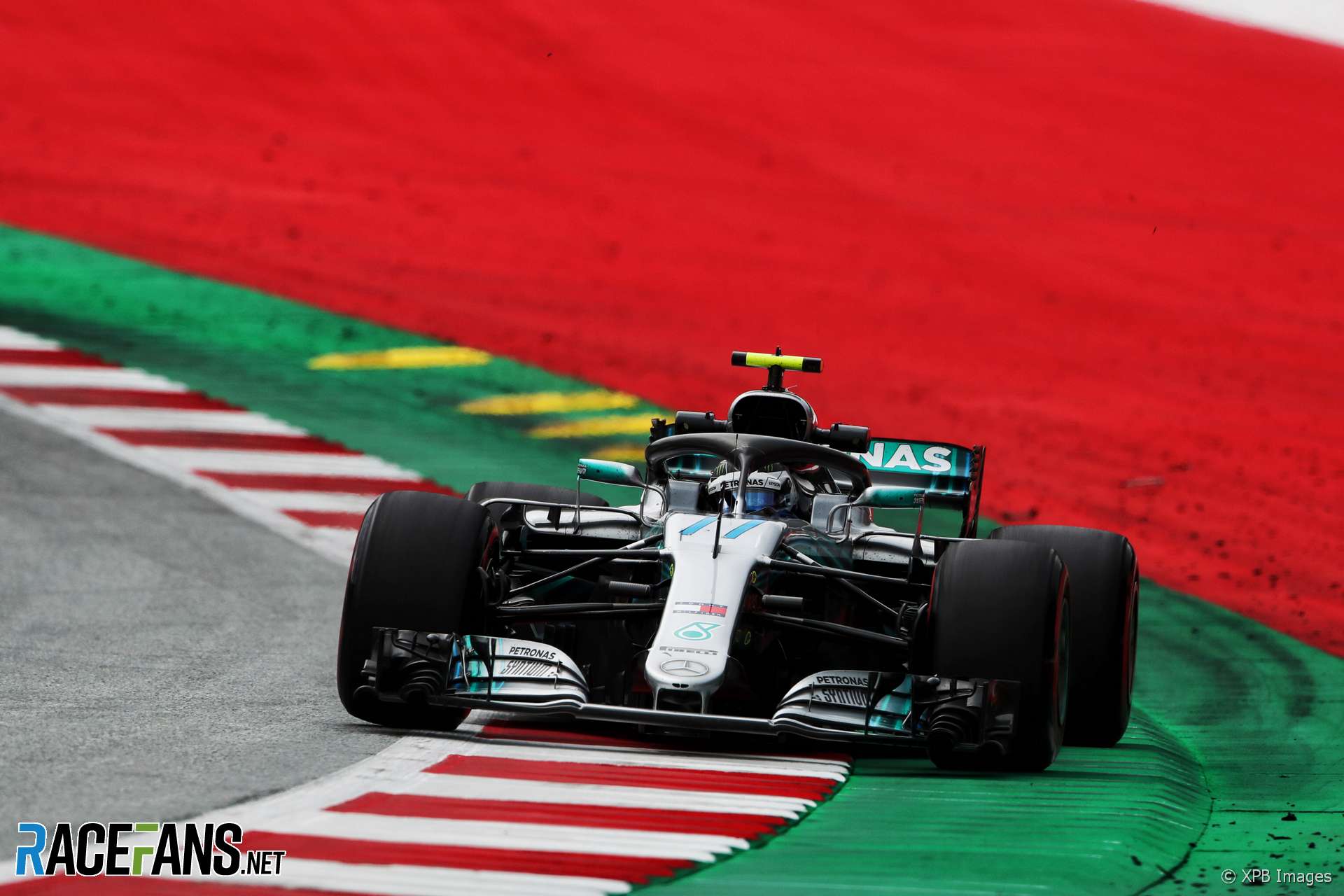 When Toto Wolff heard, during his evening media briefing at the Red Bull Ring, that Ferrari’s Sebastian Vettel had been given a three-place grid penalty, the Mercedes team principal remarked that he’d prefer to “beat them on-track”.

However there must be relief at Mercedes that, for the second race weekend in a row, they only have one Ferrari immediately behind them on the grid with a softer set of tyres, when there should be two. In Paul Ricard they were let off the hook by Kimi Raikkonen’s sub-par qualifying effort; here’s Ricardo Adami’s failure to notify Vettel that Carlos Sainz Jnr was bearing down on him at turn one has done it.

Valtteri Bottas and Lewis Hamilton, therefore, will only have to worry about containing Raikkonen’s third-placed ultra-soft-shod car at first. But Wolff isn’t taking for granted how easy this will be.

“Kimi is still there. What we have seen is the Ferrari is particularly strong on traction out of turn three. So the problem is not solved. There is a Ferrari that performs well. [But] obviously the situation is more comfortable like this.”

The pole sitter has kept the lead on lap one in every race this year. The last time a driver lost the lead from pole at the start was in Brazil last year, when Bottas was passed by Sebastian Vettel.

However Bottas – whose start in this race last year was so quick Vettel was convinced it was illegal – is not too concerned about being challenged into turn one.

“It’s a relatively short run into turn one so I think you need a normal start,” he said. “Of course, you always try to get a good one – but I think to actually lose a position here or to gain, there needs to be quite a big difference with the starts.”

Lewis Hamilton, though, will be well aware that starting second gives him a chance of taking the lead. That’s how Nico Rosberg beat him to victory at this track three years ago. Hamilton vowed he won’t treat his team mate different to any other rival at the start. “There’s no difference,” he said. “Still racing.”

Fortunately for Bottas, the team’s hierarchy won’t treat him any differently either. Hamilton may be 53 points ahead of his team mate, thanks largely to the misfortunes Bottas has suffered, but Wolff made it clear Bottas won’t have to play the designated number two role any time soon.

“We’ve discussed that internally already. We are at race nine, there’s a long way to go, and I think we owe it to the fans. It is also the racing mindset we have that we won’t be playing for a driver championship in June [or] July.

“Obviously towards the end of the season if you go in the last championship and you can see that this is a solid advantage for one of the drivers, this is the unfortunate situation within every race team that you need to look at. But not now.”

The threat to Mercedes from Ferrari has been stronger this year than in previous seasons. Even so, the W09’s latest aerodynamic upgrade, allied to the power unit boost which arrived at the last race, has given it a clear edge. As Vettel noted, the Mercedes has the legs on them in the final sector (see below) at the Red Bull Ring – which also bodes well for the silver cars at Silverstone.

“I think the last two corners are not too bad but I think it’s the very high-speed seven and turn nine, so the first one, the second last corner. It’s close. We’re not talking about much but obviously enough to get ahead.”

Ferrari’s strength remains on the straights, as Hamilton was reminded when he was trading fastest sector times with Vettel in practice. At the start it will be down to Raikkonen to see if he can make good use of it.

As Pirelli admitted on Friday, the race is likely to be a straightforward one-stop affair, even for the teams starting on the softer compounds. The ultra-soft tyre is prone to graining and drivers are likely to opt for the harder compounds, which last longer and give away little in terms of performance.

The main area of interest strategically will be around how early or late drivers dare to pit. For the front runners this will depend on how quickly gaps open up behind them, which in turn could rest on how long the Haas and Renault drivers can make their worn ultra-softs last.

Vettel’s demotion to sixth place could give Ferrari the classic strategic headache of what to do when their two drivers intersect in terms of strategy. Mercedes may have publicly declared they’ll let their two drivers fight it out, but this seldom seems to be the policy at Maranello.