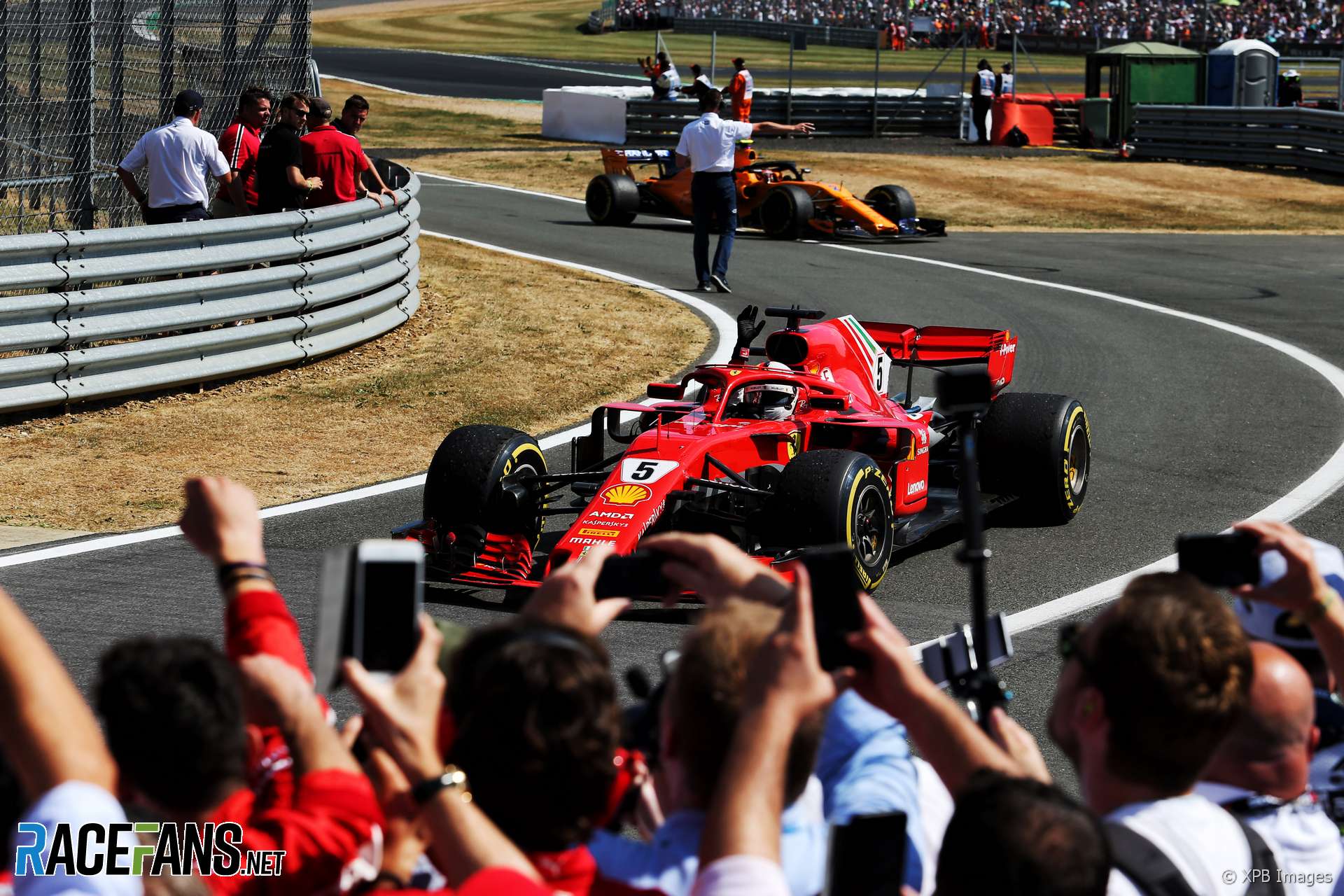 Sebastian Vettel took victory in the British Grand Prix ahead of Lewis Hamilton after a thrilling late battle between Vettel and Valtteri Bottas.

The Ferrari driver made a decisive move for the lead late in the race to pass Valtteri Bottas, with Lewis Hamilton taking second despite an opening lap clash with Kimi Raikkonen saw him drop to the rear.

Raikkonen took the final podium position, with Bottas and Ricciardo behind.

A dramatic start saw Vettel get a jump on Hamilton, sweeping through into the lead into Abbey as Valtteri Bottas also passed his team mate. Kimi Raikkonen fought to take third from Hamilton under braking for Village, but the Ferrari locked up and collided with the Mercedes.

The resulting spin dropped Hamilton to the rear of the field with the Mercedes driver reporting damage to the right rear of his W09. Raikkonen was awarded a 10 second time penalty for the collision.

Vettel led the early phase from Bottas, with Max Verstappen in third, Raikkonen and Daniel Ricciardo. By lap 11, Hamilton had already worked his way back up to sixth place.

After the first round of stops had concluded, Vettel resumed the lead from Bottas, with the two Red Bulls now ahead of Raikkonen, who briefly went off track at Abbey after a moment of oversteer.

Red Bull pitted Ricciardo for a second time, but strategy was turned its head when Marcus Ericsson spun into the barriers at Abbey, bringing out the Safety Car.

Vettel pitted from the lead along with team mate Raikkonen for fresh soft tyres, promoting Bottas into the lead of the grand prix. As the race restarted with 15 laps remaining, Bottas led from Vettel, Hamilton, Verstappen, Raikkonen and Ricciardo in sixth.

Raikkonen passed Verstappen into Brooklands, but Verstappen was able to re-pass the Ferrari around the outside of Luffield and hold on to fourth.

The Safety Car was then deployed for a second time after a high-speed collision between Romain Grosjean and Carlos Sainz at Copse. Both drivers were able to climb out of their cars apparently unharmed.

The race resumed once more with 11 laps remaining, with Bottas again leading from Vettel with Hamilton ahead of Raikkonen, who quickly passed Verstappen for fourth.

Vettel began to put Bottas under severe pressure for the lead, trying to pass the Mercedes around the outside of Luffield, but Bottas was able to successfully defend.

With six laps remaining, Vettel saw another opportunity and dived down the inside of Bottas into Brooklands, taking the lead in decisive fashion. Hamilton quickly followed through by passing his team mate, with Bottas then losing another place to Raikkonen.

Vettel was untroubled over the remaining laps and took his fourth victory of the 2018 season. Hamilton crossed the line two seconds behind with Raikkonen in third.

Bottas took fourth ahead of Ricciardo in fifth, with Verstappen retiring late in the race. Nico Hulkenberg, Esteban Ocon, Fernando Alonso, Kevin Magnussen and Pierre Gasly rounded out the points.