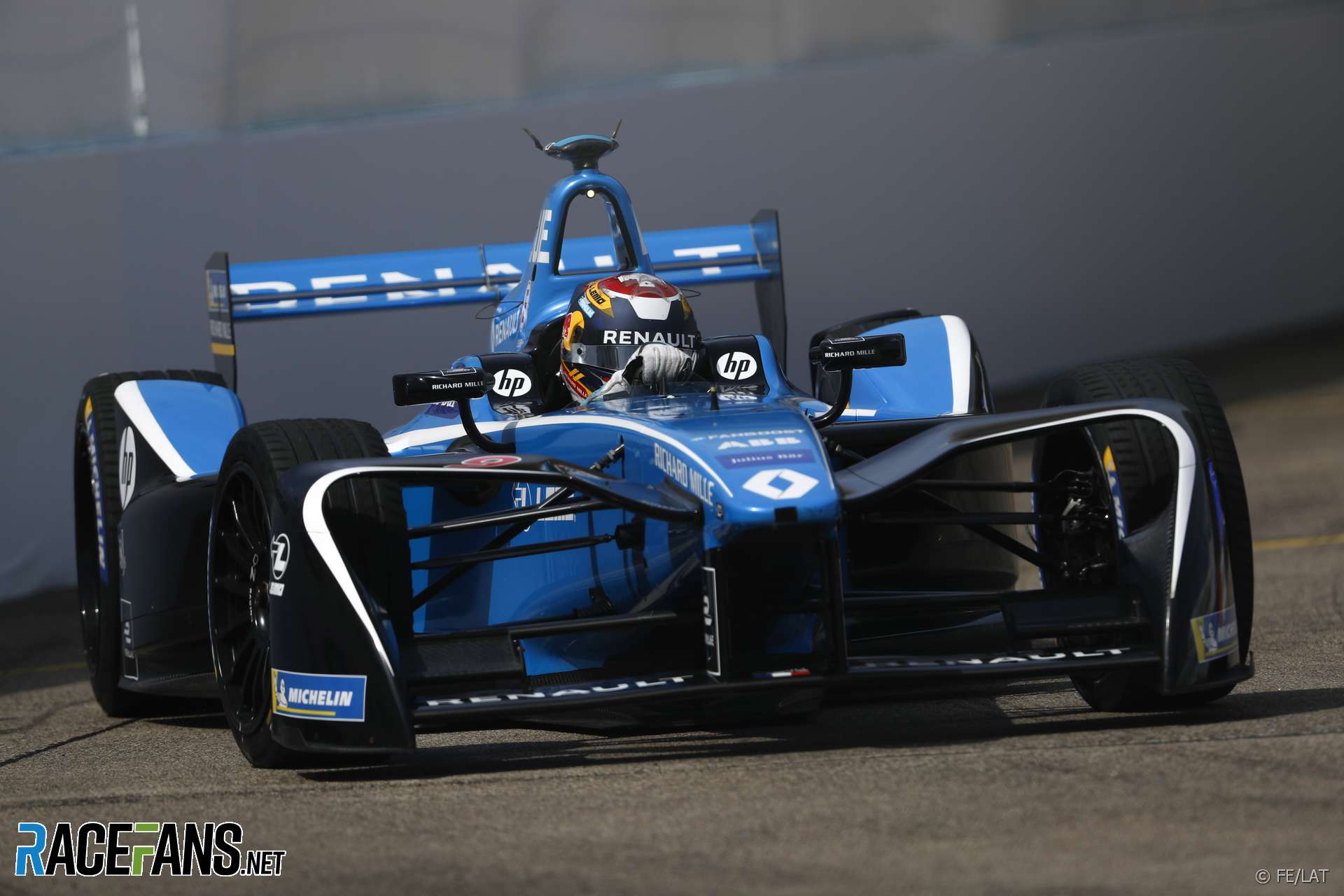 Sebastien Buemi took pole position for the first part of this weekend’s Formula E title-deciding double-header. But championship contenders Jean-Eric Vergne and Sam Bird will line up near the rear of the field after hitting trouble ion qualifying.

Once again, the championship leaders were in the first qualifying group; on a track as dirty as the Brooklyn circuit, which is wreathed in a haze of dust today despite cleaning, it’s very possible that being first out could be the nightmare it traditionally has been in Formula E.

Vergne and Buemi nearly collided on their out laps, chasing each other through corners as Vergne seemed to try an overtake on the Renault driver. All the drivers were trying to cross the timing beam last, backed up into each other in a train of five that left little room for personal improvement, as close as if they were racing.

Squashed behind Buemi it almost seemed Vergne might not cross the line fast enough to do a hot lap, however, he pulled out the fastest time of the group setting a potential Super Pole contention time of 1’13.890, while Sam Bird could only manage a 1’14.484, the potential 3 points for pole, essential to his championship bid, looking out of reach.

Oliver Turvey was unfortunately excluded from qualifying – following a crash into the barriers in the second free practice session he was taken to first the on-site medical centre, then hospital with a suspected wrist fracture and ruled out of racing for the duration of the weekend. Although NIO cannot replace him for the Saturday race, another driver can substitute for him tomorrow – presumed to be Ma Qing Hua, the NIO development driver who is with the team this weekend.

In a frantic further twist, it was also announced that Jean-Eric Vergne was under investigation for maximum power overuse – although unclear whether on his hot (200kW) lap or warm up (180kW) run.

As expected, the track seemed to be developing with all the drivers in this group beating both Felix Rosenqvist and Sam Bird, whose title hopes looked to be ebbing away. Lotterer, Abt and Evans all set convincingly Super Pole possible times, although none could go faster than Jean-Eric Vergne, assuming he was allowed to keep his time.

As has been the case with the championship order group qualifying, Group 3 seemed to tip the track temperature into unfavourable conditions. Engel and Heidfeld made the top ten of qualifying but Lynn and Da Costa struggled to keep up, albeit Lynn’s time pushed teammate Bird down another place into P13.

Meanwhile Jerome D’Ambrosio produced the group’s best time, bringing the Dragon car into Super Pole potential with a 1’14.121 and P5.

The final group made relatively decent gains, with the exception of Stephane Sarrazin who ruined his lap with a crash into the barriers similar to one he had during free practice, the circuit off the line treacherously dusty.

However, the real shock of the session came as both Jean-Eric Vergne and then Andre Lotterer were disqualified from the session, putting them to the back of the grid and unable to start higher than 19th (allowing for Turvey’s absence) – small comfort that Sam Bird’s time held him in 14th.

The disqualifications brought about a strange twist, promoting two other drivers to Super Pole and thus bringing Nico Prost into the shootout for the first time this season, just a few weekends after it was announced he was parting ways with e.Dams.

Prost’s achievement, however, was not to convert to more than fourth place on the grid, with a slow time at nearly 1’15 the best he could muster on the changing surface. Sebastien Buemi beat him comfortably with a 1’13.911 and looked set to take pole, but for Evans and Abt ahead of him.

D’Ambrosio only managed a 1’15.391, making him look certain for fifth place as Evans hit 1’14.465. However, Daniel Abt made an error on his lap and destroyed his own chances with a slide – promoting D’Ambrosio to fourth and leaving Buemi, a formidable qualifier last season, with only his second pole of the season.