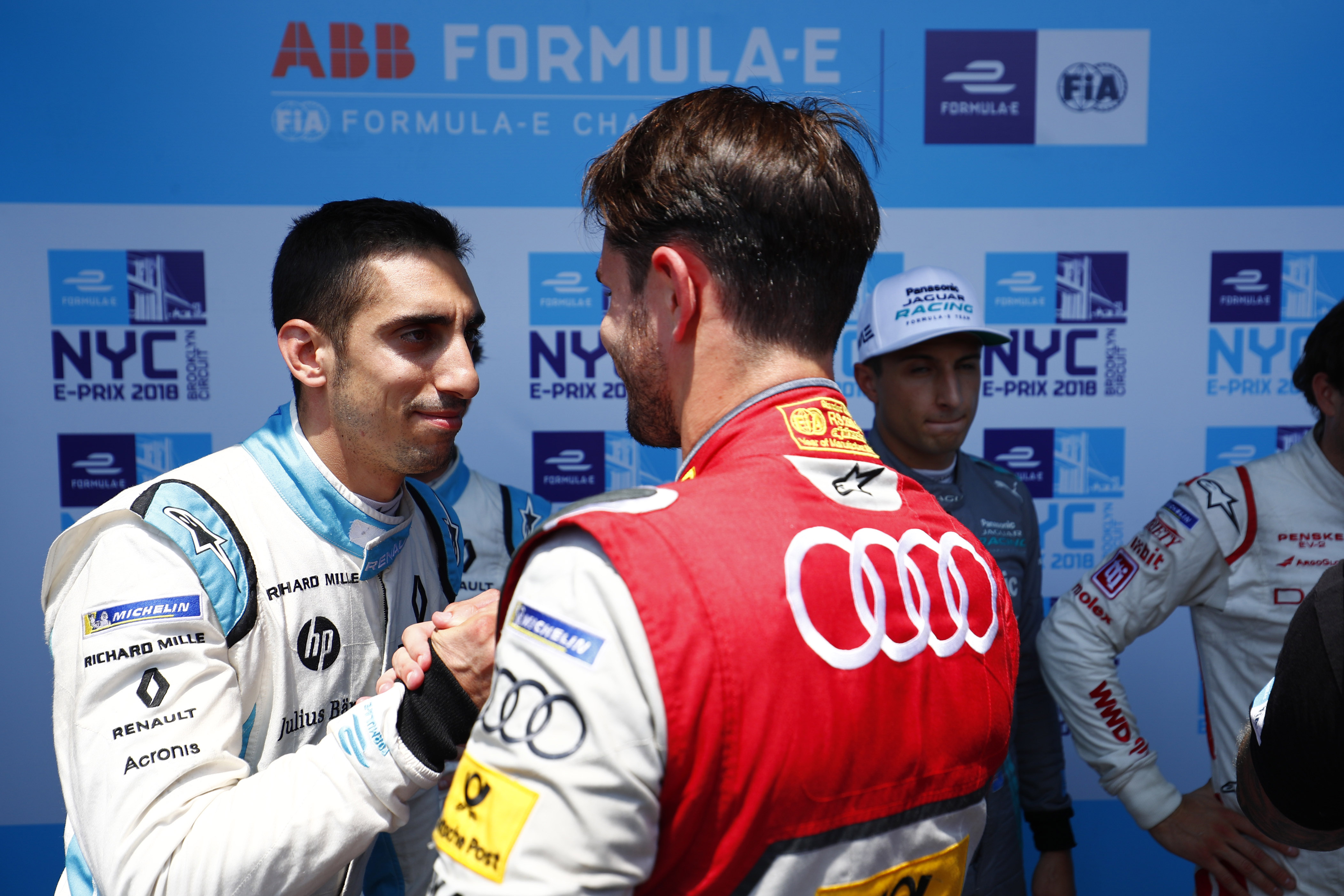 Sebastien Buemi has taken a second pole position in the Formula E season finale weekend, against the backdrop of stormy weather that briefly suspended the event with an extreme warning today.

It might seem an unusual problem for Formula E to be at risk by ‘too much electricity’ but a gigantic thunderstorm heading for New York saw local authorities evacuate the site and the event suspended for around an hour earlier today. However, gates have reopened and the race will go ahead as planned.

Just prior to that, Sebastien Buemi took pole in a qualifying session where, as always, the track proved very changeable – except in this case it was due to large areas of standing water.

Formula E qualifying groupings are now determined by the number of points drivers have in the championship, then ordered by a lottery. Today, Group 1 was those at the back of the championship – three substitute drivers in Stephane Sarrazin, Tom Dillman (in for Edoardo Mortara due to a DTM clash) and Ma Qing Hua (in for Oliver Turvey due to an injury sustained in FP2 yesterday) as well as Luca Filippi and Nico Prost.

Prost had a successful qualifying yesterday, where Techeetah’s disqualification saw him make Super Pole for the first time this season but it wasn’t to be today, with the adverse conditions leaving all five first drivers well off the pace – last-minute Ma Qing Hua by more than six seconds but still within the 110% limit for his qualifying group.

Group 2 saw the championship leaders take to the track and all five of Jean-Eric Vergne (who took the title after yesterday’s race), Sam Bird, Lucas di Grassi, Sebastien Buemi and Daniel Abt immediately moved into provisional Super Pole positions, about a second up on the previous group’s times.

Spitting rain began during Group 3, following a pattern where the latter groups have been as unfavourable as the first out and only Andre Lotterer was able to reach the top five, key to Techeetah maintaining a lead in the teams championship that Audi yesterday cut to a mere 5 points.

Antonio Felix da Costa was unable to go out in the group, following a gearbox failure on his car that would lead to him facing the same 10-place penalty for unscheduled replacement that Alex Lynn does after a crash in yesterday’s race damaged his.

Lucas di Grassi had been the fastest during group qualifying but made an error early on, pushing his car too hard and sliding into the barriers. He was able to drive on but finished taking P5, no 200kW time set for the session.

Sebastien Buemi starts the race from pole, with Andre Lotterer alongside him and his Techeetah teammate Jean-Eric Vergne behind.