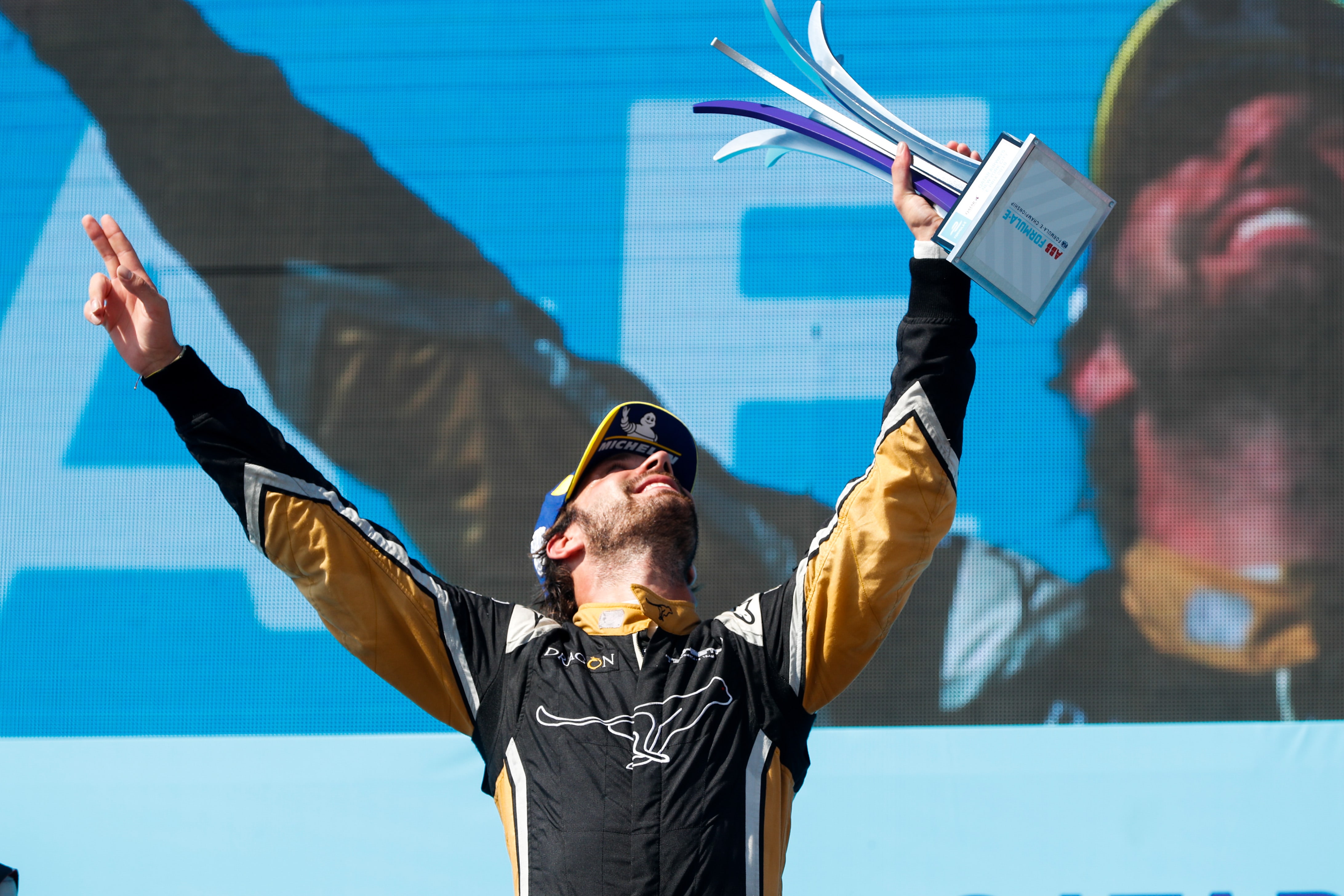 Jean-Eric Vergne has claimed the final win in Formula E’s first generation seasons, while Audi have finally taken the teams’ title, after a scrappy start to the year.

This weekend in New York was the last time that Formula E’s first generation of cars would race – the final outing for a battery design that has seen the output power and regenerative limits it could be forced to increase year-on-year and the final race distance increase by more than 50% from Season 1’s end. For a series mocked by many at its inception, Formula E has – over its four, progressively bigger seasons – if not silenced that doubt then made it seem as shrill as a power train’s acceleration over the noise being made about the championship’s growing success.

The three drivers on the final podium here, Jean-Eric Vergne, Lucas di Grassi and Daniel Abt, have all been in Formula E since that first, small-seeming season and perhaps it’s appropriate it ends with them. Di Grassi frustrated by being denied a final victory in the year his title defense – so certain-seeming in Valencia testing – faltered and finally mathematically died in Zurich.

And Daniel Abt, who many people assumed only had a seat in the season for his family’s name being on the now-Audi team, carried the factory effort’s points during an initially error-strewn campaign. While Jean-Eric Vergne – who said himself on Friday came into this series angry and lost after Formula One – has gone from his first victory at last year’s final race to being the only champion in Formula E ever to seal the title before the last race.

This has been a strange weekend, all the stranger as tempestuous weather threatened not just Formula E’s first wet race but its first suspended event altogether, local authorities evacuating spectator areas under weather safety concerns between qualifying and the start of the race. Fortunately, the storm over New York changed direction and the event re-opened without more serious drama.

It’s a good metaphor for the end of the first phase for a championship many people can’t believe exists and potentially more, especially amongst traditional motorsports fans, think shouldn’t. And if Formula E has had anywhere it has ever been able to answer critics, it has certainly been on track.

Starts, under electrical torque, are dramatic – the instant ability to use full power means any driver can hit the first corner hard, often into someone else’s car. Although for once any direct contact was mostly avoided, both Techeetah drivers (starting second and third) managed to get a spectacular drop on pole man Sebastien Buemi and pass him before turn two, forcing him back into the reach of the waiting Audis.

Spectacular start it truly was – and remains slightly controversial as first Andre Lotterer, then Vergne came under investigation for jumping the lights. Lotterer was issued a ten second stop-go penalty that took him out of contention but lead driver Vergne managed to avoid being penalised, something Di Grassi made no bones about thinking was incorrect in the post-race press conference.

Nevertheless, with Lotterer out of contention Techeetah’s 5-point advantage in the team battle was looking extremely frail, as Abt and Di Grassi moved up the ranks with even Buemi, dominant across the first three seasons of Formula E, unable to stop the sheer speed of the Audi cars.

Meanwhile the midfield was where Sam Bird, who until yesterday was the only man who could contend Vergne’s title lead, lost second-place in the championship. DS Virgin’s season has been difficult – with staff changes including the departure of team boss Alex Tai and a 13kg overweight car that chugged power inefficiently relative to its front-running peers.

Bird had entered the weekend annoyed at the 0.3km extension to the New York circuit he’d taken both wins at last year, saying the distance set the advantage against them and if anyone thought he was damage-limiting or attempting to overstate the struggle, the track seemed to shake out the truth of the situation. Bird has fought to the front of circuits where sheer power is less of an issue but it was clear to see he was falling crucial percentages behind the more efficient cars yesterday and that the DS car simply couldn’t convert 200kW output into speed in qualifying the same way others could.

Bird needed to finish within 15 points of Di Grassi to keep second in the championship and with the Audi driver up to second, even as he fought to keep hold of ninth place it looked impossible to move forward. Both Nick Heidfeld, who has had a relatively strong weekend for Mahindra after a huge hiccup for the Indian team in Europe and Nelson Piquet Jr’s Jaguar seeming to pull away impossibly.

But with Vergne holding Di Grassi from taking the lead, it remained in reach right until the final laps. The last blow for the chances came when Lotterer, steaming back up the order after his penalty, passed Bird and even mathematical chance discharged itself.

It wouldn’t be a Formula E race without some contact – and five cars never saw the finish line, even laps down. Filippi and D’Ambrosio were both taken out by some slightly bizarre – if dramatic – contact from Da Costa, who ploughed into the rear of Filippi, sending him into D’Ambrosio as the NIO driver slowed for a full course yellow prompted by the other Dragon driver, Lopez’s, front wing almost catching fire after a brush with the barriers.

Tom Dillman, in this weekend for DTM-detained Edoardo Mortara, put in a good result yesterday to take fourth place but was stopped early on with a transmission problem, his Venturi teammate Maro Engel suffering a loss of power in the second half of the race.

For the final Formula E race with car change pit stops, there were thankfully no pit lane incidents, although Di Grassi’s stop ended up scrappier than the Audi driver would have liked. At the end of the era and a season where the pit stops had become increasingly fraught and incident strewn, moved to a timed part of racing, a clean finish to the first generation was extremely welcome.

Formula E has a lot to be proud of from its first generation. Not least four different champions, four very differently-fought titles and technological advances that are staggering even within the context of a series being driven by the urgency of broader automotive change.

If Formula E’s greatest achievement has been survival then that’s no mean feat or a limited ambition. Creating any new series is difficult. Creating a new series that relies on technology only reluctantly being adopted and riding a wave of change arguably driven more by staggering fear than hope – environmentally and economically – is the sort of proposition that’s difficult to make entertaining. You can stare into oblivion on a vertical drop rollercoaster but it wouldn’t have the same appeal if you didn’t know there were mechanisms there to catch you.

This void squeaks back at you – while any racing series will always have its detractors, from Formula One fans who can’t stand WEC to Moto GP fans who think car racing is no kind of sport, Formula E is doing something. At the end of its first generation it’s not facing a tipping-point brink into desperate new measures, regulations tweaked to up its appeal or try to rescue an audience.

Formula E enters its second era with its head held high: a threshold-crossing rather than a panicked redirection. Some may not like the architecture but the street ahead’s been built now.