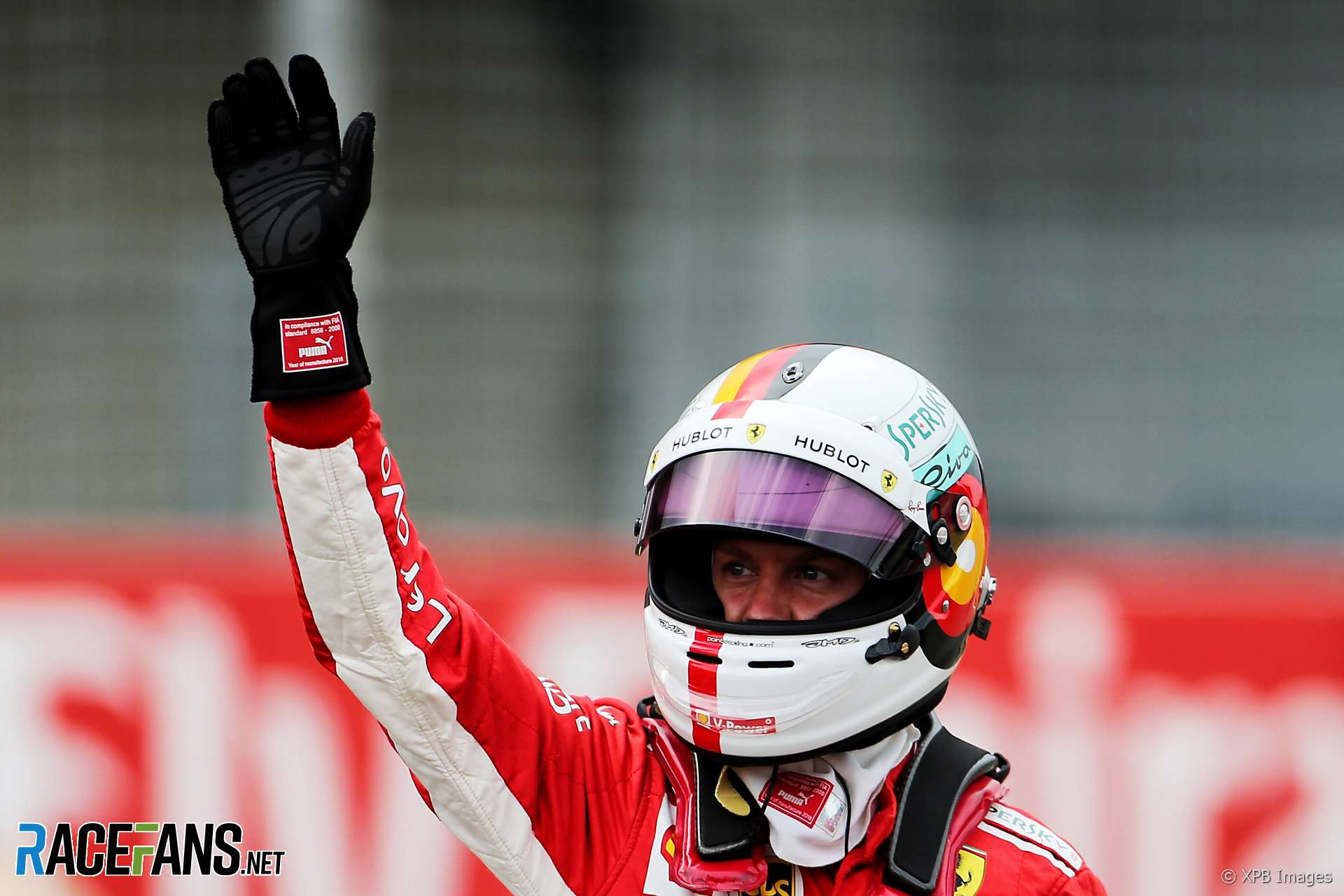 Sebastian Vettel has taken his home pole position at Hockenheim in a dominant display for Ferrari-powered cars, while Lewis Hamilton went out during Q1 with a damaged car.

Despite a wet FP3, the Hockenheimring had dried considerably by Q1 and lap times were immediately back down to where they were yesterday in FP2. Which was bad news for the Saubers and Williams that had benefited from the wet session – both Stroll and Sirotkin were immediately deep into the drop zone.

Others at risk included Perez, both Toro Rossos and both McLarens, with Alonso on the bubble for much of the session and Vandoorne struggling all the way through.

The shock of the session, however, was Lewis Hamilton struggling through two scrappy laps well back from his teammate or the Ferraris, skidding over kerbs at least twice. Whether an issue caused the offs or contact with the kerbs damaged his car, after the second excursion he said over the radio that he couldn’t change gear, seemingly stuck in fourth.

He would have made it through to further qualifying had he been able to get the car back to the pit lane but moments later he was seen getting out of it by Turn 10 and trying to push the car the remaining five turns back.

Mercedes confirmed in a radio message that the issue was hydraulic and that there was a risk of damage to the power unit, Hamilton stopping the car on their order. Technically his time put him into Q2, so Vandoorne, Stroll and both Toro Rossos were eliminated in the first qualifying, along with Esteban Ocon who was pushed into the drop zone by a fast lap from Sergey Sirotkin.

Daniel Ricciardo’s grid place penalties meant that he would start fifteenth at best this weekend, so opted not to run in Q2. With Hamilton also unable to set a time this session only three drivers were slated for elimination on-track.

Both Saubers had made it into Q2 again but Ericsson couldn’t match Leclerc’s pace, at least partly due to a lap halfway through the session when he span into gravel, littering it all over the track.

Clearing the circuit caused the session to be red-flagged, which caught multiple drivers midway through their hot lap and led to a substantial break in qualifying.

When the green flag was shown again, it was Alonso and Sirotkin who joined Ericsson in the drop zone – the two McLarens and Williams sandwiching the lower half of the grid.

The track had been improving throughout qualifying, with seven tenths being gained in Q1 alone and strongly rising track temperatures, increasing more than five degrees until Q3.

Ferrari-powered cars had looked strongest here throughout the earlier qualifying sessions, with all but Ericsson making Q3 and Raikkonen and Vettel having topped Q1 times.

With Hamilton and Ricciardo already out of the top ten, it initially looked like Bottas might be able to redeem Mercedes’ fortunes with a late-session fast lap of 1’11.416, over a tenth up on Raikkonen’s best time.

However, Vettel responded with a 1’11.212, comfortably taking pole for his home race.

Magnussen claimed best of the rest for Ferrari-powered Haas, a second back with a 1’12.200 and Ferrari junior Leclerc was able to beat one of only two Mercedes-powered cars in the top ten, pushing Sergio Perez down to last in Q3.