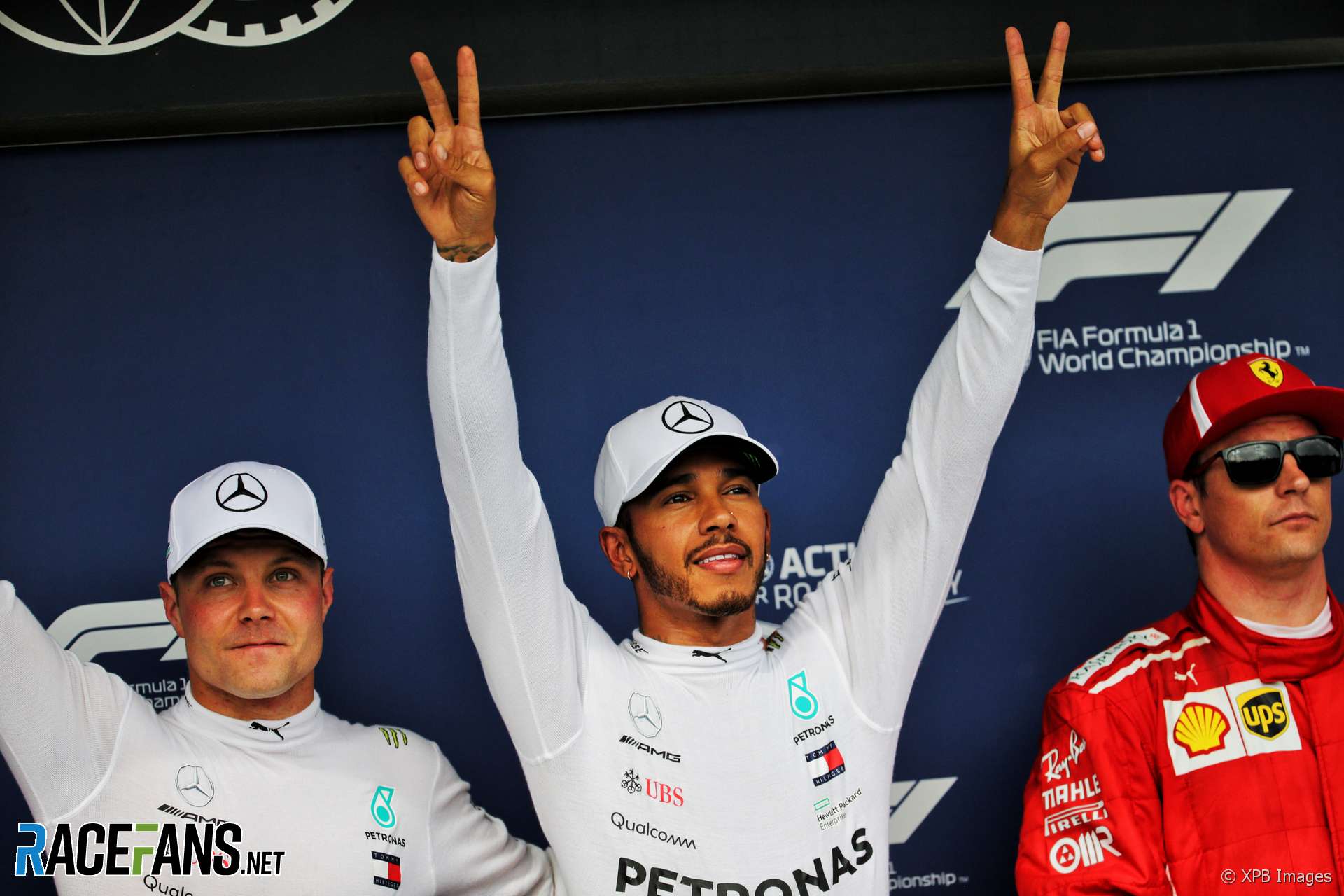 A rain-hit qualifying session at the Hungaroring gave Lewis Hamilton the chance to take his sixth pole position for the Hungarian Grand Prix.

Mercedes timed their drivers’ final laps to perfection, allowing them to take a one-two at a track where Ferrari had been quickest during practice.

The first part of qualifying began on a damp track but with more rain threatening the drivers wasted no time in getting onto the track. Intermediates tyres were the order of the day for all 20 runners at first, but as the track began to dry A handful of drivers risked laps on slicks.

Carlos Sainz Jnr was one of the first drivers in for a set of ultra-softs and immediately leapt to the top of the times by more than a second. That was the signal for everyone to pit for slicks.

One by one they came in, including Hamilton, who had repeatedly warned his team how quickly the track was drying. He quickly moved to the top of the times, but Vettel took longer to make the switch, and with the prospect of further rain about to fall it briefly seemed he might be in danger, but he escaped the drop zone.

Daniel Ricciardo cut it even finer. As well as being one of the last to put slick tyres on, he was the only driver in the field to opt for the harder soft tyres. It took until his final lap for him to move into safety.

That left the Force India pair out in Q1 along with Stoffel Vandoorne, Charles Leclerc and Sergey Sirotkin.

The track was dry enough for slicks when Q2 began, but the weather had other ideas. Ferrari were wise to that and sent Vettel – but not Raikkonen – out on intermediates.

Every other driver was on slicks, which looked like they correct choice until they arrived at the final sector, where it was tipping down. That meant 14 drivers peeled off into the pits for intermediates, while Vettel enjoyed the best conditions of the session to set a time no one could beat.

As the rain grew heavier, taking advantage of the first opportunity to set a time was crucial. Lance Stroll threw his shot away, spinning into a barrier, and by doing so caused another problem for Ricciardo.

The Red Bull driver had to back off for the yellow flags while Stroll rejoined the track. The next time around the track was even wetter, and he wasn’t able to break into the top 10.

As the track continued to get wetter, those who were safely through pitted and the remaining drivers pitted for full wet weather tyres. But while the final sector of the lap began to improve, increasing water levels elsewhere on the track kept them from improving.

As Q3 began the track was wet and light rain was decreasing. The remaining 10 drivers all selected wet weather tyres but also faced the crucial decision of when to fit for a second, fresher set.

Mercedes told Bottas the time was tight for them to be able to do three ‘push laps’ on their first set of tyres followed by two more on another set. Hamilton set the pace initially, but when the Mercedes pair came in for their second set of tyres Raikkonen stayed out a lap longer and took over provisional pole position.

Bottas was serviced by Mercedes first but the team held Hamilton in the pits for an extra few seconds before he left, giving the track more time to dry out. “You’ve been quicker than the field all afternoon,” Pete Bonnington told Hamilton as he prepared for his final lap.

Bottas was the first driver around and knocked Raikkonen off pole position by two-tenths of a second. But the flying Hamilton found even more, took another two-tenths out of Bottas, and clinched his fifth pole position of the year.

Vettel’s last effort left him a couple of hundredths shy of his team mate in fourth place. Carlos Sainz Jnr, who was consistently quick in the difficult conditions, claimed fifth ahead of Toro Rosso’s Pierre Gasly.