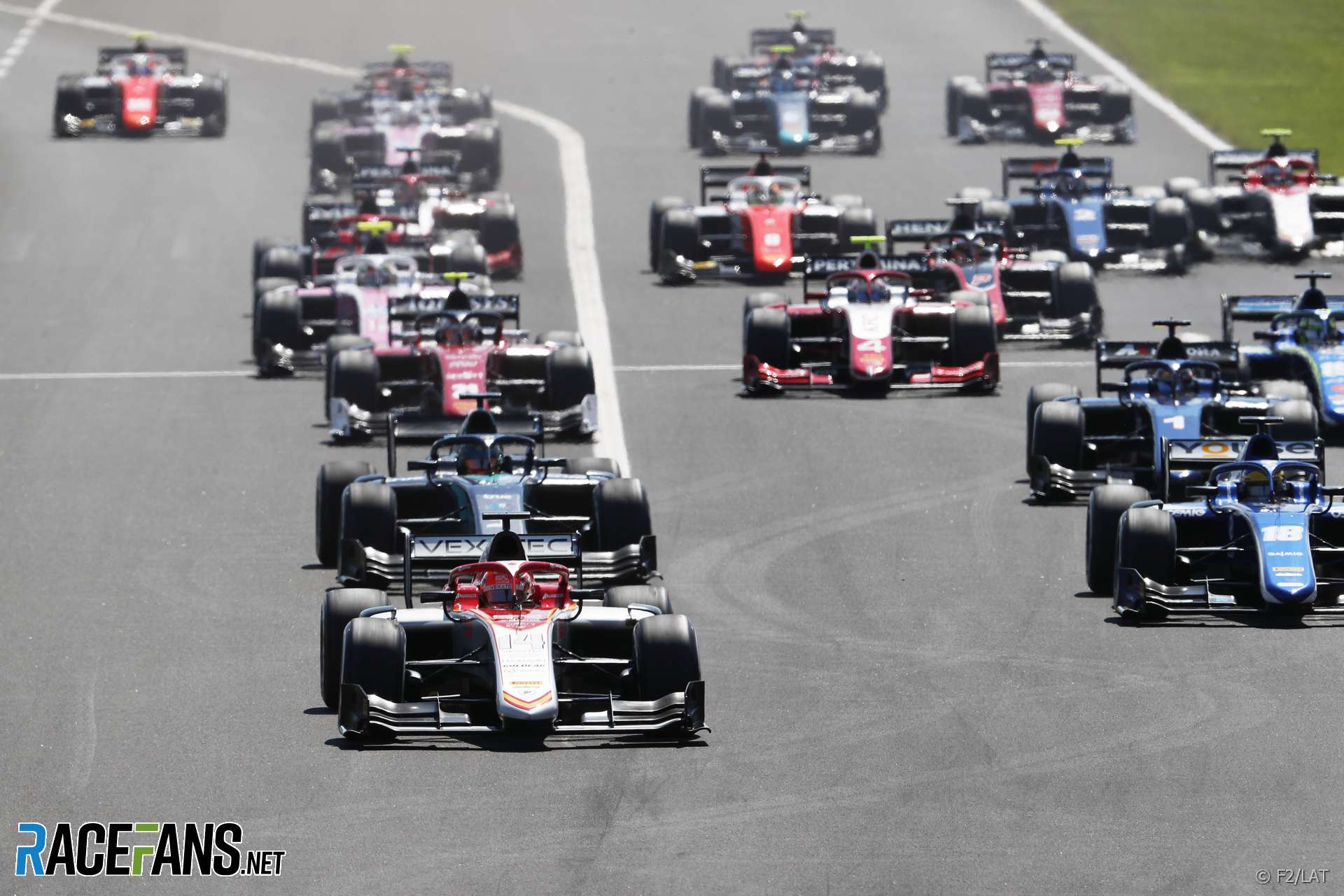 Fourth-place starting Alexander Albon has beaten Artem Markelov at his own game, holding his nerve – and tyres- to a sprint race win in Hungary.

The first weekend of F2’s new clutch, hoped to have fixed the stalling issues seen in the first third of the season, has seen a 100% success rate with all cars getting off the grid in both races – albeit with lower grip.

Reverse pole sitter Markelov slipped back to fourth from pole with a poor getaway under a lot of wheel spin, immediately giving the lead to Ghiotto.

Roy Nissany, Alessio Lorandi and Ralph Boschung went three-wide and colliding into turn one – both Boschung and Lorandi left the track and were ultimately out of the race, with Boschung’s stranded car causing a Virtual Safety Car.

The race was neutralised for less than two laps and the restart saw more incidents, with Sergio Sette Camara – who lost third place yesterday over a 10-second penalty for colliding with Antonio Fuoco – once again colliding with the Italian. Fuoco’s car went briefly airborne but escaped with nothing worse than a foxed front wing he drove back to the pits.

Sette Camara’s haste on the restart was to try to take the final podium position off Markelov. The fight was almost immediately joined by Lando Norris and feature race winner Nyck de Vries and by lap 11, five drivers were contesting third place as former Manor F1 driver Roberto Merhi brought his MP Motorsport car into the mix, having moved up from eleventh to eighth.

With such a tight battle behind them, Ghiotto and Albon were free to make decent headway from the pack – although Ghiotto seemed not to be able to make his own lead on the Thai driver. Degradation is known to be high in the dry here and with 28 laps on just one set of tyres for the sprint race, tyre management was to prove the deciding factor in several battles.

Most unusually, Markelov’s; known for being unusually good at managing tyres, he started to slip back through the order after being passed by Sette Camara, then an attempt by De Vries letting Norris pass them both.

De Vries and Norris had battled fiercely behind him and continued to but with Norris’ tyres in better shape and Merhi adding pressure from behind, yesterday’s race winner also ended up slipping backwards.

Ghiotto’s tyres began to severely give out, Albon taking advantage with a daring pass on lap 25 that saw him look certain to have secured the win.

George Russell had started the race dead last, following a mechanical failure during the feature race and frustrated to be so far from the points while rival Norris moved up the order – he described drivers around him as “out for a Sunday drive.”

Russell’s luck turned, however, as running with slower drivers meant he had saved tyres and by the last few laps was contending the points – against his own teammate Jack Aitken. The two ARTs followed each other for several laps, Russell desperate to pass Aitken and eventually making it on turn 13 of the penultimate lap – a massive recovery from twentieth to eighth.

Albon took the chequered flag, with Ghiotto hanging on to second and a frustrated Sette Camara constrained to third. Following behind them, Norris held off Merhi for fourth and Nirei Fukuzumi took a dramatic sixth place from De Vries with a drag-race finish.

With Russell rounding out the points for the sprint race, Louis Deletraz and Aitken were left with nothing for rounding out the top ten. Markelov finished in thirteenth, passed by all but three un-lapped cars.

On the podium, Albon confirmed tyre management was key to his win, biding his time until Ghiotto made an error, saying “Midway through the race I was thinking degradation was really bad – but the more laps we went on, I realised Luca was really struggling and the tyres were coming to me.”

George Russell still leads the F2 standings, with 171 points. Lando Norris has closed what was a 37-point lead to only 12 on 159 and Alexander Albon has cemented his third place on 141, keeping him easily in the title fight for the next four rounds.

F2 returns after the summer break in Spa-Francorchamps.