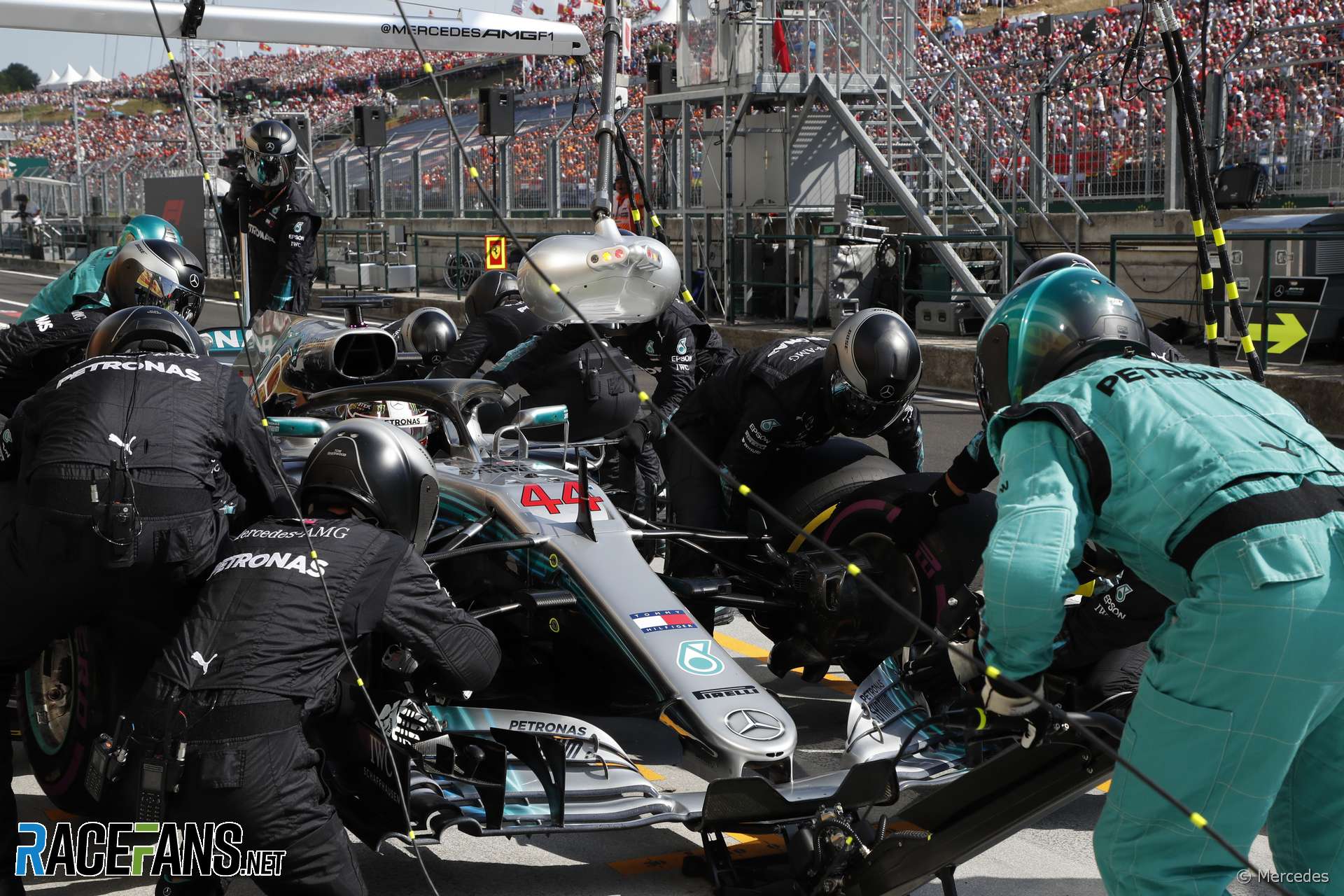 In the round-up: FIA race director Charlie Whiting says he isn’t concerned about pit crews occasionally appearing in the pits when their drivers do not make pit stops.

Article 28.12 of the Sporting Regulations states “team personnel are only allowed in the pit lane immediately before they are required to work on a car and must withdraw as soon as the work is complete.” However it is not uncommon to see team members appear in the pits without their driver makring a pit stop, potentially to dupe a rival into thinking they are about to pit.

Whiting, who as race director has the power to report incidents to the stewards, was asked about Mercedes doing so during the last race, and said he isn’t concerned about the practice:

It was clear they could have been stopping. Whether they had any intention to do it I don’t know.

The rule’s in place purely to stop people hanging around all the time if you remember they used to be out in the pit lane nearly all the time. I think it works pretty well. They all play little games occasionally.

If they’d been hanging around in that area for a couple of minute at the same time Ferrari were coming for example then we might have something to say about it. I think that’s all part of the show.

Although we should enjoy the start of our summer holidays this evening, none of us at Mercedes will pretend that we feel happy – our thoughts are rather with Niki, Birgit and the Lauda family. The world knows Niki as an F1 legend with incredible power and resilience. For all of us at Mercedes he is our chairman, our mentor and our friend. We have missed him by our side in Hockenheim and Hungary, and can’t wait to have him back with us on the Grand Prix tracks of this world. The recovery he now faces is not a race. But knowing Niki, I’m sure he will soon be telling every nurse and doctor that he has had enough of the hospital. We wish him a safe and speedy recovery – in that order – and send all our positive energy to him and his family. I miss you my friend – Toto . . . . . #nikilauda #lauda #totowolff #wolff #mercedes #mercedesbenz #mercedesamg #formula1 #f1 #lewishamilton #valtteribottas

That’s one hell of a coup for Renault! 👀

I think this photo with my son long long time ago and a certain @danielricciardo looks appropriate for today. Welcome to @RenaultSportF1 mate. pic.twitter.com/3veVj53hzM

I would love to see @alo_oficial at @redbullracing in 2019. But having watched the @amazon McLaren Doc last night, sadly I can’t imagine there is enough humble pie in all of Japan for #FA14 to reconcile with #Honda! #F1

Spring (summer?) cleaning my office during @F1 break, & find 3 dossiers of clippings re B Ecclestone $40m fraud case, ready for writing a column – then he settled it by way of $100m payment… pic.twitter.com/y1nSYxSZre

Seems like only yesterday when the innocent days of Karting saw me only reassure myself that I was at the apex when I had clouted the kerb!! #happydays #karting pic.twitter.com/smYZFvktmA

"I think he had a strong desire to leave and I think it was probably pretty close between us and Renault, but ultimately Daniel would be best to tell you how close."

"The final hour on Tuesday was quite tricky because it was the first time I'd driven an F1 car in the wet and it was quite a different experience to my F2 car."

Has Ricciardo made the right move?

What a signing for Renault but I have to say I am shocked. From a fan’s perspective, Red Bull-Honda is for sure his best to win a championship, he is pretty much guaranteed the best if not joint best chassis on the grid, the big unknown being Honda, but it’s agreed in the paddock now Honda and Renault power unit is on par.

So why choose Renault then? Better chassis? No. Better power unit? Probably not. Bigger potential/budget? Again no, Red Bull are Formula ‘A’, Renault ‘B’ and have a ton of work to do to join ‘A’. They are still not even consistently ‘best of the rest’.

Maybe being team mates with Verstappen has something to do with it? I think we will all agree for a driver to challenge for the championship he needs number one status, he will get that at Renault but will always be 50:50 at Red Bull. Red Bull will now have Verstappen as number one to enable him to challenge for the championship with support from Sainz/Gasly.

I really hope it works out for Ricciardo. Top, top driver and a great character, a very brave move.
Wobs