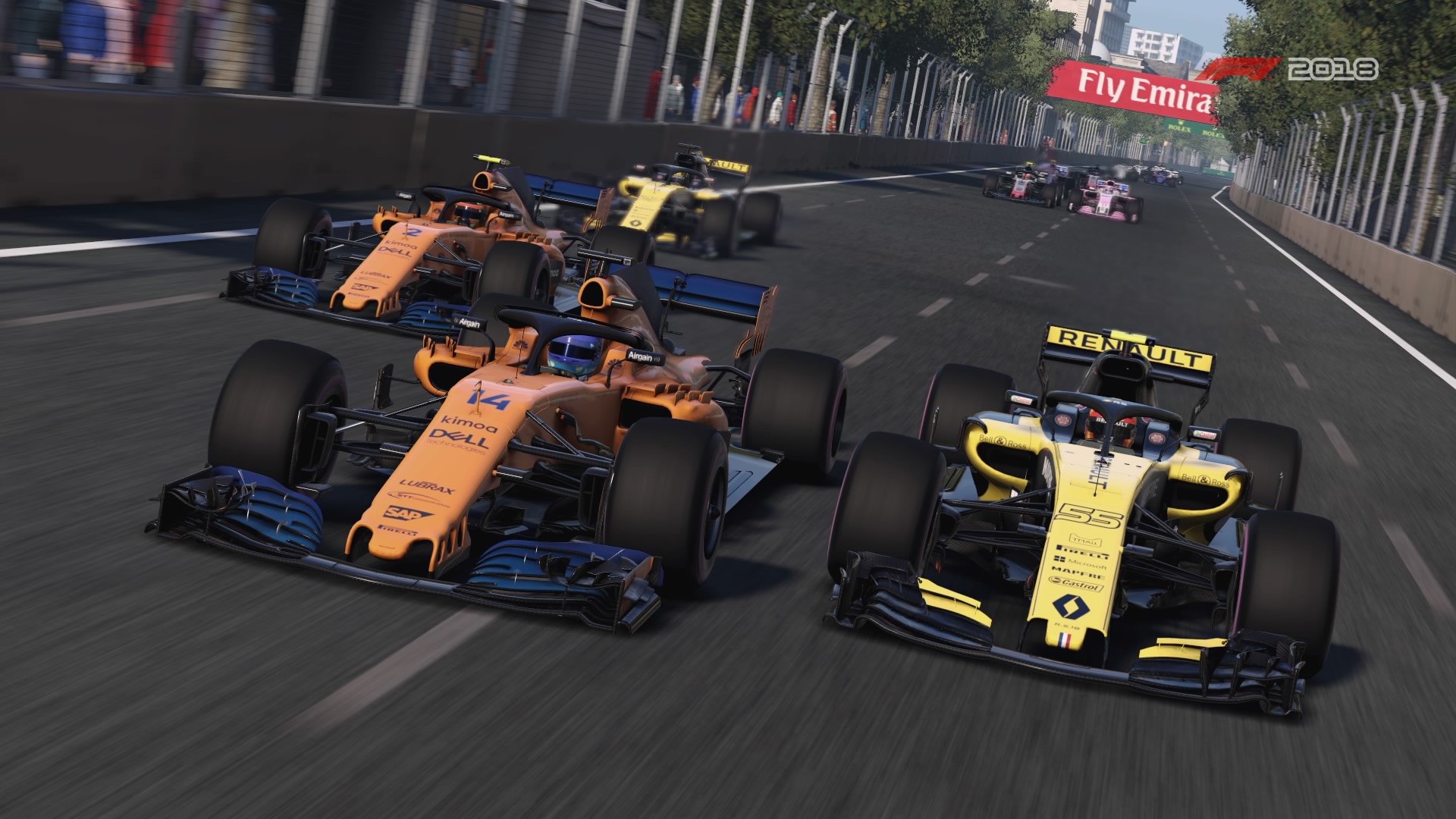 It’s difficult to believe that, as F1 2018 arrives, almost a decade has passed since Codemasters landed the rights to the official Formula 1 game series.

And as Formula One’s factories remain shut down for the summer break, what better way is there to fill the racing void than by sinking your teeth into this year’s edition of the official F1 game?

By building on the qualities of last year’s impressive iteration, F1 2018 succeeds in offering the most comprehensive and refined official title yet.

Let’s address the most important question on everyone’s mind straight away – Halo does not ruin the cockpit view.

If you’re a seasoned cockpit view racer, it will certainly be a shock to the system the first time you rumble down the Albert Park pit lane with a large carbon fibre protrusion in your vision.

Thankfully, other than when you’re driving down a long straight, it’s very easy to ignore the frontal column of the Halo and you’ll still be able to hit your apexes with equal precision to before.

But even if that’s still too much of an obstruction, Codemasters have included an option to gracefully remove the frontal column completely, making the cockpit view experience practically identical to before.

It’s only a very minor factor in the grand scheme of things as F1 2018 provides an enhanced experience over last year.

Liberty Media’s influence over TV broadcasts in 2018 has been striking, but Formula One’s rebranding surprisingly hasn’t revolutionised the virtual world.

Bryan Tyler’s stirring new theme music is present, as is the sport’s new logo. But besides from those elements, the game’s presentation, menu system and UI remains fundamentally unchanged from last year’s edition.

One neat touch is that FOM’s new team radio sting plays every time you receive or send a radio message while in the track.

It’s not a full simulation, but F1 2018’s handling model is both challenging and rewarding. The current high-downforce generation machines offer fantastic corner grip and the game provides the player with a great feeling for the cars, even through a gamepad.

Balancing the modern cars through high speed sweepers is a lot of fun. Turn off the driving assistance and you can quickly get a good feel for where the adhesion limits are under acceleration and braking.

Tyre and brake temperatures now theoretically play a greater role in car performance over a single lap. So just as the real drivers often have to run cool down laps in qualifying, you might find that running two consecutive hot-laps will not be an option at times.

The big new on-track feature this season is that the player now has full control over ERS deployment. Using a one-to-five scale, you can now strategise how much you want to ask of your ERS at any given moment on circuit.

Quicker than a rival in the final sector? Save your hybrid energy up over the first half of the lap and then whack it up to ‘overtake’ mode for a better run into that crucial final overtaking opportunity. Need to fend off a faster car? Deploying your energy wisely can help you frustrate your opponent.

If it sounds like too much to manage, you can set your deployment to ‘auto’ and not worry about it. But just as in real life, your engineer will regularly prompt you to adjust into a more suitable setting should your battery become overcharged or if you could do with a little more harvesting.

Since its return in 2016, the career mode has proven to be the most immersive and rewarding aspect of Codemasters’ series and this year’s mode is deeper and more enjoyable than ever.

Series veterans will be familiar with how the career mode works as it operates in much the same way as in 2017. Choose a team, choose a team mate, set all the race options to your heart’s content and settle in for a long season of practice programmes, position targets and car development.

This season, you’ll now have to face the media whenever you do something worthy of acclaim or blame. Journalist Claire will occasionally put questions to you after sessions in the form of an RPG-style timed dialogue choice system and your answers actually do matter. Choose your words carelessly and you may find they have an impact on your team.

If you blame missing out on Q2 because of poor downforce, your team’s morale will suffer and future aero upgrades will become more expensive and take longer to produce. But credit a breakthrough result down to your new power unit upgrades, your engine guys will get a boost, making it easier and cheaper to improve your car’s power plant further on in the game.

Your responses also help to shape whether your driver is a ‘sportsman’ or a ‘showman’ and that can affect how attractive you are to each of the 10 teams when it’s time to negotiate contracts.

If you always offer professional but uninspired answers to questions, your chances of being offered a seat at Red Bull are likely to suffer. Show some fire and maybe a hint of arrogance in your media responses, however, and if your results are good enough you might just find that Christian Horner will be more open to contract discussions.

And contract negotiations are themselves another new feature this year and possibly the most interesting of the additions to career mode.

You’ll start off in whichever team you choose as a number two driver with low expectations and respect to match, but after every four races you’ll get a chance to review your position in the team.

You can negotiate your qualifying and race targets, your standing against your team mate and extra bonuses like faster upgrade times or resource point multipliers. It’s all dependent on the respect you’ve earned on the track. The better you do, the more the team will be willing to offer to invest in you.

Set harder targets and you can stand to earn greater respect if you hit them. Fail to live up to them and the team will be more hesitant to offer you as many perks in the future.

It’s a relatively simple system that offers players far greater freedom to set the career mode targets that are suitable for them and also reflects the fickle nature of the sport. If you’re coming off a hot streak of strong race finishes, you can use that to barter a better contract position, but if you then disappoint, all those early successes will count for little.

It also makes switching teams mid-season a more viable option than ever. You can more realistically make a Sainz-to-Renault move to a new team in the middle of a campaign than previously, but you risk ending up in a worse position long term if your new team hasn’t invested in its R&D as wisely as you had with your old team.

With racing against the AI still as exciting as ever, F1 2018’s career mode is easily the most immersive single-player experience ever conceived in an officially licensed F1 game. Managing the media, team expectations and your limited components throughout a long 21 race season makes every single session feel like it matters. Even that hefty practice shunt in Monaco could come back to haunt you in the closing stages of a tight season.

Aside from the current championship, there’s plenty of additional content to keep you entertained. Last year’s version saw the welcome return of classic cars to the series and it’s great to see older legendary machines from the seventies and eighties like the McLaren M23, Ferrari 312T and Lotus 79 join the fray in their own category.

Like the existing classics, the new additions don’t quite handle as convincingly as some might hope, but they are accessible enough to give casual fans a decent idea of what it must have been like to be a Formula One driver in such a glorious era.

Disappointingly, the two new classic cars likely to excite players the most – the Williams FW25 and Brawn GP BGP 001 – are confined to the Headline Edition of the game or a future DLC release.

You can race classics online as well as against the AI with the option to run a multi-class race with all three eras of classics on track at the same time, making for a truly unique experience for a Formula One game.

The championships mode from last season returns to offer multiple short championships based on themes ranging from a street circuit series to wet weather races or a double-header series with a sprint and feature race with reverse grids. They add a novel variety to the game and whichever team you choose you will receive a target position relative to their performance, making it a fun way to try out all the cars on offer in meaningful competition.

Multiplayer is the main focus of many players and many will be pleased to hear that a new Super Licence system will hopefully help to improve matchmaking by putting safer and fairer drivers together in ranked races and avoiding having your races ruined by oblivious rivals or trolls.

As much as there is to do in F1 2018 and as immersive as it can be, there are moments when it will feel a little too familiar to long time players of the series.

It’s a little disappointing to see the exact same pre-session garage animations and victory animations from team principals recycled from the last two editions. David Croft will also describe how your chosen track “eats rear tyres for breakfast” on what feels like every circuit you visit – again, just as he did last year.

It’s odd when discussing a racing game that boasts 25 tracks to say that circuit variety could be improved. But a racing game of this quality feels like it’s crying out for a ridiculous fantasy bonus track akin to those you’d find in Psygnosis’ games on the original PlayStation. Or at the least, some of the classic tracks that featured in F1 2013 to complement the plethora of classic cars on offer.

As ever, there’s a sense that the greatest limitation of Codemasters’ series remains the very licence itself. Unless Liberty Media prove more flexible than their predecessors the next time the sport’s official game licence is up for renewal, features like driver transfers, junior formula, livery editing or even creating an entirely new team will remain only dreams.

If you’ve never played a Codemasters F1 game or if you or someone you know has even a casual interest in the sport, it’s never been easier to recommend a Formula One game than it is with F1 2018.

Experienced players may feel a growing sense of deja vu once the new game sheen begins to wear off while hardcore sim racing fans will still find frustrations in the details. However, when you’re locked into a 100 percent distance career mode race and a sudden safety car deployment forces you into a last minute strategy call that ultimately nets you a surprise maiden podium, it’s a reminder that Formula One games have never been as immersive and exhilarating as they are right now.

F1 2018 is not only Codemasters’ best edition of the series to date, it reaffirms it as one of the best sports game franchises on the market.