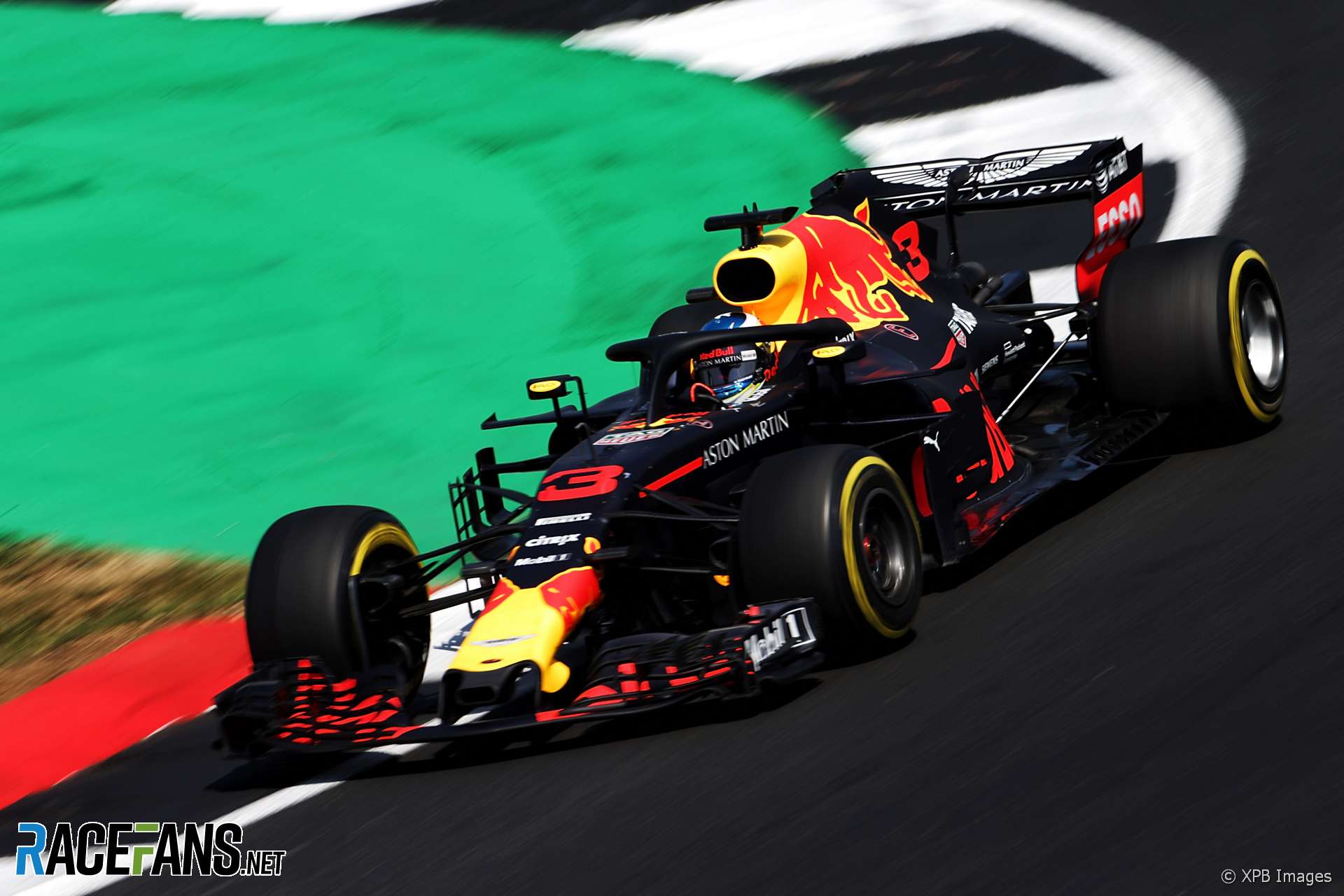 In the round-up: Daniel Ricciardo questions whether Formula 1 needs to keep chasing ever faster lap times.

Ricciardo pointed out that F1’s rising downforce levels have made corners relatively easy at some tracks like Silverstone:

I’m always a bit torn, like it’s all well and good going fast but if [Copse] is full and everyone’s doing it, it’s not really that exciting. It would be better [to have] less downforce and [be] sliding through there.

I know Sebastian [Vettel] and a few guys they just want to see the lap time as low as possible. But also what you get with more downforce is a more stable car. So it also looks… [Copse] is as fast as we’ve ever been but on an onboard it probably looks easy. Two or three years ago it was much slower but you’re probably sliding a bit.

It’s never fast enough, that’s the reality. We’re doing 1’27s [at Silverstone] or whatever and we feel we could go quicker. Even if we’re going 10 seconds a lap quicker we’re still going to want more. We’re never going to be satisfied so let’s just maybe make it a bit more.. exciting’s not the word, but different. Sebastian will roll over if he hears me say that!

"It could be interesting, because I obviously enjoyed a lot last year the Indy 500. I don’t know that car in a normal setup, in a normal circuit, so it can be a possibility."

"A lot of the other Formula 1 teams have business hierarchies that really don’t understand what racing’s about. I think they have a tendency to make some decisions that are a little more judgmental than, say, from a racing point of view."

"In 2010, I was doing Eau Rouge with Renault in qualifying with one hand because I was covering the hole to stop the rear wing and I was going through Eau Rouge one-handed. This was much more dangerous than my driving now, because then I was really driving only one-handed."

How Kubica could return to Williams (Motorsport magazine)

"Post-Hockenheim that prospect was rendered null and void, after a meeting in Renault's headquarters where it was agreed that Ocon would be a Renault driver in 2019, replacing Sainz."

Chadwick: Physically nothing limits women from succeeding in F1 – it’s not sprinting (The Times - registration required)

"To keep Chadwick racing this season has cost about £250,000 through sponsorships and parental support and she estimates that it could be four times that if she can step up to the next level of European F3."

"Rebellion Racing driver Bruno Senna, involved in an accident in Free Practice 1 at the exit of Copse Corner, has suffered a fracture to his right ankle, and will play no further part in the Silverstone meeting."

Does Jacques Villeneuve have a point about the difficulties facing young racing drivers:

I am 19 now. Have driven/raced a lot since I started in karts at the age of four.

I paid for all my racing expenses (karts, engines, air fares, hotels, food) from 2007 on by selling certificates from my main sponsor door to door, five nights a week, every week, creating a Karting school and doing motivational speeches.

With that money I raced many Rotax races like Florida Winter Tour, US Grand Nationals, Challenge of the Americas, Italian and Brazilian Karting Championships. I participated in multiple championships but NEVER had a real chance to win most of those races although I still had a Top10 in MiniMax at Grand Nationals in 2011 and Top15 in Rotax JR in 2014.

Why was it so hard? Because my budget was 10% of my competitors which translated in:

– 2 sets of tires/weekend
– One chassis every two years
– One engine and a borrowed spare.
– No data, no mega team.

My competitors, and I was in many championships with drivers that are now in F2 and F1 and whose parents are now buying F1 teams, had $300,000 a year budget for Junior Rotax, unlimited tires, 10 engines and three chassis per race.

Still, with my work for years, i moved to a Formula Mazda and then A ProMazda and won the 2016 Formula Car Challenge in the US. While selling dinner certificates to a group that was visiting my home track, they invited me to race F4 in China.

I went and won the 2016 FIA F4 Chinese Championship.

In 2017 I was invited to race F3 in Japan, which I did and raced for a novice team but still placed a bunch of sixths and sevenths in Fuji and Suzuka.
The team unfortunately folded and I was invited to drive for a great team this year but some of my sponsors decided to not continue.

I am on the hunt for sponsors everyday and every night. Two weeks ago, I won the Utah Enduro 6 Hour driving a 620hp Lamborghini Super Trofeo, thanks to the team that hired me to drive for them.

My future is very clouded but I am not giving up.

So I really appreciate Villeneuve’s and Hamilton’s comments, because what is happening in motorsports not only at the top but at the base of the sports is absurd.

The solutions are not that difficult. Budget cap in Karting. If I could do it and race in so many races with $25,000 a year that I would raise myself, everyone should. In my whole career, I was able to afford three days of coaching to learn as much as I could from a pro karter.

In the meantime, the “winning” kids were coached daily and home schooled. While I would be going to school, fundraising, selling door to door under sun or snow, they would be learning, practicing, testing, doing data and developing their engines and tyres. Then on the weekends, we would meet on these events, and we were supposed to compete on “equal” terms.

But there’s a caviat: most of these “drivers” won multiple championships but when they had to face financial challenges when moving to cars, they were not emotionally equipped to go after the money and work hard for it and they quit.

Unless they are on a completely different financial stratosphere like the usual suspects, they all quit. I have been blessed by luck, wonderful friends and by having the drive to go after the money all the tine and things have been happening to me.

But I met tons of great kart racers that were suffocated by the overly expensive Karting world, that never had a chance to move beyond the junior classes because the unlimited budget of other drivers, confined them to not even being able to pass to the finals and would go home on Saturdays with a broke spirit.

Thanks to my dad I persevered. In his words: “Karting is like kindergarten, high school. It is not the career, is where you learn about the career. Realise that karting is not the goal and the goal is pro racing.”

So whenever I would qualify 17th and not winning on a 45-kart field, I would understand that it was due to many factors, not lack of talent. But that was a hard process for a then 12-year-old kid, but my mind was beyond karting.
Changes are needed.
Bruno Carneiro