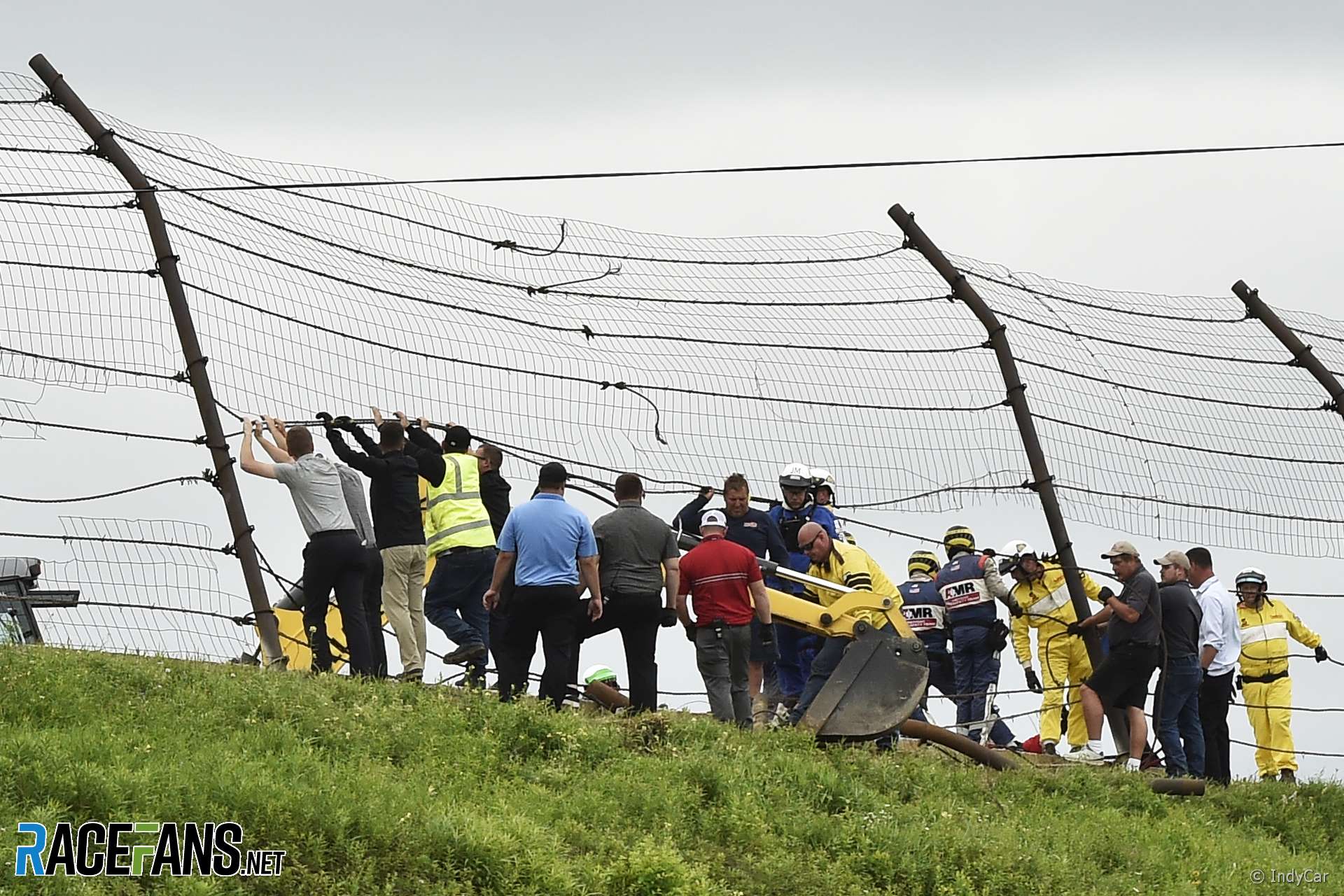 Before Alexander Rossi got in his car to start Sunday’s Pocono 500, the eventual winner of the race admitted IndyCar’s super-speedways still “terrify” him as a driver.

Anyone who witnessed the carnage which unfolded seven laps later will understand why. Robert Wickens’ car was launched into the air at 200mph, smashed into a debris fence and thrown back onto the track with violent force.

Despite fears for his life, Wickens was extracted from the car awake and alert. A helicopter flew the 29-year-old to a nearby hospital where he is being treated for extensive injuries.

Serious crashes like this happen with alarming regularity at the few remaining super-speedways and high-banked ovals on the IndyCar calendar. Justin Wilson was killed in a crash at the same track three years ago. Four years before that Dan Wheldon was fatally injured when, like Wickens, his car was launched into the fencing.

Sunday’s crash involved one of the sport’s most experienced drivers and the outstanding rookie of the season so far. Neither deserves to be singled out for blame.

Wickens is a newcomer to the series this year. He has excellent credentials in single-seaters: he beat Rossi, Jean-Eric Vergne, Daniel Ricciardo and Brendon Hartley to the 2011 Formula Renault 3.5 title. But there is little outside IndyCar to prepare drivers for the unique challenge of racing on super-speedways.

These two-mile-plus ovals are rare beasts. The 50-year-old Pocono Raceway is one of just two on this year’s IndyCar calendar, the other being Indianapolis. (The cars lap at similar high average speeds on the steeply banked 1.44-mile Texas Motor Speedway.)

The speeds involved far outstrip anything seen outside this form of racing. Will Power’s pole position average speed on Saturday was over 353kph. That’s around 100kph faster than we’ll see when F1 goes to its fastest track, Monza, next week.

Wickens and his rivals had ample opportunity to practice for this year’s other super-speedway race at Indianapolis. That round features a special rookie orientation session plus weeks of practice. But for the first race at Pocono with the new, lower-downforce 2018-specification aero kit – which had been tweaked since Indy – drivers had just a single practice session, partly due to rain on Saturday.

Some drivers, including Wickens, had extra running in a pre-race test. But despite this he admitted after qualifying he relied on the advice of team mate James Hinchcliffe when it came to tackling turn three flat-out for the first time.

Wickens brought his car home ninth at Indianapolis, first among the rookies. He crashed in Texas while trying to pass Ed Carpenter on the inside. That collision was not dissimilar to the contact with Ryan Hunter-Reay which triggered Sunday’s crash, though Carpenter was being lapped, and arguably should have left more room.

But while Wickens’ relative inexperience at Pocono may have been a factor, it would be completely wrong to characterise the collision as being the result of an impetuous ‘rookie error’. This was evidently a racing incident. Wickens was backing out of his attempted pass when the pair made the slightest of contact. Yet it almost had the worst possible outcome for both of them.

After the two touched, Wickens’ car rode over the front of Hunter-Reay’s, propelling it upwards into the impact-absorbing SAFER barrier. This absorbed some of its speed, but as it slid along the top of the barrier it swung up into the rows of tall, chain-link fence designed to contain debris within the track. This second impact caused another abrupt deceleration and sent the car into a sickening series of spins:

Wheldon was killed in exactly this type of accident, but he had the misfortune to be hit on the head by a fence post. But it wasn’t just Wickens who had a near-miss.

The onboard camera on Hunter-Reay’s car showed how close he came to being hit by the bottom of Wickens’ chassis. The DW12 chassis struck his roll hoop, breaking a piece of bodywork off:

IndyCar is remarkably fortunate that this double near-miss didn’t turn out far worse than it did. There are two important points to take away from this.

First is the quality of work which has been done over the years to improve driver safety to the point that this accident was survivable. However close to catastrophe IndyCar came, the fact remains the cars withstood the impact well enough for all the drivers to emerge unscathed, including three others who were caught up in the crash. IndyCar’s well-drilled medical team was on the scene immediately.

But these improvements in driver safety only came about through years of crashes and near-misses, of hard lessons learned and difficult decisions taken. The second point IndyCar must learn from this crash is that it needs to take another of those difficult decisions.

In a world where we’re used to seeing F1 and F2 cars racing with the Halo, Wickens and Hunter-Reay looked awfully vulnerable in this crash; in much the same way F1 drivers of the early nineties did after Ayrton Senna was killed.

How IndyCar should address this problem is a decision for informed experts. But none of the options are as straightforward as they may at first seem.

Should IndyCar replace the fencing, as Paul Tracy has suggested? But what alternative structure would pose less of a risk to drivers while also protecting the spectators behind it and allowing them a view of the action? (Note Wickens happened to hit an area which wasn’t in front of a grandstand.)

Should the series stop racing on super-speedways? This would mean dropping the Indianapolis 500, the championship’s centrepiece race which has sustained what remains of its popularity through and since the CART-IRL split.

Or should it follow F1’s lead and introduce greater head protection for drivers? This is what the championship has been working towards, though progress has been slow.

Simply bolting an F1-style Halo onto the cars would present a visibility problem in a championship where six of the 17 races take place on banked ovals. IndyCar has instead been working on a solution it calls the ‘windscreen’, which has already been tested by Scott Dixon and Josef Newgarden.

But is the windscreen strong enough to withstand the kind of impact it might need to? F1 tested its Halo by firing a 20kg wheel assembly towards it at 225kph. IndyCar’s windscreen is made a material which is also used on fighter jet canopies, but the series has not yet released details of how it performs in impacts.

The longer IndyCar takes to act, the greater the chance another of these crashes will happen, with worse consequences. Along with most of the drivers who took the start on Sunday, Sebastien Bourdais was running behind Wickens’ fourth-placed car when he crashed, and his words have a chilling resonance.

“I saw Robert in the fence, that’s the worst sight, really, other than being in it [yourself]. I was just really worried for him. It seems he’s conscious and awake. He’s hurt but I hope not too bad.