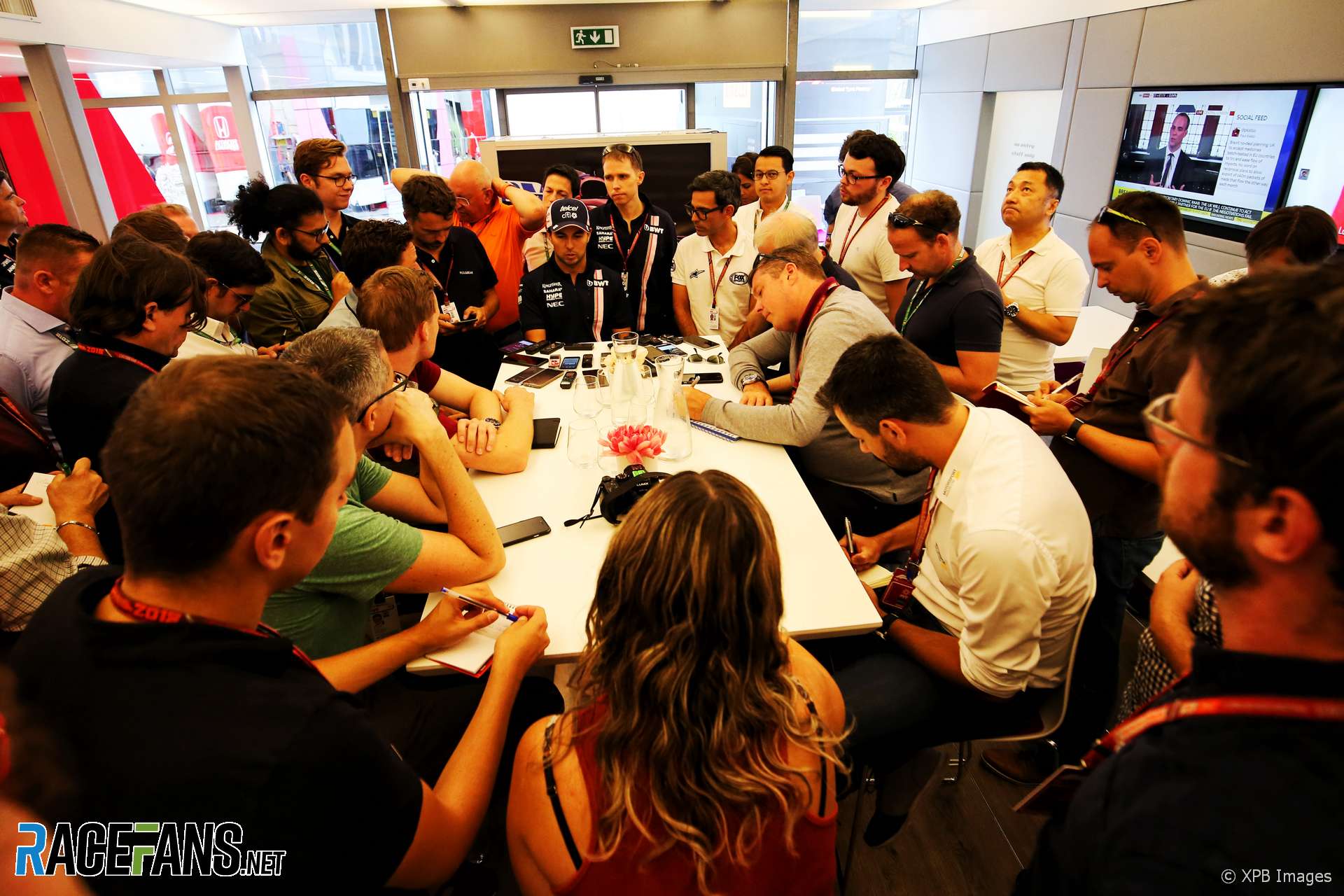 Apart from the fact that Spa-Francorchamps is my only home Formula 1 race – I’m dual-national South African-Belgian, and F1 has not returned to my birth country since 1993 – I’m thoroughly looking forward to the Belgian Grand Prix for two reasons: it’s F1’s “back-to-school” event after our well-deserved break, plus, of course, the race is contested on what consider to be the epitome of a grand prix circuit.

I had planned to depart for the 110-mile journey south at 9am in order to miss commuter traffic; however, overnight I receive news that Force India has lodged a request for a name change and a mid-season entry application in order to circumvent legal obstacles that could scupper its participation in Spa. Thus I string together a story, then hit the road.

Arrive at Spa – bits of the track are visible on the drive between E42 and the circuit, and once again I’m reminded of just how breath-taking the venue is: ultra-high-speed swoops and swerves through brooding forests that hold many dark secrets. It is the racer’s race track, and it would be a disgrace to eventually lose Spa to commercialism, as seems inevitable given F1’s love affair with “destinations”.

Last year Spa attracted 98,000 fans on race day – a record in recent times – but this year around 15 per cent fewer punters are expected, mainly due to a drop in Dutch interest. Has the orange brigade forsaken mega Max? On the contrary – but the Dutch are migratory folk, and this year’s German Grand Prix provided another chance of seeing Red Bull’s star in action, and hence the boost to Hockenheim’s numbers.

Couple that with the special Max Verstappen grandstand at the Red Bull Ring, and F1’s eye-watering ticket prices, and it’s little wonder that Spa’s numbers have dipped. There are lessons in there for Liberty: as in any franchise, adding outlets affects the profitability of existing franchise holders unless very carefully controlled, plus circuits can’t bank on a single driver for numbers. I hope Silverstone is listening.

The first media session: fittingly with Sergio Perez, who, of course, triggered Force India’s administration. He seems downbeat – no surprise given the uncertainty then surrounding the team – and I wonder whether he has had some second thoughts about his actions.

Esteban Ocon, potentially the biggest victim of the summer break’s reshuffles, is also downcast although, credit where it’s due, he puts on a strong face and insists all will work out well for him next year. Next up is Romain Grosjean, who is out of (Haas) contract after this year, and the Franco-Swiss is another to bat away the obvious questions about his future. One can’t help but feel, though, that it will end in tears for some.

Time for the FIA Thursday press conference, which is (again) split in two groups of four: absolutely the worst format for the written media although it panders to broadcasters. When drivers are listed for FIA duties, teams cancel their media obligations, we lose out on in-depth interview opportunities, and ultimately less coverage reaches the fans.

The group format also invariably means journalists are able to pose one, at most two, questions, the answers of which are immediately shared with the world. Not ideal, particularly when we have specific leads to chase.

The big story of the day, is though, Force India’s fate. I receive inside info from a source in the loop that the team’s name change has been approved, and that it is a matter of dotting ‘i’s and crossing ‘t’s. It is now a matter of waiting for official confirmation.

The news eventually breaks in somewhat confused fashion. It seems the FIA planned to upload its announcement ‘off-line’, then put it live later, but finger trouble meant it was momentarily made public before it was supposed to.

Thus we were able to bring you the latest in our series of breaking developments in this long-running story, which began with the revelation of Perez’s involvement in proceedings in Hungary.

One puzzle, remains: given the connotations of the Force India name, why did the team retain the words in its title? The answer to this emerged the following day, as you may have already read.

After all the excitement of the day getting to my digs – a room in the house of a local teacher where I have stayed for the last few years – seemed almost anti-climatic. Still, were at Spa, one of the truly great tracks, and there’s much to look forward to this weekend.