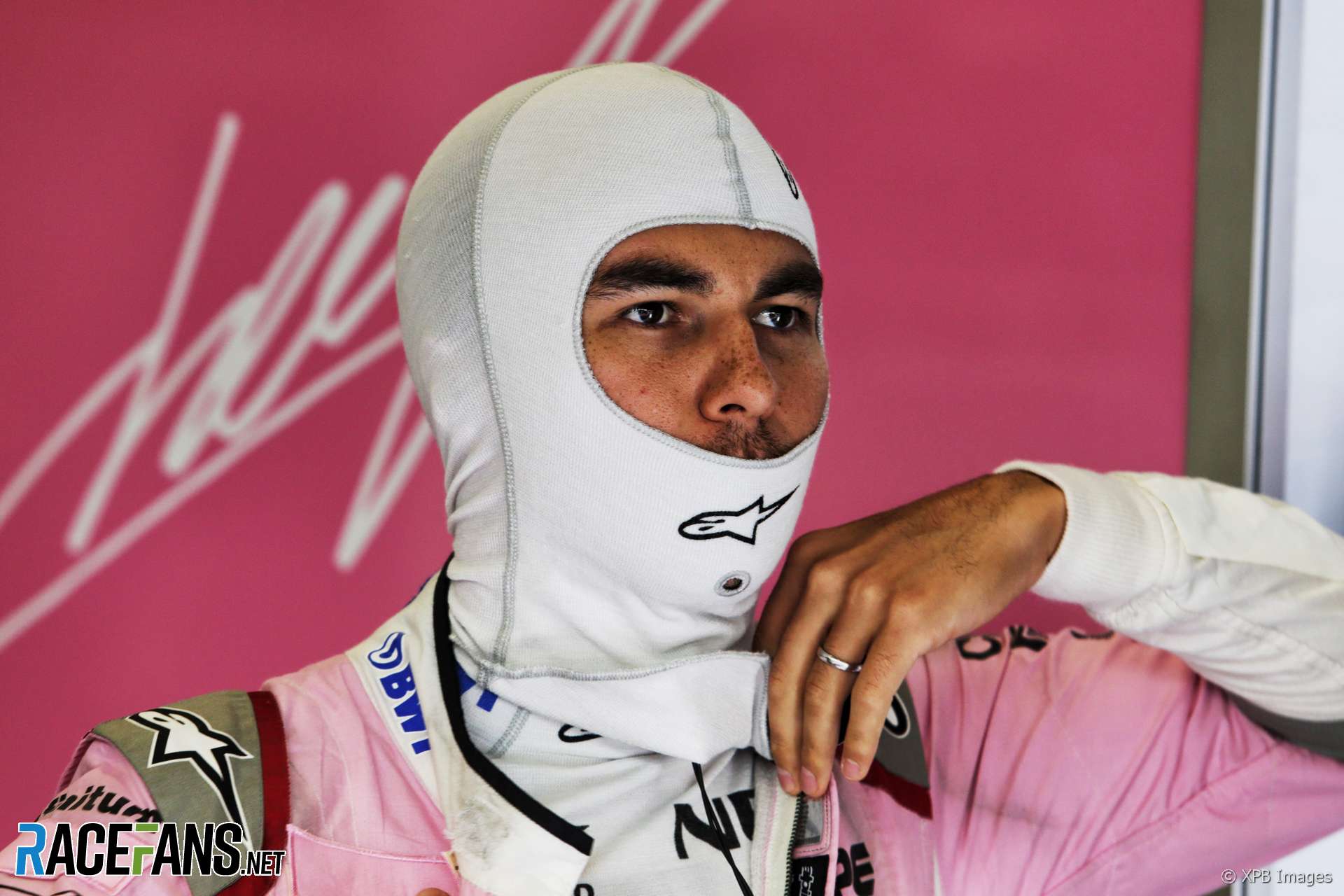 Is Sergio Perez set to stay at Force India following his role in the team’s administration proceedings? Here’s the latest from the Formula 1 paddock at Spa-Francorchamps.

Leave my digs after a typically French/Belgian breakfast – scrumptious croissants, preserves, yoghurt, fruit and coffee – and head for circuit. It’s but a short two-mile, five-minute drive to the circuit, and I’m immediately struck by how much emptier the campsites are, and how easily the traffic flows compared to last year, where even Friday’s commute took 30 minutes.

Clearly spectator numbers are down – a blow to the promoters, who recently signed a three-extension to their contract. As related yesterday, the double whammy effect of Hockenheim’s return to the 2018 calendar for the final year of its contract and Spielberg’s dedicated Verstappen Stand both impacted on Spa’s pulling power, and now there are gathering rumours that Germany could be back on the 2019 F1 calendar.

Hockenheim’s contract was for even years, while Nürburgring’s 2014 liquidation forced the Eifel circuit to withdraw from its deal for 2015 and 2017. But the latter’s new owners are believed to be interested in a risk-free contract, so could sign up for 2019. That would have a greater effect on Spa-Francorchamps’ numbers given the circuit is situated but 60 miles up the road.

I’m told, though, that Hockenheim has now listed ticket sales for 2019 although, crucially, no date is given.

Sources reveal that all nine teams have signed to permit ‘Force India 2.0’ to receive Column One revenues – a tenth share of 50 per cent of the teams’ ‘pot’ – which is worth around $60m (£47m) to the team over the next two years.

I confess to being confused as to why teams should waive their collective rights to 60 million bucks. Someone or something, somewhere and somehow got to them, and I can’t help feeling that we haven’t heard the end of the saga, particularly given that Uralkali continues to challenge the sale of the team to Stroll & Co.

FIA conference time, and apart from confirmation of the Column One situation from newly-appointed Force India CEO and team principal Otmar Szafnauer, the session is remarkable for suggestions from both Renault’s Cyril Abiteboul and Red Bull team boss Christian Horner that the much-vaunted clean-sweep rules change scheduled for 2021 be staggered on a priority basis.

Thereafter I roam the paddock in search of information and end up missing lunch while engrossed in conversations detailing the background to current developments.

Friday interview time: I draw the two Williams drivers, followed by Haas drivers and Renault’s Bob Bell. The latter is winding down his chief technical officer activities ahead of moving into a part-time role at the team from February in order to pursue some personal and business activities he had long hankered after.

I attend another media call with Szafnauer (and technical director Andrew Green), where he and I disagree on the status of Sergio Perez’s contract. I have information that the driver’s option to remain at the team was extended ahead of the Hungarian Grand Prix – significantly, before a company linked to Perez triggered the team’s administration.

Afterwards Szafnauer tries to assure me the two aren’t linked. Make of that what you will. On the track, Perez sets a scorching pace, putting the ‘new’ team well ahead of the midfield pack.

I catch up with the FIA on the day’s development, still concerned that a long, rocky path lies ahead before the entire Force India matter can be put to rest.

I’m famished, so head for dinner – fries and skewered beef – at the chippy in Malmedy before heading back to my B+B and an early night. I awaken to messages pointing to further Force India developments which I’ll investigate when back at the track.