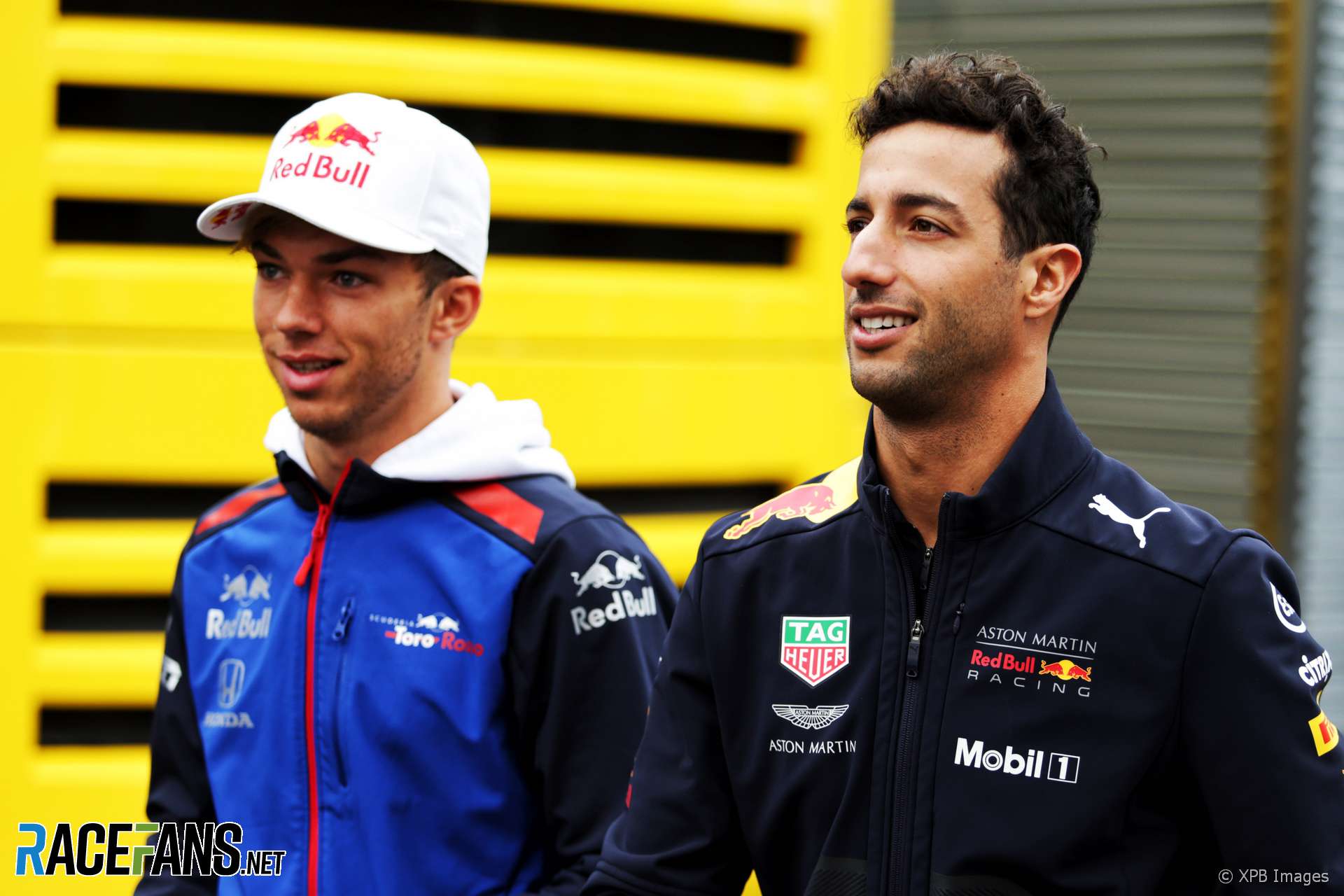 When asked by RaceFans, Ricciardo confirmed he won’t be doing anything in the simulator relating to Red Bull’s 2019 programme:

I feel it’s a better tool now for the engineers. They come up with 20 set-ups and it’s like I’m there in a way a bit of a robot on a simulator day. We give good feedback but it’s going through the motions in a way: ‘I did this, that improved’.

I think the simulator certainly got me to a [better] level in terms of my feedback with engineers, I really think it developed me very well for that. But as far as driving and learning from a driving point of view, I don’t think there’s really that much more to learn once you’ve done so much.

The real track will always be different. The feedback helped me a lot especially in the early days but now I wouldn’t credit a win to a simulator day. If I don’t go in the simulator before Japan I’m not going to say I didn’t do well because I missed the sim.

We are pleased to provide an update on Robert Wickens:#GetWellWickens ❤️🖤 pic.twitter.com/KmxLQNZ5KU

Phenomenal scene in St. Louis as the entire IndyCar field sends a message to .@robertwickens back in Lehigh Valley, PApic.twitter.com/cewXgN0Koh

This is you don’t want to do on an oval apron… scary moment! pic.twitter.com/9ojQ4Pn6gE

Probably fair to say that Stroll doesn't get much respect from his peers. Hardly surprising given he's got his dad paying for his F1 career, like it's a hobby.

Some things haven’t been thought through properly. A loud DJ set in the centre of the Spa paddock as the tv crews are doing their wrap up shows and the teams are having meetings. Can’t imagine who thought this was a good idea! pic.twitter.com/cjwJuUZUym

Q: Have you been following the political situation in Australia?
DR: You like hard questions! I don't follow politics.
Q: We've got a new prime minister.
DR: Really?
Q: Yep
DR: Is that recently?
Q: Yep
DR: How long ago?
Q: Yesterday… #F1

My friend Derek Daly does not have a racist bone in his body. 35 years ago he unthinkingly used a then-commonplace British turn of phrase in an American interview. Thankfully it's a phrase now fallen into disuse. But let's have some humanity applied here. https://t.co/J0ivhNoaxA

The last 24hrs have been quite an unnecessarily difficult ride for my family. There is A LOT I want to say… but I’m still here and still racing. I appreciate the support from @roushfenway and ALL of you. @LillyDiabetes has been a big part of my career and Im very thankful. #6

Gasly: 'I was sure Daniel would stay' (Channel 4)

"I didn't expect it because I was sure Daniel would stay in Red Bull for a year or two."

"We changed the tyres in the pit stop place and went straight out, so we knew how much fuel was in but maybe we should have done differently — put the car in, put more fuel in it and be out there in the end — but I don’t know."

Fuel gains worth 'over 20%' of Ferrari update (Autosport)

"You always expect to make big gains at the start and then for development progress to taper off. We've not found the taper yet."

Yesterday we revealed how the driver market is expected to move once Lance Stroll switches to Force India. Here’s @Jackysteeg’s assessment:

Well, this makes the whole Stroll-to-replace-Ocon thing a bit easier to swallow. More than anything, it would be a terrible shame if Kubica’s long-awaited return was at the net expense of one of F1’s brightest young talents. I do feel sorry for Ericsson if his career ends due to an event so far removed from himself, but he has been in F1 for half a decade and, aside from a handful of impressive performances, has done little more than make up the numbers.

Apart from Stroll getting a richly undeserved move up the grid, I’d be quite happy with this set up. I’m excited to see Ocon going up against Fernando. I believe Vandoorne would benefit greatly from a fresh start with Sauber. And most of all, it’d be amazing to see Kubica race again.

Of course, I’d prefer to Kubica replace Stroll and for Stroll to leave F1 to race in LMGTE-Am with all the other wealthy amateurs, but this is the next best thing.
@Jackysteeg