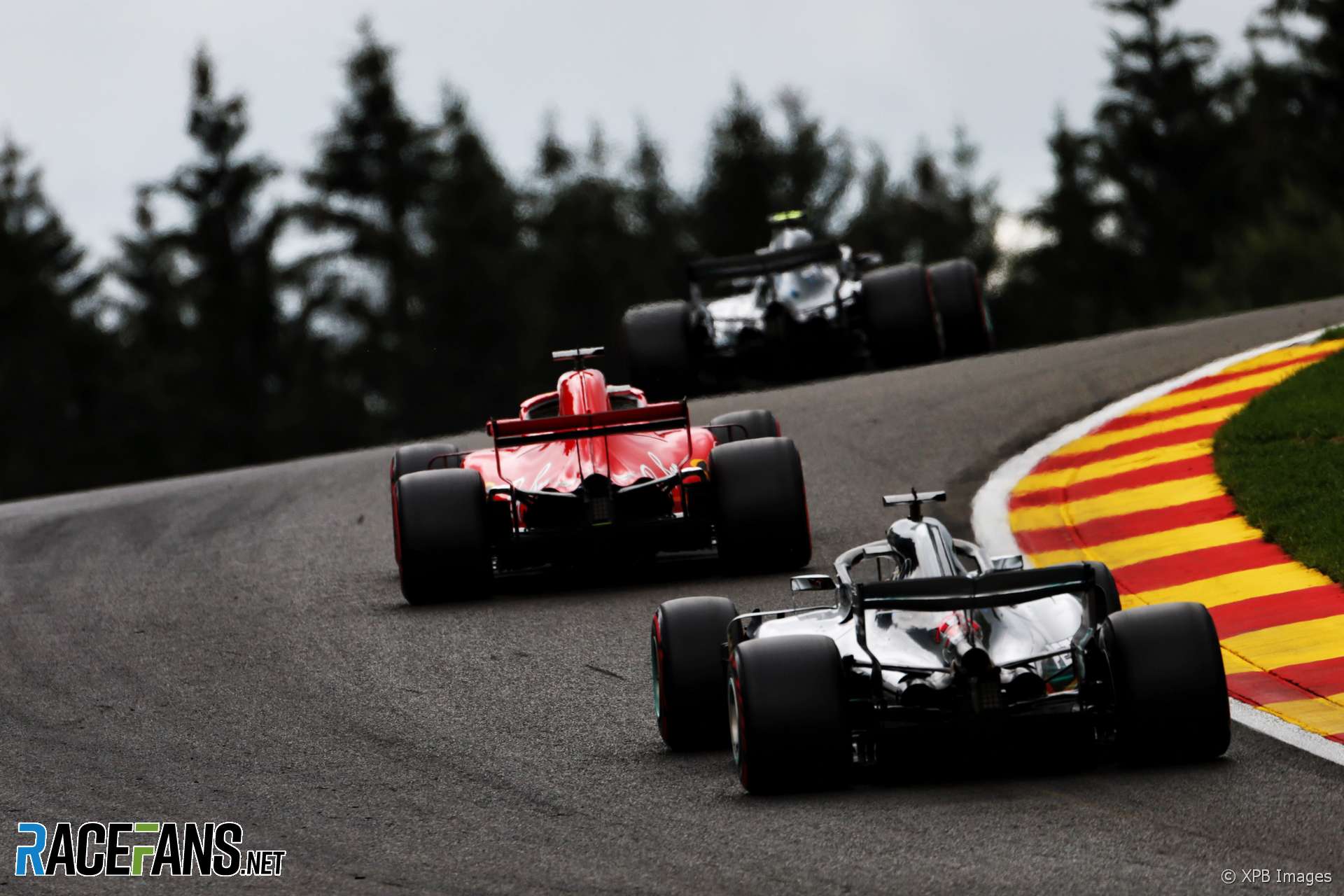 Sebastian Vettel must be thinking this feels a bit too familiar.

In Belgium, as in Hungary, Ferrari turned up with the quickest car over a single lap. But once again rain in qualifying handed an opportunity to Lewis Hamilton, and he took it, giving him the upper hand going into Sunday’s race.

But Spa is a completely different beast to the Hungaroring, and Vettel will start directly behind his championship rival, which should set up an exciting race.

After the short sprint to the La Source hairpin, the long, high-speed run through Eau Rouge, Raidillon and along Kemmel gives drivers the chance to slipstream and pass at the start. Vettel’s Ferrari is quick off the line and has a 4kph advantage in a straight line, so expect him to be on the attack from the start.

Energy deployment in the opening phase of the race will be critical. However Hamilton and Vettel use their power boosts to attack and defend in the opening corners could decide who emerges on top. During their brief battle last year, Hamilton wielded his to great effect o keep Vettel behind. But this time around, with the latest upgrades fitted to their cars, Mercedes is believed to have a slight edge.

However the full picture isn’t clear yet, according to Mercedes team principal Toto Wolff. “It’s very difficult to judge because we haven’t seen the real performance because it was wet in the session where everybody would have switched [up] the engines,” he said.

Nonetheless it is clear that Ferrari’s strength is on the straights. In dry running Vettel was quickest in sectors one and three but Hamilton pulled almost four tenths on him in the middle of the lap.

That suggests Hamilton is running slightly more downforce on his Mercedes. This could help him reduce tyre sliding and make his rubber last longer.

Note that Q2 was dry, so the drivers who reached Q3 will have to start the race on the tyres they used in Q2. They all used super-softs with the exception of Bottas, who will start on softs after being relegated to the back row by his power unit change penalty.

Pirelli believes drivers should be able to make the super-softs last until lap 16, at which point they can run to the end on the next-softest compound, the soft. Strategy will therefore be all about who dares to make that pit stop first.

But Spa is also a track where Safety Car and VSC periods are a constant risk due to the high-speed nature of the circuit. Several times already this year these have created unexpected changes at the front.

The championship protagonists won’t have their team mates close at hand to begin with due to Bottas’s penalty and Kimi Raikkonen running out of fuel during qualifying. If the latter makes his way past Romain Grosjean and the Force Indias quickly he could become a factor in the fight for victory.

Following their rescue from administration, Esteban Ocon and Sergio Perez’s sweep of the second row for Force India is the feel-good story of the weekend. But what kind of result can they expect to come away with? They’re unlikely to keep Raikkonen and Bottas behind, but they may be able to offer more of a challenge to Red Bull.

Over a single lap, Force India were giving away less than half a second to Red Bull in qualifying. That gap is likely to rise in the race, as Force India won’t have the benefit of Mercedes’ qualifying engine modes.

But the contrasting strengths of the cars shows Red Bull could have difficulty making their way past the Force Indias. The RB14s may be almost a second quicker through the middle of the lap, but that’s not usually where the overtaking gets done. The Force Indias are quicker through sectors one and three, indicating Red Bull may have to rely on strategy to get them ahead.

For Force India the priority will clearly be to bag as many points as possible, having had their tally reset to zero. Above all the team needs to avoid a repeat of the costly clashes between its two drivers at this track 12 months ago.

Will it be Hamilton or Vettel? Or can you see a surprise winner emerging in the Belgian Grand Prix?