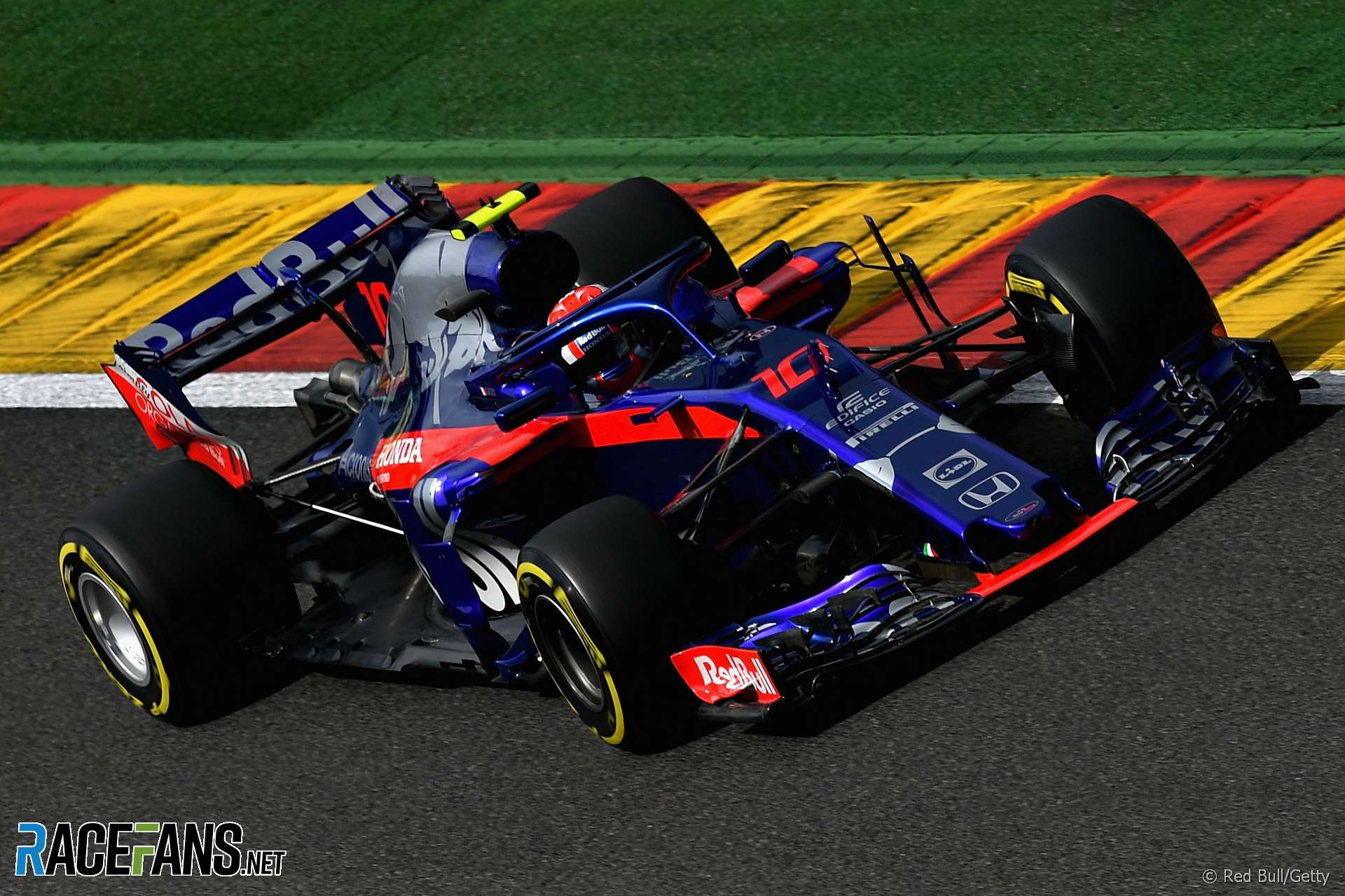 Pierre Gasly, Max Verstappen and the Force India drivers were RaceFans’ stars of the Belgian Grand Prix weekend. Here’s why.

Verstappen’s future team mate continued his strong qualifying form. In a Toro Rosso which was ill-equipped for Spa’s long straights he fell just short of Q3 and qualified 11th. Promoted to 10th thanks to Bottas’s engine penalty, Gasly dodged the lap one chaos to emerge in eighth. He stayed out longer than he preferred in the first stint under pressure from Ericsson.

However Ericsson lost time behind Brendon Hartley after pitting, which made the second stint much more comfortable for Gasly and he cruised to a solid points finish. His only mistake of the weekend? Spinning on his way out of the pits in final practice…

Red Bull knew Spa would be a struggle due to their power deficit on one of the most power sensitive tracks. Rain in Q3 could have been their opportunity, but Red Bull, expecting the rain to last longer, only fueled Verstappen for one flying lap, which meant he didn’t get to run when the track as at its driest.

Nonetheless Verstappen out-qualified Ricciardo and from there avoided the first corner carnage and passed Grosjean before the safety car was deployed. By lap 10 he was past both Force Indias, and though the rest of the race was a quiet one he was far enough up the road to finish ahead of the recovering Valtteri Bottas.

On a weekend which began with doubt over whether Force India would even race, Ocon delivered a superb third on the grid for the team in tricky conditions. The team gambled on starting a lap on slicks at the beginning of Q3, while the others pitted after their out laps, but the conditions were already too wet.

Their delayed switch to intermediates paid off in the end as their tyres were one lap fresher than their rivals’. The temptation to pull off a heroic four-wide pass on Hamilton, Vettel, and Perez at the start must have been huge, but Ocon wisely backed out at the last moment, though that cost him a place to Perez. Ocon’s strong performance was timely amid question marks over his future at Force India.

Both Force India drivers did their team proud last weekend. Although Perez was pipped by Ocon in qualifying, after a heart-stopping near-miss at Raidillon, he got ahead of his team mate in the race and finished there, as DRS meant he had no realistic chance of keeping Verstappen and Bottas behind.

Nico Hulkenberg’s weekend was off to a bad start before it had really even started when he was forced to start from the back due to an engine change. However it was his own colossal – and uncharacteristic – mistake which ended his race early, along with that of four other drivers.

Heading into turn one he misjudged his braking point and punted Alonso over Leclerc. It set off a chain reaction that put Raikkonen and Ricciardo out too Hulkenberg readily accepted blame and was given a 10-place grid penalty for the Italian GP.

Last in all three practice sessions, plus qualifying and the race. It looked as though Stoffel Vandoorne had turned a corner when he reverted to an old chassis at the Hungaroring, but his home race was another struggle. It didn’t help matters that he suffered car problems throughout Friday and was pushed off at huge speed by Bottas during final practice.

In the race, McLaren gambled with their strategy and pitted Vandoorne for mediums during the early safety car. He was able to go to the end but he was so far off the pace of the rest of the field that he couldn’t make up any places.

Lewis Hamilton had the upper hand on Sebastian Vettel after a shower at the beginning of Q3 forced everyone on to intermediate tyres. It didn’t take Vettel long in the race to get by the Mercedes driver with the help of the slipstream and an upgraded Ferrari engine on the Kemmel Straight. He led every lap after that and came out just ahead of Hamilton thanks to a 2.2 second pit stop.

Damage from the lap one crash ultimately forced Raikkonen and Ricciardo out. Leclerc and Alonso were also eliminated through no thought of their own got unlucky thanks to Hulkenberg. Both were helpless to avoid the collision when Alonso was sent airborne over Leclerc and they both were both lucky to escape unscathed, particularly the Sauber driver.

Bottas was a part of a separate turn one crash when he braked too late and rear-ended the Williams of Sirotkin. He was forced to stop for a new front wing but still recovered to fourth, and kept the position despite a penalty.

Grosjean had a clean weekend with no accidents and finished ahead of his team mate in qualifying and the race, though Magnussen was stronger in the second stint. Ericsson took advantage of several retirements to score his fourth points finish of the season. He was stuck behind Gasly for the first stint and had to fight his way past Hartley afterwards.

Carlos Sainz Jnr had a less than impressive qualifying as he failed to make it out of Q1. His strategy in the race didn’t help his recovery efforts. He started on the mediums which lacked so much pace that when he switched to the super-softs halfway through the race he couldn’t make up the time.

Both Williams drivers managed to avoid the chaos on the opening lap and also avoided most of the action for the rest of the race since the car simply lacked the pace to fight with the other teams.