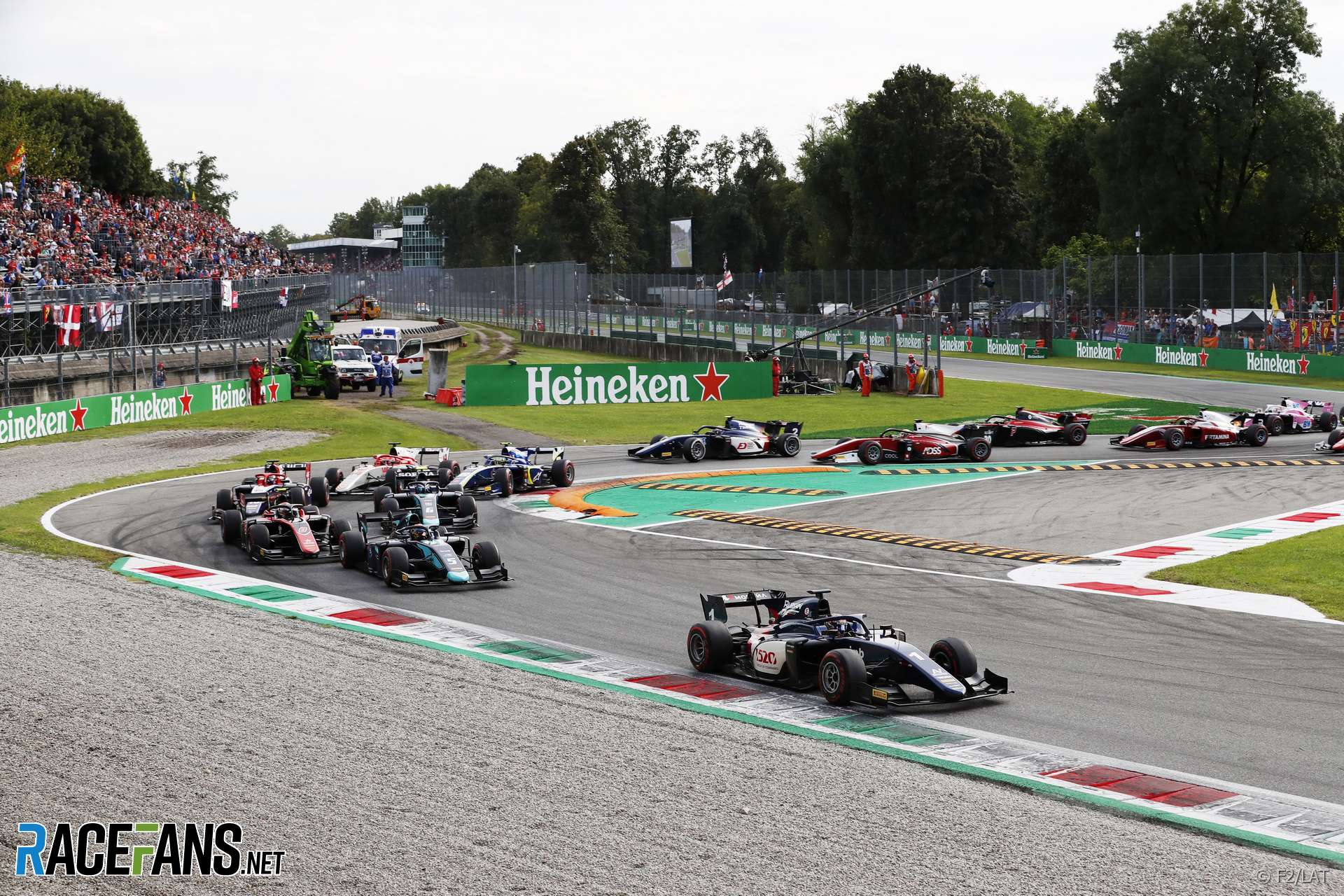 Tadasuke Makino has taken his first F2 win in the feature race in Monza after an extraordinary charge. He took advantage of alternate tyre strategy to go from 14th on the grid to first and controlled the race for twenty-five laps.

George Russell and Sergio Sette Camara had taken the front row in qualifying, however, the latter’s position was ruined with starting issues that saw him unable to join the formation lap in time and relegated to the pit lane.

This gave Alexander Albon and Artem Markelov free space to chase Russell into turn one, going three wide into the corner and letting the Russian take the lead with the pole man down to third by turn two.

Sean Gelael also made a great start, gaining six places from seventeenth to eleventh, while Lando Norris had to wait until lap two to finally move past Luca Ghiotto and up to sixth, starting well back following a disappointing qualifying.

On lap four Albon managed to hunt down Markelov and passed him with an aggressive late-braking move at the first corner. This briefly distracted from the surprising progress of his team mate Makino who almost immediately appeared in third place, having already gained 11 places.

Markelov re-took the lead on lap five, only to be immediately grabbed by his team mate. Makino, who started on the medium compound tyre, simply outbraked the super-soft-tyred drivers to a degree that almost made him look as though he was driving a different car.

With the pit window still one lap away from opening, the other drivers struggled to keep their shredded super-softs alive. Degradation was so severe on the compound that teams tried double-stacking pit stops, rather than forcing one driver to stay out for another lap, leading to particularly slow stops for Russell and Sette Camara.

The race was then led by Makino and both MP motorsport drivers: the perpetually misfortunate Dorian Boccolacci caught a rare break having stepped into Roberto Merhi’s car; and Ralph Boschung, whose season has been incident-strewn. The trio were the only drivers to start on the harder compound. Makino’s lap times were a clear second quicker than the pair behind him, allowing him to draw out a 15-second lead by lap 11.

Markelov and Russell ended up in a fierce tussle for the functional race win, with Albon chasing behind. A bold move by Albon at Parabolica left Russell furious – and saying that Albon should be forced to give the place back for dangerous overtaking – but unable to reply on track as he fell into a duel with Norris that would see out the rest of the race.

Makino’s lead over Markelov was nearly 45 seconds by lap 19, with the Russian able to pull slightly away from Albon but struggling to take tenths off the gap to first each lap. Despite Boschung and Boccolacci’s times continuing to be slower than Makino’s, they managed to hold onto second and third place until Boccolacci pitted on lap 20.

With well over forty seconds gap banked, Makino looked safe for the win. He and Boschung stayed out until lap 25, with Markelov steadily gaining as the MP driver slid gradually backwards from Makino, more than 22 seconds separating first and second by the time Boschung pitted.

Makino finally pitted on lap 28, emerging safely in the lead for the final two laps to bring home a Russian Time one-two finish with Albon completing the podium.