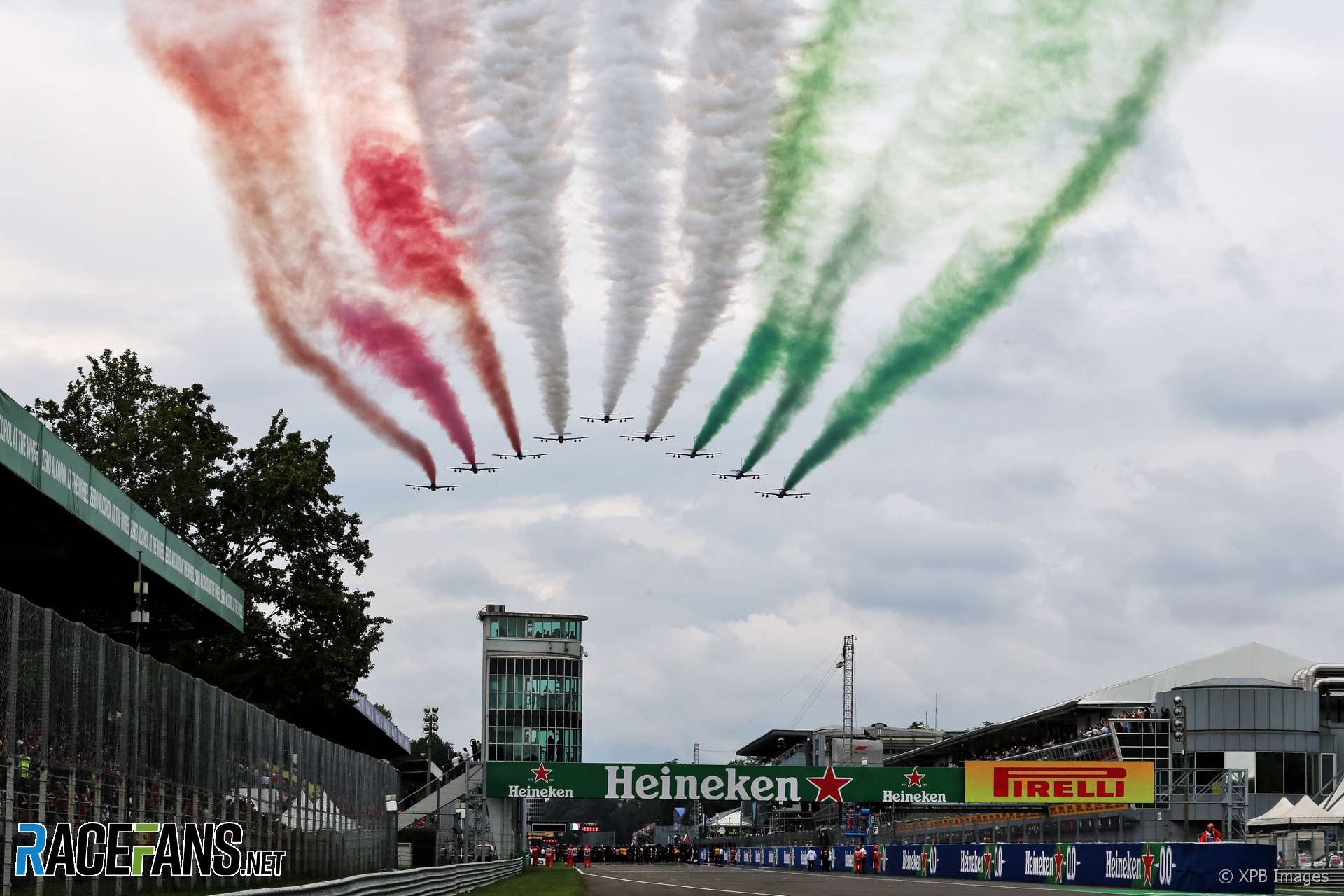 A Ferrari front-row lock-out leads to packed stands at Monza for the final European Formula 1 race of 2018. Dieter Rencken brings his final report from the paddock.

Up and about, sort check out, then depart for circuit. Skip B&B breakfast in favour of McLaren’s full English, and so I’m out of my digs and on the road within the hour.

Arrive at circuit – seems Monza’s in for a good day, for race day traffic is heavier than I recall from previous years. Possibly Ferrari’s front row lock-out has added last-minute ticket sales, but more likely last week’s win in Spa for Seb has done the trick. Either way it’s good news, even if it means circuit traffic control is more chaotic than usual. The promoters claim a crowd of 87,000 post-race.

My route takes me through local golf club access roads, and I’m amused to see a spectator marshal directing fans to the left side of the road, while 100 yards up the road her colleague directs pedestrians to the opposite side. They’re blissfully unaware of the confusion due to standing with their backs to each other…

Eating with media colleagues at McLaren, in particular a dedicated Roland Ratzenberger fan, seeking support for a movie about the Austrian, who lost his life at Imola the day before Ayrton Senna’s death. I wish Peter well with his project – it’s good to see initiatives about lesser-known drivers, who, too, deserve recognition. That a driver dies prematurely does not mean he could not have scaled great heights, but for fate.

I’m introduced to Nina Peterson, daughter of Ronnie, who lost his life at Monza 40 years ago. She’s in Monza to do filming about her father, and we discuss those days, then compare Swedish compatriot Marcus Ericsson’s horrific accident at roughly the same spot on Friday, from which he walked away unscathed. It’s great that Nina harbours no tangible bitterness towards the sport that claimed her father.

I’m unashamedly on the prowl, seeking out Helmut Marko, Red Bull’s F1 consultant and 1971 Le Mans winner in a Porsche 917. I have a line drawing of the car – the only version to race with a full magnesium chassis – and I’d like the Austrian to sign it for my collection. Eventually I track him down, and – slightly fanboyishly – ask whether he’d mind autographing the aluminium print.

As Helmut graciously does so he relates a marvellous story: At end-1971, after the car was outlawed due to a capacity reduction, he was offered the car for DM100,000, then about £20k. He turned the opportunity down, then 15 years later saw it on display in a museum. He enquired as to its value, and was told it was insured for DM10m (£2m).

“Recently one that hadn’t even won Le Mans sold for $15m…” he says, shaking his head wistfully.

While waiting for Helmut I join two ex-F1 drivers for a chat, and am amused by their main topic: the costs of their respective hair transplants. To spare them embarrassment they shall remain nameless, but all I’ll say is that both were active within the last five years…

I spy Pirelli CEO Marco Tronchetti Provera, so approach him to discuss the FIA’s 2020-23 tyre tender, which marks the first time that Pirelli has faced competition. I ask whether he’s concerned that Pirelli may be outbid by the other brand – believed to be Hankook – referred to by FIA president Jean Todt on Saturday.

Tronchetti is adamant: “We don’t want the deal at any price; on the same terms as present we’re interested, but no bidding war.” May the brand that’s best for F1 overall win.

Late breakfast means I have little appetite for a full lunch, so grab some ham and cheese sandwiches in the media canteen, then have a helping of fruit salad. That should see me through to tonight, and maybe beyond.

Thereafter its catch up time: a couple of team members indicate they’re increasingly peeved by F1’s later race start times, as many now spend ever fewer nights at home due to being unable to catch late Sunday flights as previously.

One of them maintains she checked with broadcasters, who recorded no improved audience ratings due to time shifts. Spectators are in the same boat, I tell her: many complain that now need to take Mondays off for the same reason. Attending races is expensive enough, but losing additional vacation days compounds the issue.

On the grid, absorbing Monza’s marvellous atmosphere. The circuit’s soul seeps through every asphalt pore, tradition hangs heavily in the royal park, and I savour every whiff as I scan the noisy stands packed with tifosi and true petrolheads. By comparison, grid walks at bland “destination grands prix” have all the glamour and feel of negotiating zebra crossings amidst commuter traffic jams.

Post-race interviews start – these have become fewer this year due to drivers team bosses rushing out post-race to catch whatever flights they can. I grab Pierre Gasly, who is vocal about Fernando Alonso’s on-track conduct.

I also chat with Mario Isola of Pirelli, who states that rain on Friday plus a shortened second practice session (due to Ericsson’s crash) means teams were unable to collect sufficient set-up data, and hence some blistering. During his session Vettel agrees with Isola’s reasoning, and given he was one of the victims, it stacks up.

Depart circuit in the knowledge that the Renault’s appeal against Haas for non-conforming floors is unlikely to be resolved soon. I’m due at my B&B near Malpensa at 9pm local, and make it with five minutes to spare. An early night beckons as I’m on a red-eye flight to Brussels – so leave Keith and co. to handle Haas’s eventual exclusion over an irregular floor.

‘Wonder whether the team will appeal?’ is my final thought after the last European race of the season. It later transpires they will…

The Paddock Diary will return at the Russian Grand Prix.