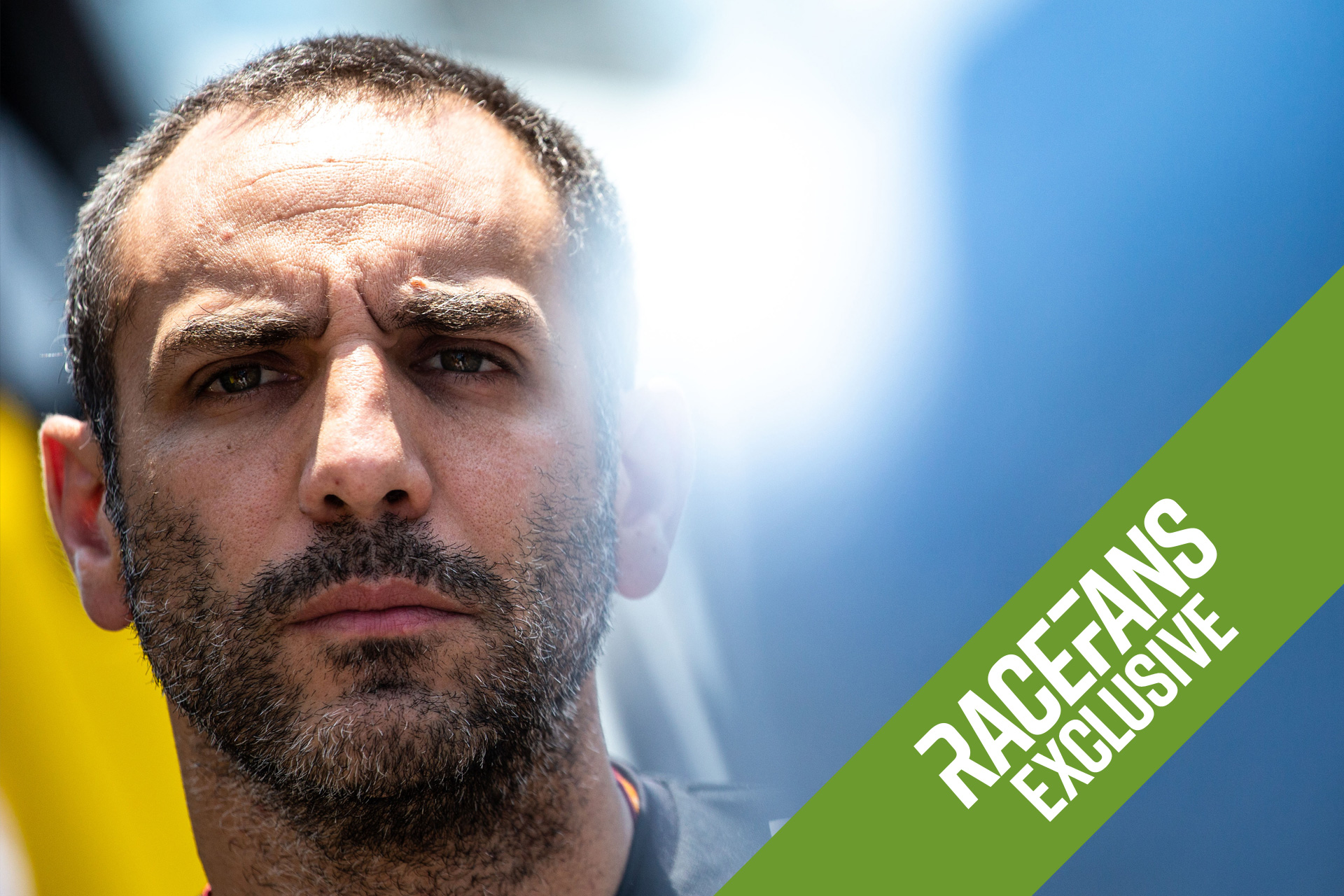 Halfway through the third season of Renault’s return as a full manufacturer, the team is in an unusual situation. It has ramped up its facilities and headcount rapidly, yet the sport is considering a budget cap which could limit the scope of its expansion.

Abiteboul offered a lucid and incisive take not only on his team’s situation, but also the future direction of the sport under Liberty Media, and how they are intertwined.

The day before I sat down to speak with Cyril Abiteboul, a multiple-discipline engineer who graduated from a number of France’s most illustrious lycées and universities, he made what turned out to be a prescient suggestion about Liberty’s plans for 2021. Speaking in the official FIA press conference, Abiteboul argued that a complete reset of Formula 1 – technical/sporting regulations, commercial, regulatory process – would be ambitious, and that it would be preferable to stagger introduction, as previously reported here.

“I just think that by trying to achieve that there is a risk of actually achieving nothing, which I think will be the worst situation for Formula 1,” he explained. “I’m just saying let’s be pragmatic and let’s make sure that at least we secure some of the most pressing and important changes.

When I press him on it during our-one-to-one chat, it is clear he has no doubt which area he sees as a priority to target for 2021, and which components of Liberty’s grand plan can be delayed.

“Our priority will be an issue that’s commercial,” he tells me. “Because that’s what’s driving the strategic. The financial distribution.”

But surely that goes hand-in-hand in with a budget cap? The less you spend, the less you need.

“The cap is really important, because with the cap, if we have to be at 150 (million dollars), we are already above 150. It’s a problem, it’s a small problem for us, [but] it’s a huge problem for [Red Bull], for Ferrari.”

“It’s a huge problem,” emphasises the man whose first senior position within Renault’s F1 operation was as business development director. Thus he knows of what he speaks.

“We need clarity with that immediately. Otherwise what is going to happen is that all those teams, including us, will say ‘It’s too late’. Then the budget cap will not happen. So I think priority number one is the budget cap and money distribution.”

Equally important for Abiteboul, as flag bearer for what is (by some margin) the largest motor manufacturer alliance in F1, is what the sport’s raison d’être should be.

“What will be the brand footprint of Formula 1 [by 2021],” he asks rhetorically. “Does Formula 1 continue to stand for technology, for road relevance? What are its key performance differentiators? The driver? Aerodynamics? Engine technology, hybrid technology?

“If the financial side is good, but suddenly Formula 1 is not road relevant at all, that will create a pressure back for us. I’m not saying that the answer would be ‘no’, because it may still be relevant purely from a show business perspective, purely entertainment, on the basis that it’s cheaper because of the final choice. But at least these are some [of the] questions that need to be addressed as quickly as possible.”

At the time we spoke Renault, the largest car company in F1, was effectively excluded from the Strategy Group, the sport’s primary governance process. (This may change imminently: the group is meeting today and Racing Point Force India, which was previously a member as Sahara Force India before going into administration and returning to F1 as a new entry, is likely to forfeit its place to Renault).

“But, if I was in, I would prefer to change it and that we respect the new governance structure. I think that having a governance structure that is not adapted, that [is why] we are not respecting it. That is an important point. We don’t have necessarily a closed mind on it, but we need again to have some clarity on the way and shape that things will be taking for the future.”

Abiteboul’s response, while illuminating, does not address the fundamental question, namely Renault’s exclusion from F1’s Strategy Group, so I come at it from a different angle: Given that the Strategy Group decides F1’s future agendas, is he comfortable at Renault being excluded from that process?

“No, we’re absolutely not comfortable. I understand why we are [excluded], and you know [why]. We’ve been in this sport since 40 years; we appreciate it’s a very meritocratic sport, where you need to deserve your rights, whether they are in terms of influence or political. That’s why we will discuss about the situation.

(Renault is excluded from the Strategy Group as the team was absent from the sport at the time the current process was devised, and since its return in 2016 has not posted the requisite results to be co-opted as best of the rest outside of Mercedes, Ferrari, Red Bull, McLaren and Williams).

“But I respect, and we respect, the world in which we compete. But we know there is a very simple way to be part of the Strategy Group next year. And by the way, I don’t know what’s happening in the Strategy Group now that Force India is starting from scratch as a new entry.

“My concern is now that the whole process of rule-making in Formula One is not completely crystal clear to me. It is crystal clear in the way that it’s wording in the contracts, but when I look at what’s happening in reality, I think we should have all a better discipline in the [paddock].”

No aspect of F1’s future rules has provoked greater debate than its engine rules. Is it true that all four engine manufacturers are aligned on the new engine regulations, having pushed to retain the MGU-H against the wishes of Liberty and, to a lesser degree, the FIA?

“I don’t completely confirm that,” says Abiteboul somewhat enigmatically. “I think what we all agreed is on a set of objectives. And basically I think that there was a bit of exaggeration, of rushing into the conclusion on the objectives to then what it meant in terms of change to the engine regulations.

“To be much more specific: for instance, one of the objectives was that the power unit would be simpler. I think everyone interpreted that objective as ‘Let’s remove the MGU-H’. And I think the removal of the MGU-H, which was specifically referred to, was never really unanimously agreed or confirmed by all parties involved.

“I confirm that it was a possibility, but we are never convinced that it was an absolute necessity in order to reach the objectives that we had all agreed upon. So that’s the first element.

“The second element was that there were two parties in particular that were apparently in favour of removing the H [component], which were Red Bull and possibly a newcomer, even though I can’t say for sure because I was never exposed to that newcomer myself.” (The newcomer was thought to be a Volkswagen Group brand).

“Circumstances change, as we like to say sometimes in Formula 1, and in particular specific circumstances changed for Red Bull. Finally Red Bull, now that they are in agreement with Honda, do not feel the necessity of removing the MGU-H anymore.

“It’s a fact that there is no newcomer and that Red Bull, who’s never been an engine manufacturer, by the way, sort of changed their position on the MGU-H. So I think this is mainly it. But frankly, as we speak here in Spa, I have absolutely no idea of what really will be the regulations for 2021. I really don’t know.”

Engine suppliers, all off-shoots of major motor companies, have spent hundreds of millions (“maybe half a billion”) on developing the technology to comply with F1’s regulations, yet could be required to dump a technology that has now – five years on – gained road relevance all on the whim of a commercial rights holder, he explains, shaking his head in conclusion.

Red Bull’s decision to take a supply of Honda power unit next year leaves Renault with just one customer team, namely McLaren. This is hardly a ‘B team’ in the sense that some of its rivals have, and which many in F1 fear are becoming more widespread. Would Renault not be better served technical and politically by having more allies?

“No, because for me it’s two different things. We discussed about another team or partner team, [then] there is a B team. We have never, never, treated our customer teams or our partner teams, the teams using our engine, as junior teams.

“I don’t think you would like a Red Bull or a McLaren to be considered as a junior team of Renault. For us, it’s completely different. So to answer your question: We are not looking for another customer team, a team using our engine. It was important to have another team; we have that with McLaren, that’s done. And it was a good decision that we made last year.

“Some people criticised that decision, but I think it’s now clear that it was the right decision to make at the time.”

Abiteboul insists they are “100% comfortable” with McLaren. A pause, then he adds: “Then there is the different question, which is the question of a B team.

“What we are concerned is that it may become a necessity to have a B team, a junior team. That’s a problem, because we don’t have the prospect of running a B team or a junior team. I don’t see one being ready to accept that definition out there.

“That’s a real concern for us, and a concern that we have tried to engage with the FIA and Formula 1 on many, many occasions, six months. And so far there is still no very tangible demonstration that this is something that will be addressed.”

Does that not, though, leave Renault politically isolated, given that Ferrari and Mercedes could call on a voting block of three teams each, while Red Bull and Toro Rosso, both owned by the drinks company, have traditionally voted as block?

“Since two years (almost three) that I’m sitting in the Strategy Group (as observer) or F1 Commission I have never been part of a vote. There is no vote. So I don’t know what you mean by ‘politically’, but there is never any vote. There has never been a vote…”

What about the simple majority: 18 votes in the Strategy Group, split six each for the FIA and Liberty and one for each of the six participating teams?

“But what I do believe is, yes, in the first that you have mentioned, [namely] a sharing of ideas, of technology, of cost. And again, that will become much, much more important in the context of a cost cap. Because suddenly there is an incentive to share the costs of developing non-listed parts, or even listed parts. And that’s a real concern for us.”

I have one final question: Is Renault in discussions with Williams regarding engine supply?

“For the time being, absolutely no necessity to have any more dilution of our efforts.”

21 comments on “Abiteboul exclusive: Why a budget cap should be F1’s “number one priority””