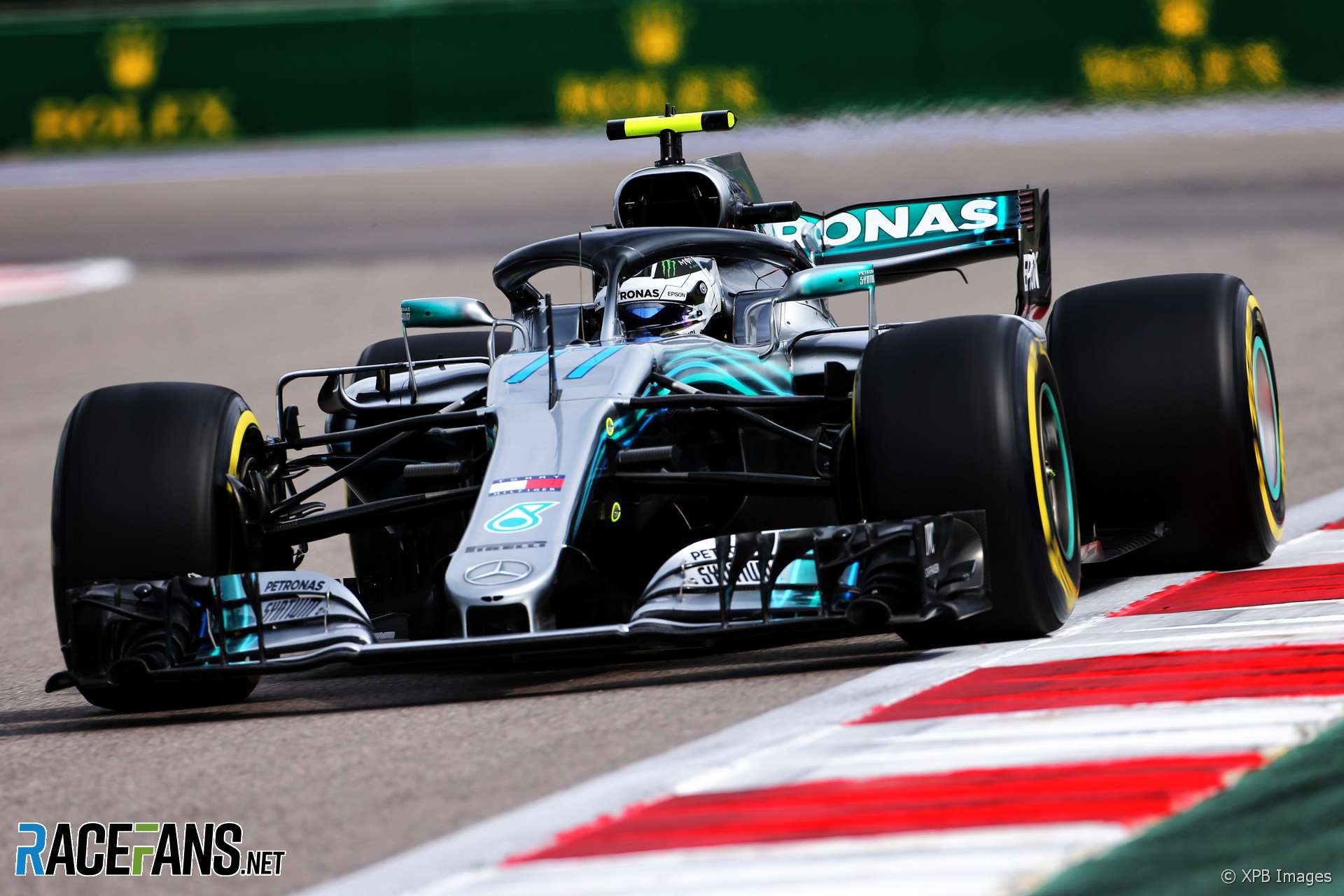 Valtteri Bottas denied Lewis Hamilton pole position for the Russian Grand Prix and led a Mercedes sweep of the front row of the grid.

The silver cars bumped the Ferrari pair back to the second row of the grid, over a half a second behind them.

Mercedes issued notice of their intentions in Q1 and Hamilton lowered the track record to 1’32.410 after a series of laps on his hyper-softs. Bottas backed him up at the top of the times sheet with the Red Bull pair separating them from the Ferraris.

Vettel was over a second slower, as Hamilton exploited the improving track conditions to press home his advantage. But despite this, none of the five drivers who were in the drop zone before the final runs began were able to escape it.

The Williams and McLaren drivers never looked in contention for a place in Q2 and so it proved. Fernando Alonso’s chances ended with a slow run through the first sector and Stoffel Vandoorne was unable to capitalise on the opportunity, taking 19th.

Sergey Sirotkin spun his Williams at the exit of turn eight which wrecked his hopes of progressing beyond the first stage in his home race.

The final driver to drop out in Q1 was Brendon Hartley, who had been consistently slower than his team mate by more than half a second.

The shoot-out for the 10 places in Q3 was non-existent. With the Red Bull drivers and Pierre Gasly doomed to start from the back of the grid anyway, only 12 of the 15 drivers had any reason to try to set a lap time. But Renault, who hadn’t looked like Q3 contenders anyway, decided not to run to assure themselves of a sixth-row start on fresh tyres.

While one-third of the field stayed in the pits, the rest of the drivers began their runs on the tyres they would start the race on. The Mercedes and Ferrari pairs opted for ultra-softs, allowing them to start the race on more favourable rubber.

The Sauber, Force India and Haas drivers joined them, all choosing the hyper-soft rubber. The second part of qualifying, however, was a damp squib.

The Mercedes drivers were strong in different parts of the lap at Sochi. Hamilton had the edge through the first sector on both of his runs in Q3, Bottas unable to get within two-tenths of him. But in the middle part of the lap number 77 was conclusively quicker.

Their first runs left Bottas ahead by a mere four-thousandths of a second. Ferrari weren’t in the hunt, the red cars still over half a second behind. As the final runs began it was between the Mercedes drivers.

Hamilton was quicker again in the first sector but at turn seven he caught a snap of oversteer and ran wide. With that his shot at pole position was gone, but Bottas pressed on regardless, extending his advantage to over a tenth of a second at the chequered flag.

Vettel reckoned he had no more than 15 hundredths of a second in his car after a mistake on his final run. It was still enough to out-qualify Raikkonen for third place.

Esteban Ocon and Charles Leclerc began their last efforts separated by six thousandths of a second in their fight to lead the third row of the grid. They didn’t improve with their last runs but a superb effort from Kevin Magnussen, who had been unhappy with his car yesterday, propelled him past both into fifth.