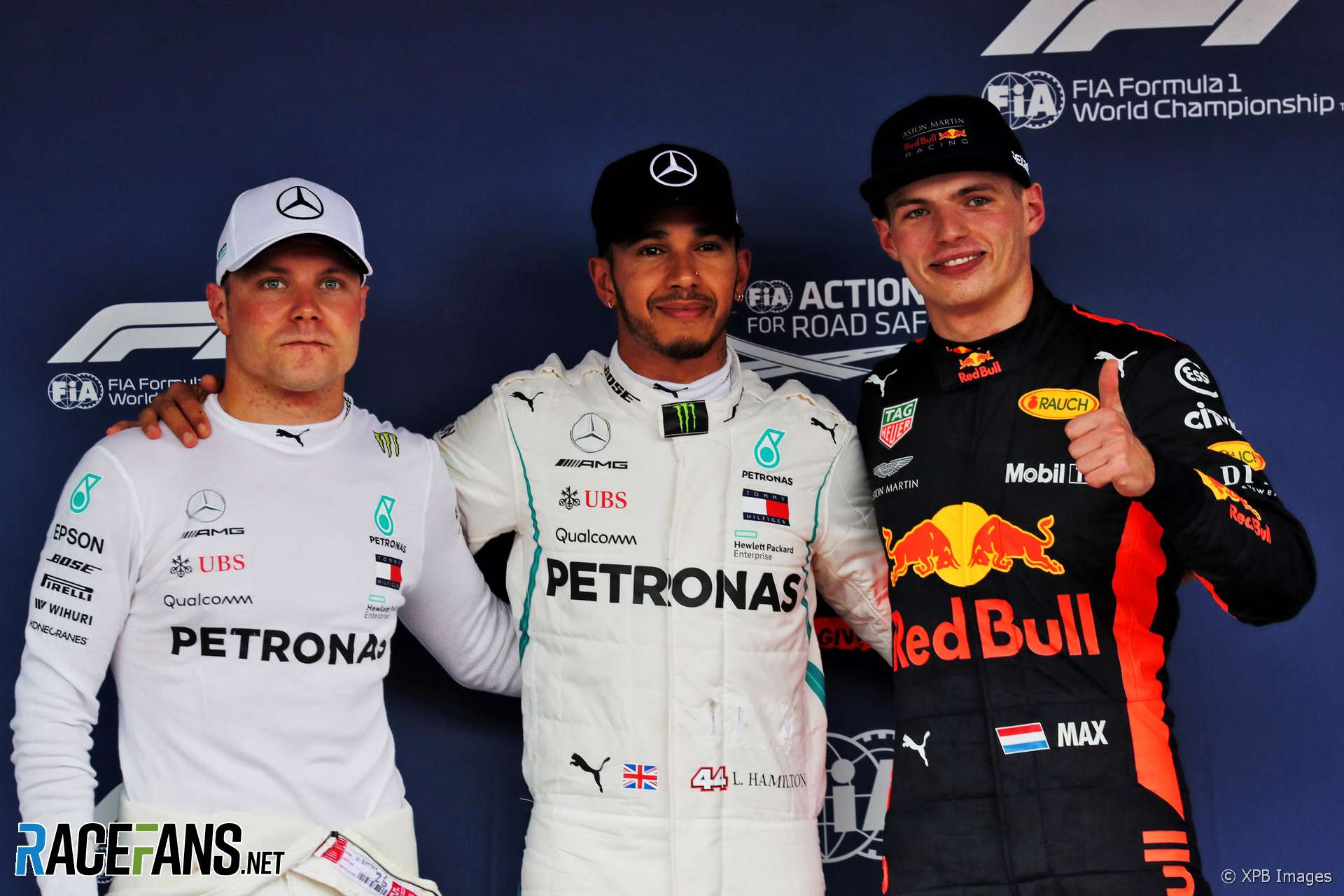 Lewis Hamilton grabbed his eighth pole position in qualifying for the Japanese Grand Prix but a slip-up in a wet Q3 left his championship rival Sebastian Vettel only ninth.

Mercedes swept the front row of the grid ahead of Max Verstappen and Kimi Raikkonen.

Most drivers had already set their first lap times when Marcus Ericsson lost control of his Sauber in the Dunlop and crashed, damaging his car and ending his session. The red flags flew while the Sauber was lifted away.

Before that Hamilton and Vettel had already exchanged lap times, Hamilton coming out ahead by three-tenths of a second. Vettel then had a quick spin at the hairpin, and rejoined just in time to be told the session was being stopped.

Sergio Perez was among those whose first run was disrupted by the stoppage, along with the Renault drivers. He moved up to eighth with his first effort, which left the McLaren and Williams drivers in the drop zone along with Ericsson.

Despite a light sprinkling of rain, the final runs produced drama. Nico Hulkenberg, whose participation in qualifying had been in doubt after he crashed in final practice, made a slight error at the hairpin. As he took the chequered flag he thought he’d set a quick enough time to secure a place in Q2, but he was in for a disappointment.

Lance Stroll briefly jumped up to 11th with an excellent final lap. Hulkenberg was soon hovering perilously close to the drop zone, which included his team mate. With his last effort Carlos Sainz Jnr grabbed a place in Q2 – but it came at the expense of his team mate.

While Fernando Alonso out-qualified Stoffel Vandoorne for the 17th time in as many races, the McLaren pair’s lack of pace left them last but for Ericsson’s crashed Sauber.

Mercedes selected the soft tyres for Q2 while Ferrari chose to start the race on super-softs. The harder tyre didn’t stop the silver cars from out-pacing their rivals – Bottas edging his team mate by just three hundredths of a second.

However one of the leading three cars didn’t reach Q3. Daniel Ricciardo suffered another power-related problem in his Red Bull, running Renault’s latest C-spec engine, and was unable to set a time.

That, plus a late shower which prevented further improvements, helped Toro Rosso get both their Honda-powered cars into Q3 at the manufacturer’s home track. The rain thwarted Charles Leclerc, who having been sixth in Q1 spun at the Degner curves in Q2 as he missed the cut in 11th.

Between him and Ricciardo were the other three eliminated drivers. Kevin Magnussen failed to join Romain Grosjean in Q3, while Sainz and Stroll had already left their team mates behind.

The rain stopped before the start of Q3 but Ferrari were concerned about the state of the track and sent both cars out on intermediates. The rest of the field opted for super-softs and it immediately became clear Ferrari had made a mistake.

They paid a high price for it. While Hamilton banged in a lap of 1’27.760 on a mostly dry track, by the time the Ferrrais began their runs on super-softs the rain was back.

Raikkonen was the first of the two to start his lap. At Spoon the track was slightly damp and he slithered wide, but was still quick enough to claim a place on the second row.

Vettel hit the same damp patch at Spoon and went even wider, ruining his lap. At the line he was only quicker than Sergio Perez’s badly-delayed Force India.

With the rain growing heavier, Vettel had no further chance to improve, and ran off the track at Degner in the growing shower. Bottas claimed second on the grid and Verstappen grabbed his chance to take third place for Red Bull.

Romain Grosjean led the midfielders in fifth with the Honda=powered Toro Rosso pair next, Brendon Hartley ahead of Pierre Gasly.

145 comments on “Hamilton on pole, Vettel ninth after rain in qualifying”