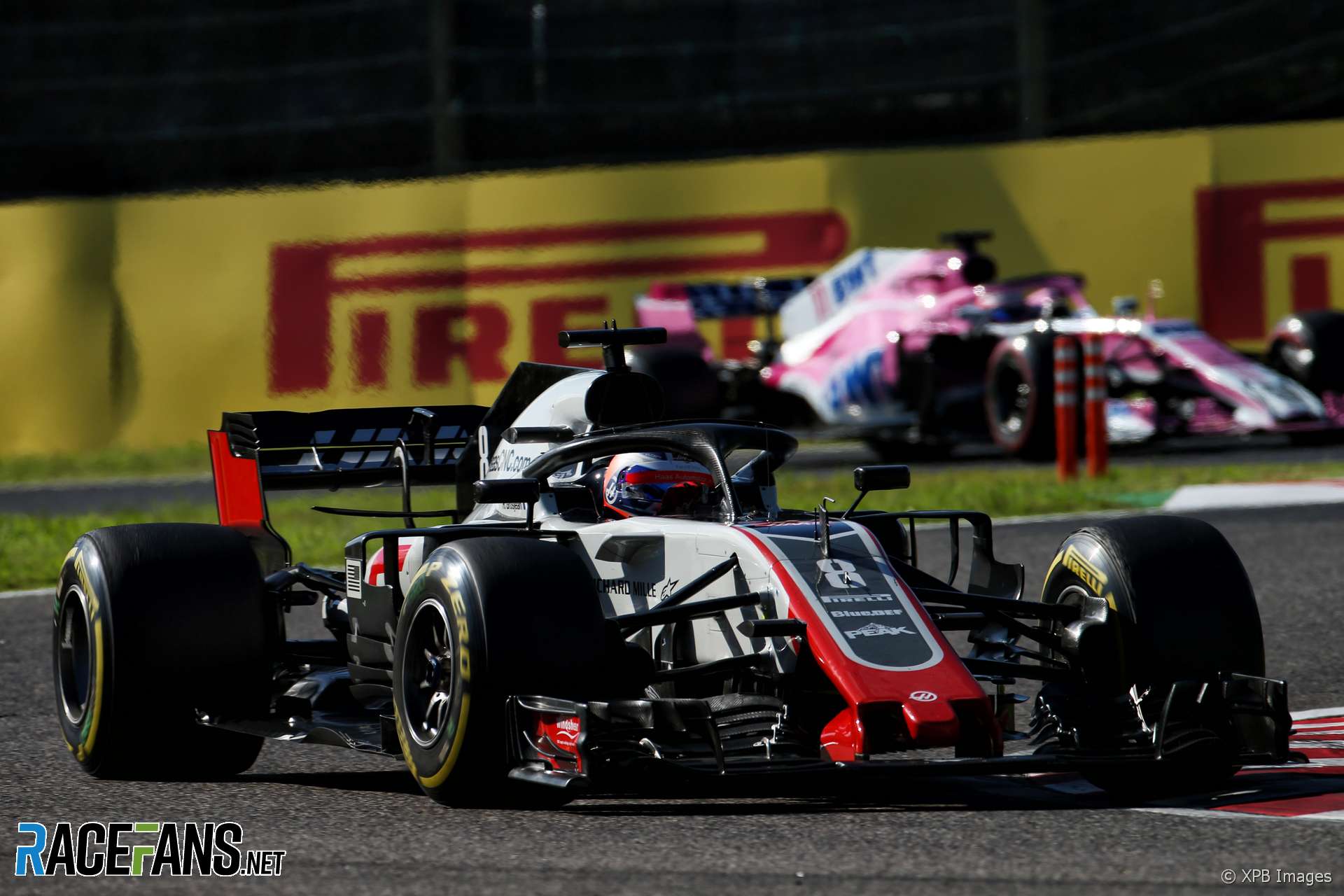 Grosjean was stunned by his rival’s move and accused the Force India driver of jumping the restart on lap 41. He had been over two seconds ahead of Perez before the VSC period, which was triggered when Charles Leclerc stopped his Sauber at the side of the track.

The VSC period began as Grosjean and Perez were beginning the lap. During a VSC period drivers are given a target lap time around 30% slower than a normal race lap. Perez was able to get a run on Grosjean by exploiting how that reference time is measured.

For timing purposes each circuit is divided into marshalling sectors, of which there are 30 at Suzuka. How close the drivers are to the VSC lap time is measured every 50 metres.

To ensure drivers don’t lap significantly quicker than the VSC lap time they are required to be slower than (‘positive to’) the reference time at least once in each marshalling sector. However in the rest of that sector they can be quicker than (‘negative to’) it.

Perez exploited that opportunity by going from ‘positive’ to ‘negative’ just as the VSC period was ending, which brought him onto Grosjean’s tail. Perez’s race engineer Tim Wright kept him abreast of the progress marshals were making in moving Leclerc’s car, and therefore how soon the VSC was likely to end.

“This could be a short one,” Wright advised Perez as he entered marshalling sector 10. “Positive plus 3.5, they are moving the car.” As he rounded Dunlop, Perez was told “VSC ending soon” and he began to close the gap to Grosjean.

“Stay positive, stay positive,” Wright urged as Perez took lengths out of the Haas in front of him. With a bit of luck, the VSC period ended just as they were approaching Degner two, allowing Perez to carry the advantage of his extra speed and close on Grosjean as they approached the hairpin.

He took a look down the inside of the Haas as they rounded the corner. A shocked Grosjean saw the pink Force India looming in his mirrors. “Mate he’s jumped the restart,” exclaimed Grosjean, “he’s in my arse.”

“Passed on, understood,” answered Grosjean’s engineer Gary Gannon. As they accelerated up to Spoon both drivers had their engines turned up. But Grosjean had another problem: he was on the medium tyres, which he’d been struggling with before the VSC period due to his tyre sensors not working, while Perez’s softs were coming up to temperature more quickly.

“He cheated,” insisted an unimpressed Grosjean as they rounded 130R and Perez teed him up for a pass. The Force India dived down the outside at the chicane and was through into seventh place.

“Mate this is not possible I was plus 0.3,” fumed Grosjean. “He has got to give me the position.” But he didn’t, and afterwards Grosjean admitted the team would look closely at what happened.

“We need to analyse what happened with the Virtual Safety Car restart,” he said. “I was right on my delta time and Perez, when the gap was 2.4 seconds before, overtook me straight away.

“We need to check and see if there is not a problem in the system there. I thought I had done the job on my side. We did our best.”

Perez, of course, was not giving anything away about how he had grabbed the ‘class B win’: “At the restart with the Virtual Safety Car I managed to get really close to Grosjean and just when I saw the opportunity I went for it.”

100 comments on ““He cheated!” How Perez mugged Grosjean at the VSC restart”