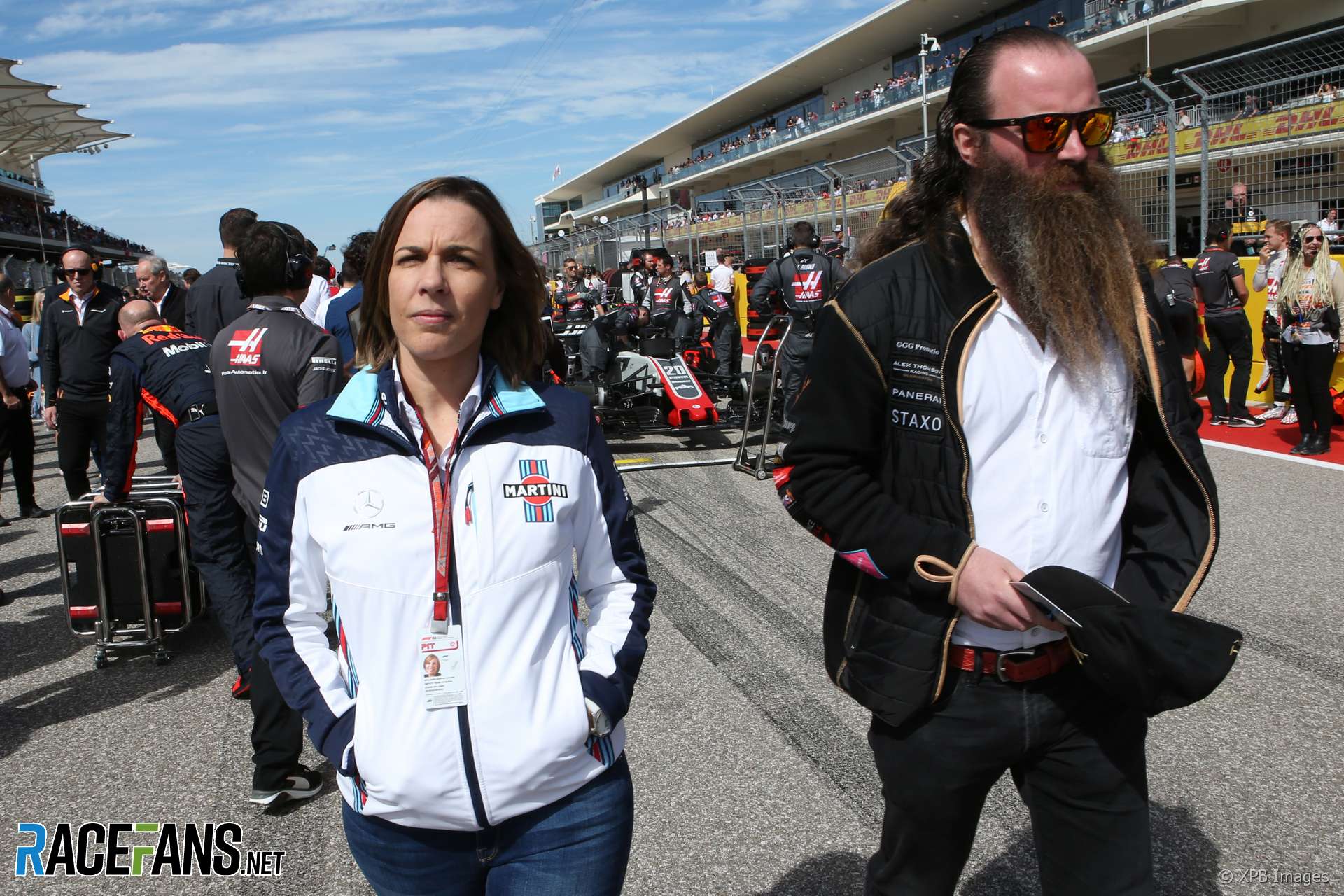 Are Williams about to land a new sponsorship deal with a beverage producer? Two different names were linked to the team in Austin, as @DieterRencken explains in his final United States Grand Prix Paddock Diary.

I sleep an hour longer due to having gotten to bed later than planned last night, what with time-shifted qualifying. The Sunday papers are out, plus I have some queries from editor Keith to sort, so it’s 7am before I’m properly up and about.

Coffee with my host Forrest Bond – we catch up on yesterday’s happenings and swap some pleasant anecdotes about various mutual acquaintances I’ve seen here in Austin, then I prepare for the day, ready for departure at 9am.

Arrive at COTA, having breakfasted en route – a couple of McMuffins taken with coffee – and catch the media shuttle. I have a few meetings planned, with both teams and some media colleagues, including having a chat with Tony Dodgins, editor of Autocourse, about a commission for a feature in this year’s edition of the annual.

I’m deeply proud of writing for motor racing’s definitive annual, for it was my staple present for many consecutive Christmases, albeit belated due to shipping delays to South Africa. Never did I dare dream that one day I’d be published in of Autocourse, let alone for five years. Thanks guys, appreciate it.

I can’t divulge the topic, but needless to say I’m extremely excited about it, and it means a very busy Mexico due to the number of folk I need to interview for the feature. 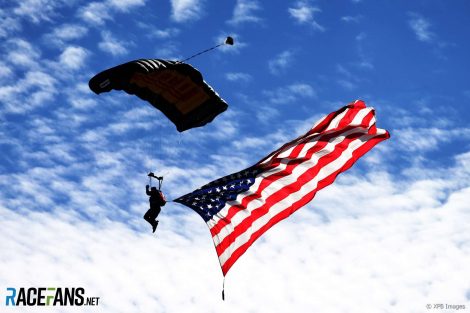 By the time my meetings are sorted it’s around an hour before the race, so I wander the paddock catching up on gossip while whiling away time. I’d heard a rumour that Williams could benefit from BWT sponsorship next year given that Force India’s new owners are likely to attract their own deals, but, from what I glean, it’s just that – a rumour.

Planning a grand prix weekend was more straightforwards when sessions tended to be held at regular times. Save for a few exceptional events such as Singapore and the Middle Easterns, qualifying was generally at 2pm, grand prix start exactly 24 hours later and pit lane open 30 minutes before the start.

Contrast that with this race: qualifying at 4pm, race at 1:10pm, and pit lane opening 40 minutes beforehand (the extra time ostensibly providing additional media access). I’m not sure this complexity is helping fans follow the sport any more than those working in it. 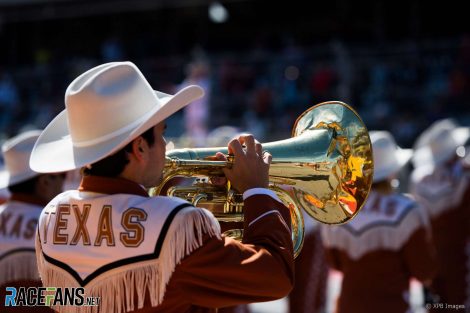 On the grid there’s no repeat of last year’s pre-race razzmatazz. In 2017 boxing announcer Michael “get ready to rumble” Buffer called the pre-start, introducing drivers by corny nicknames (Ricky Rocket, Dany Torpedoooo) before corrupting that famous motor racing phrase into: “Gentlemen, start your engines – and let’s get ready to rumble.”

While walking the grid I spy Liberty top man John Malone making earnest attempts at understanding the business he acquired for eight billion bucks. Happily one lesson appears to be not repeating this cringe-worthy exercise. Though it had its defenders, among them Lewis Hamilton.

I spot Claire Williams walking the distinctively-bearded William Storey, Rich Energy’s who-knows-what, towards the sharp end of the grid. Having failed to cut a deal with Force India, both pre- and post-administration, I guess he’s working his way down the grid in search of an outfit willing to display his elusive brand.

Although their website proffers limited edition two-can boxes for 200 quid or entire pallets of 2,500 cans for two grand, I can’t think I’ve ever seen a can on sale.

Back in the Media Centre, FanVision hooked up for the race. All in, the USGP turns out to be one of the season’s better races, with Kimi Raikkonen thoroughly deserving his first win in five-and-a-half years. Possibly Ferrari should simply have fired him before every race if this is how reacts when dumped. 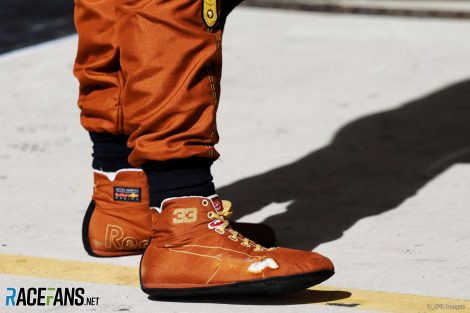 Head for interview sessions: two Toro Rosso drivers; Christian Horner, whose media debriefs are dependably the most revealing of all team boss sessions; Charlie Whiting – plenty to talk about given the number of incidents – and Hamilton, who once again impresses me with the depth and breadth of his answers despite the despair of defeat.

Horner’s drivers were kitted out in suitable Texan-themed racewear on Sunday. But Max Verstappen committed every eight-year-old’s crime of spoiling his new shoes the first time he wore them while conjuring up another superb recovery drive from 18th to second.

Hit the road to New Braunfels. Exiting the parking lot is a breeze – thank you for keeping the punters occupied, Britney – and traffic heading south heavyish but flowing at 70mph. I reach Forrest’s house within the hour. 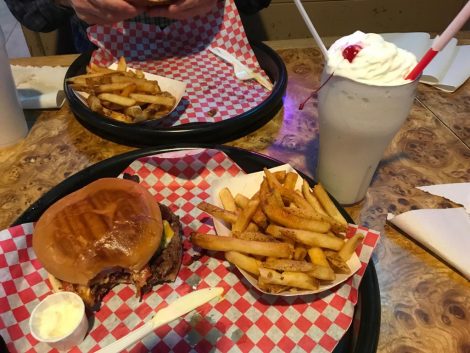 We head to TJ’s Burgers, a traditionally-furnished gourmet burger bar we frequent whenever I’m in town. The recipe is simple: they grill your (ginormous) patty to taste and serve with a toasted bun, leaving the diner to build a combination burger to taste by dipping into the full spread of trimmings and condiments. TJ’s burgers rank up there with the very best I’ve tasted, and the hand-dipped milkshakes are to die for…

But I politely decline the day’s special: The Big Beast Burger: two pounds of certified Angus beef patty served on a toasted homemade bun, with your choice of sides.

We’re back home, and its turn-in time in keeping with my time-shift strategy. Tuesday I head for Mexico and yet another round. Let’s see whether Hamilton can repeat his 2017 title win at the Autodromo Hermanos Rodriguez. Talk to you from there.