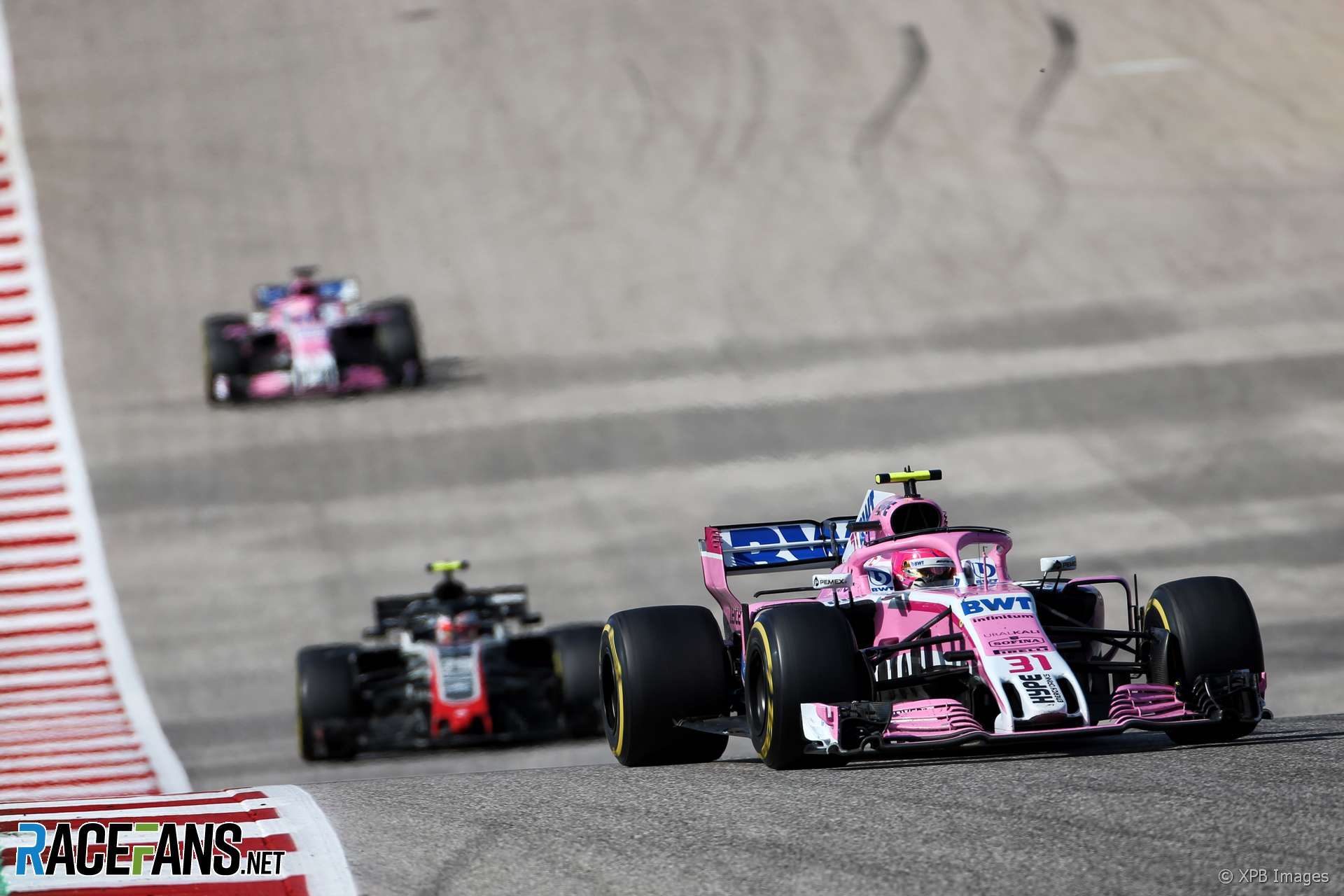 Formula 1’s V6 hybrid turbo era got off to an unpromising start four years ago when Daniel Ricciardo was disqualified from the 2014 Australian Grand Prix for exceeding the newly-introduced fuel flow limit.

Concerns the rule might prompt a wave of further disqualifications as teams grappled with the new technology proved misplaced. No further drivers were disqualified under the same regulation.

Until last weekend, when Esteban Ocon was stripped of eighth place at Austin for breaking the same rule. Remarkably the driver who initially inherited his position, Kevin Magnussen, was then also disqualified for a fuel irregularity.

How has F1 gone for so long without a disqualification of this kind and then suffered two in the same race? It appears to be a coincidence.

Magnussen’s disqualification is the more straightforward of the two. He did not exceed the limit on fuel flow, rather the restriction on how much fuel drivers can use during a race. This is set at 105 kilograms.

FIA race director Charlie Whiting confirmed Magnussen only exceeded the limit on the final lap of the race. Magnussen leant hard on his fuel load early in proceedings as he tried first to get ahead of Sergio Perez, which he managed, then to jump Ocon, which he did not.

Soon afterwards his race engineer began urging him to “lift-and-coast” though at first this was just to “drop our tyre temperature”. Later in the races Magnussen received more urgent instructions to save fuel:

Magnussen’s plight worsened as race leader Kimi Raikkonen did not lap him before the end of the race. Had that happened, Magnussen would not have needed to complete the final lap, and wouldn’t have exceeded the 105kg limit.

Normally when a racing car uses too much fuel it gives a telling signal that even the newest racing fan can comprehend: Its wheels stop turning. But F1’s rules make it possible for a driver to use too much fuel without running out of it.

The 105kg fuel limit applies “from the time at which the signal to start the race is given to the time each car crosses the line after the end-of-race signal has been given.” Therefore Magnussen had enough fuel to finish the race, complete a victory lap and give a post-race fuel sample – then be disqualified.

Haas team principal Guenther Steiner was scathing about the effect F1’s fuel rules have on the racing. “With a refuel race we could have had such a good fight between us and the Force Indias because they had to fuel-save as well, it’s the same for everybody.”

The maximum fuel allocation will be increased to 110kg for the 2019 F1 season. “I hope with the regulation next year that means we can race, without always saying we have to lift, lift, lift. Are we getting lapped, are we not getting lapped, it depends how fast we can go.

“We want a good show but then make sure you put a regulation [so] that you don’t get one.”

A Virtual Safety Car period earlier in the race gave Magnussen and the other drivers a chance to save fuel. Whiting said Magnussen’s violation was “really hard to understand”.

“I don’t quite understand how you can go over because you’ve got warnings on the dash. What the fuel flow is measuring is being shown precisely on the dashboard every minute of every lap if you want it, and it’s colour-coded and all this sort of thing. I believe he was being told to save fuel quite often in the race as well.”

This is the second time this year one of the Haas cars has been disqualified: Romain Grosjean was thrown out of the Italian Grand Prix for a floor infringement. On that occasion Haas was swift to announce an appeal but none has been forthcoming for Magnussen. The rules clearly state that “other than in cases of force majeure (accepted as such by the stewards), any driver exceeding this limit will be disqualified from the race results.”

While Magnussen fell foul of the rules on the final lap, Ocon’s violation came at the start of the race. He was found to have exceeded the peak fuel mass flow rate of 100kg per hour during the first lap of the race. This is the same rule Ricciardo transgressed in 2014.

Force India team principal Otmar Szafnauer admitted there had been a “spike” in Ocon’s fuel flow rate during the first lap but that over the whole lap he was compliant with the 100kg/hour limit.

“It was a spike and then a trough and you look at it over one lap, it’s the only time it happened, it was neutral. We were maybe even a little worse off because it took a long time to recalculate.”

Whiting admitted he wasn’t sure how this had come about but indicated Ocon was over the limit “for a large part of the first lap.”

“I’ve no idea how that can happen. It seemed to then right itself. Whether it was a setting the team had forgotten to make, I don’t know.”

Force India has also not indicated it will appeal. However Szafnauer believes the case is “unprecedented” and said Ocon, who fell behind both Renault drivers on the first lap of the race, did not gain an advantage from being over the fuel flow limit.

While that reasoning is often used for sporting decisions, it tends not to be the case when it comes to complying with the technical rules. But these latest disqualifications are unlikely to win F1’s contentious hybrid turbo power units any new fans.

“It’s like you want to drive fast but save fuel,” Steiner grumbled. “It’s called racing, no? If you want to fuel-save, you do something else.”