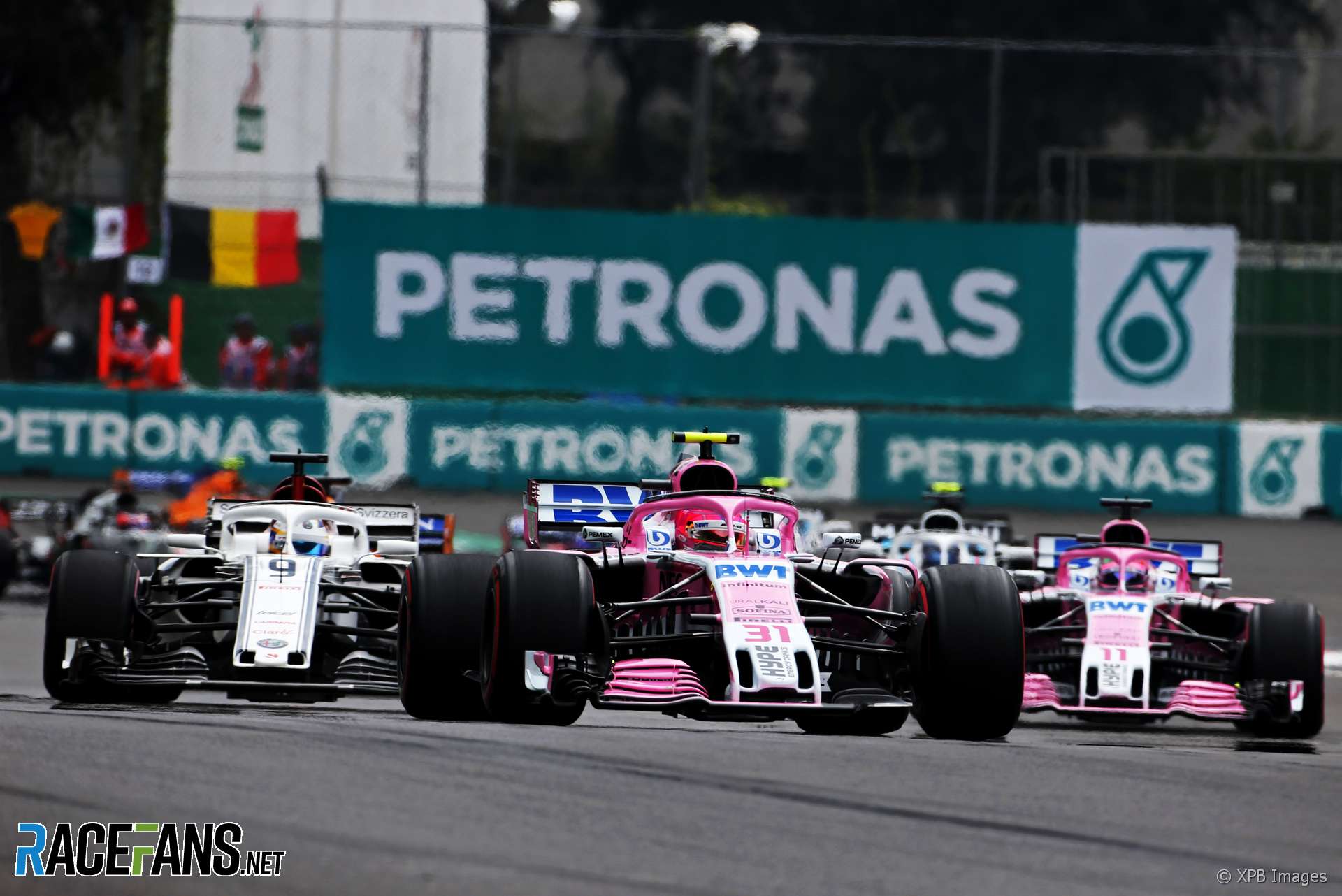 Two laps. That’s how far the leading cars from the ‘big three’ Formula 1 teams were ahead of their ‘Formula 1.5’ rivals from the other seven outfits in Mexico.

Will the sport’s owners Liberty Media ever manage to create a level playing field for its competitors? Ambitious changes were planned for 2021, but they seem increasingly unlikely to be realised.

Yet the signs are the sport will once again back itself into a corner, then be forced into accepting the worst possible compromises on all fronts, or delay change for another year (or more), thus extending the current status quo until at least 2022.

Which would be equally damaging, though (hopefully) only temporarily.

The tyre situation provides a microcosm of the situation. As revealed in July, the FIA issued (legally binding) tenders for tyre supply for 2020-3, with current 13-inch dimensions retained for 2020, and 18-inch wheels specified thereafter. The existing contract illustrates just how out of kilter are some of F1’s covenants: Since 2013 it had been known that the current regulations expired in 2020, yet a tyre contract ending in 2019 was issued.

Of course, the fine print is likely to contain get-out clauses, but one wonders how either of the shortlisted applicants – incumbent Pirelli and optimistic hopeful Hankook – would feel about discovering that 13-inch rubber is being retained for an extra year should an extension be agreed upon, with 18-inch development cost then being amortised over just two seasons? It could happen.

Asked in Mexico by RaceFans as to its ideal lead times for the development of 18-inch tyres – assuming the tender goes Pirelli’s way, which seems the most likely outcome – the Italian brand’s sporting director Mario Isola said they would need to commence with design immediately after the verdict.

“It’s a big change, so we need to start working as soon as possible. It’s not only about the renewal of the contract that as you know is an on-going (commercial) discussions with (commercial rights holder) FOM,” he said, “but once we have the confirmation we need to understand which is the technical regulations for 2021.”

Although Pirelli had previously undertaken concept work on 18-inch tyres ahead of the aborted (2016) change, Isola says, “It is different because we [now] have different sizes. The [contact] area is much, much wider, so we have to redesign everything, but we missed [some] very, very important information, [and] that is the technical regulation.

“Without the technical regulation and without knowing the expected performance of the 2021 cars it’s difficult to design a tyre. It’s not only about the renewal of the contract that as you know is an ongoing discussion with FOM, but once we have the confirmation, we need to understand which is the technical regulations for 2021.”

Asked whether about Pirelli’s experience from sports car racing was beneficial, Isola said: “It’s helpful because we have two elements: They are going to ban blankets, [and] we have experience on racing where they don’t use blankets and 18 inches.

Isola reckons they would need to test for a little over a year in advance of the first race, meaning the 2021 technical regulations would need to be finalised within the next 12 months.

“But,” says Isola, “the other problem is: ‘do we have any car available?’ I don’t have an answer for that. The problem is that is that probably they have to redesign suspension, travel of the suspension because with a smaller sidewall you have to compensate [for sidewall elasticity], so there are a lot of open points. As soon as we have a confirmation or not [on the tender] we will start working on all this.”

Now consider that it has taken F1 almost a year to not agree whether to ditch the MGU-H, or whether to relax fuel flow from 2021 – both of which affect torque, and thus tyre stresses – while aerodynamic platforms and chassis concepts are far from being agreed by the Technical Working Group let alone formally approved by Strategy Group or F1 Commission, and it is evident time is becoming increasingly tight.

Furthermore Pirelli, or whichever tyre supplier gets the nod, requires a representative F1 car by the end of 2019 to start testing; equally, F1’s agreements specify two-year lead times for major changes, which a switch to 18-inch tyres surely qualifies as, given the radical suspension and resultant geometry changes. Consider the impact on braking: it makes little sense to “grow” wheels five inches in diameter, yet retain existing brake disc sizes. Then consider the bashing wheels and suspension will endure with no ‘give’ in the sidewalls.

Yet, intriguingly, based on team reaction at the time, it seems the technical requirements outlined in the tyre tender were decided unilaterally by the FIA without Strategy Group or F1 Commission votes, which suggests that the FIA is going it alone (or possibly with FOM input) on post-2020 regulations changes. In that case, could there be a challenge from the major teams aimed at delaying matters?

Consider the impact of budget caps, equitable revenue structure and democratic regulatory process on the likes of Mercedes and Ferrari. If you were in their shoes, would you willingly accept such swingeing changes or fight to retain the status quo, regardless of the long-term effects on the sport? Already Mercedes is suggesting a reduction from 21 to 15 races per year, while Ferrari has variously threatened to exit the sport.

Don’t be surprised if they push for a stay on the current regulations and structures. Indeed, their starting point is likely to be budget caps: Where the plan had been to introduce $150m (with certain exemptions) budget caps from 2021, they argued – seemingly successfully – for a $200m/$175m/$150m glide path, with the next step being for a greater slice of F1’s revenues.

Already there is talk that the major teams are pushing for an increase in F1’s slice of the ‘pot’ from an effective 66% to 75% – to enable the majors to retain their levels of income while increasing payments to the rest. Understandably Liberty is baulking at that, but how will it end? A walk-out by Mercedes or Ferrari? A breakaway series? Both parties are likely to accept the current status quo rather than risk fragmentation.

Consider comments made by Mercedes F1 CEO Toto Wolff in Austin: “Of course we’d like the sport to grow on the EBITDA level because it means team payments grow.

“We recognise the challenges they face, and I think next year might be a different story and we’d like to be supportive where we can in order to grow the underlying profit because it’s where we’re taking a share of.”

“I think we’d like to see revenue growing and the underlying profit growing,” he added. “But, equally, a long-term strategy…”

Do these sound like the comments of a manufacturer team willing to accept cost cuts?

Complicating the situation is that a group of F1 shareholders asked some uncomfortable (and pointed) questions about Liberty’s financial performance in Austin, visiting team owners and (other stakeholders) to obtain their impressions and opinions of the situation. F1’s revenues have dropped for two consecutive quarters, and the much-vaunted F1 TV Pro revenue spinner is far from washing its face.

Indeed, according to multiple sources, some of the discussion points centred on the competence of the F1’s current executives, and whether they were up to the task of resetting and growing the sport after a decade of exploitation by private ‘investment’ fund CVC Capital Partners. That does not bode well for F1’s post-2020 commercial discussions, and ties in with the sentiments of the investment expert who spoke to this column last week.

In Mexico two team boss meetings were held. One, ‘Coffee with Chase [Carey, F1 CEO]’ on Saturday, lasted 30 minutes, with a source saying “We discussed the reasons for Miami’s [race] demise for ten minutes, that they’ll announce Hanoi for 2020 shortly, and that a race in Las Vegas could work – why he doesn’t just go ahead and do it instead of talking about it beats me.

Asked to confirm the meeting, another team boss said: “You know the story about Nero and Rome…”

Against that background, it seems increasingly unlikely that F1 will have its sporting, technical, regulatory and commercial ducks in a row by end-2019 – in time for a 2021 reset – particularly as there does not seem to be much appetite amongst major teams to forfeit their advantages as bestowed by CVC.

After all, which entity willingly waves goodbye upwards of $100m per annum – and forget not that Ferrari and Mercedes are owned by PLCs, while Red Bull Racing is owned by a hard-nosed entrepreneur who built the company into a global energy drink player within a decade of starting out.

However, let us (optimistically) assume that F1 gets it act together in good time and levels the notional playing field for 2021 by redistributing F1’s wealth and introducing budget caps – does that mean that all things will once again be equitable (note: not equal)?

Not according to a multitude of bosses of independent teams, asked in Mexico whether a reset would immediately give them all chance. Not according to Sauber’s Frédéric Vasseur, who believes the major teams will be able to live off the proceeds of their fat years for seasons to come.

“Even if you introduce a cost cap in 2021 or [whenever], it doesn’t matter,” he said, “I think they invested so much on the technical side that it will be quite impossible for us to close the gap immediately. But I think we would have some advantages – we are used to dealing with this kind of budget and they are not, and probably at one stage it could be an advantage.

“But on the first part of the deal, they will capitalise on the advantages they made,” added Vasseur, making a point later echoed by Guenther Steiner of Haas.

Franz Tost, team principal of Toro Rosso, the budget operation within the Red Bull family, sees it similarly, but added another factor: “Because the top teams can invest as much as they want during 2020 for developing the car for 2021, and once they have this big advantage it’s difficult for the other teams to catch up.

“It depends now with which regulation the FIA will come up. If they really minimise the development and if standard parts are being used, then maybe the gap will be closed earlier. Otherwise it will take until ’23, ’24, something like this, because the real cost cap is coming in ’23. The rest is just a gradient which is coming down. We will see. Depends on the regulations once more.”

The message is: Despite having had almost six year to prepare for a total reset of a sport whose TV eyeballs and revenues show a worrying downward trend regardless of what cleverly crafted media releases may suggest, the indications are that F1 is once again prepared to go to the brink before blinking – hopefully before it’s too late – and in the process expending energies that would be better deployed constructively.

It is not yet too late, but very soon threatens to be.