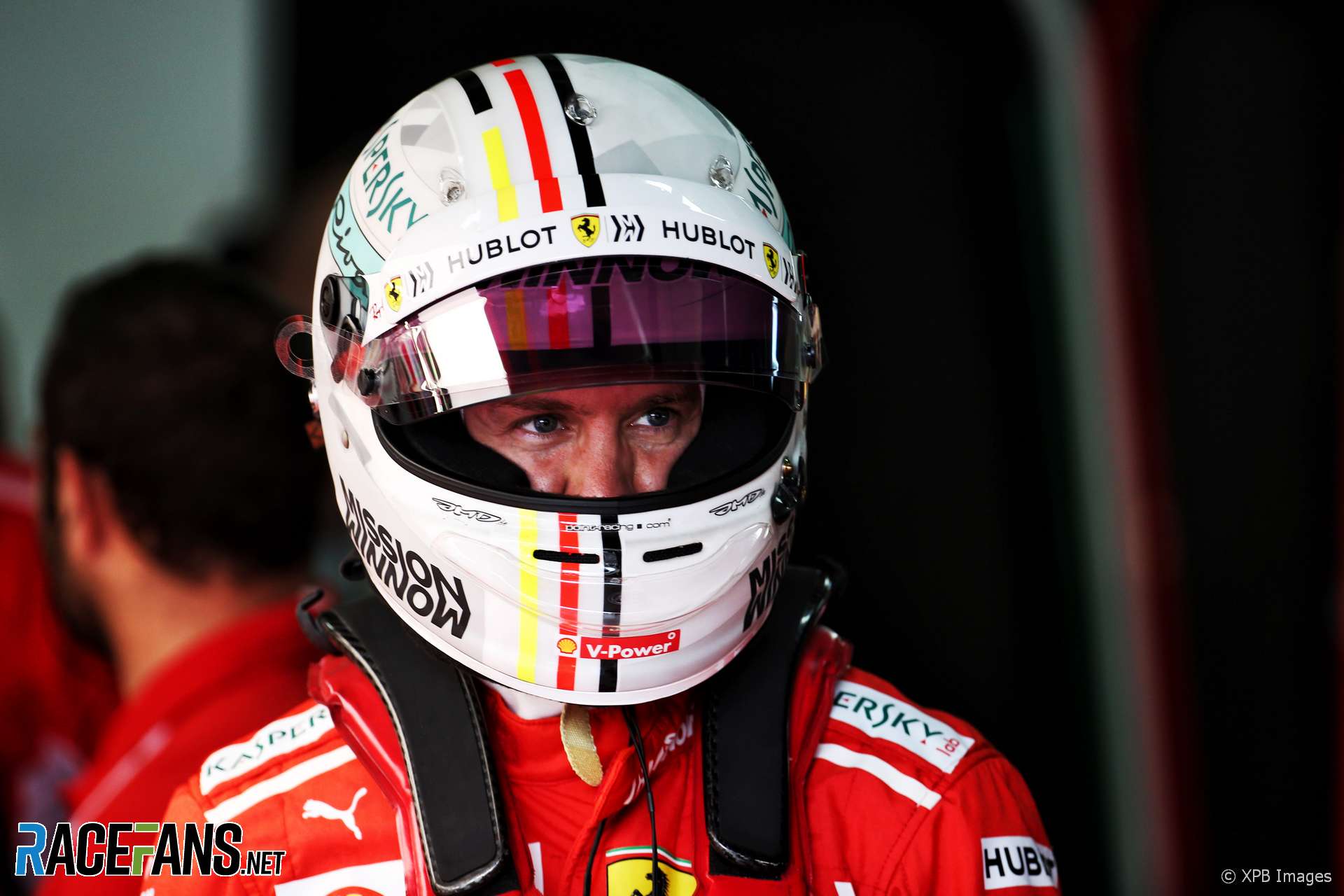 Sebastian Vettel has been given a reprimand for the Brazilian Grand Prix after damaging a set of scales at the weigh bridge during the session.

The stewards ruled Vettel did not break article 29.1 (a) (i) of the Sporting Regulations which requires drivers to pull into the FIA garage area and turn their engines off when summoned to the weighbridge. “The driver both stopped at the FIA garage and eventually stopped the engine,” the stewards noted, “although not at the time usually expected in the established procedure.”

“A weight was obtained,” they added.

Vettel then used his car’s MGU-K to restart its engine and drove away, which the stewards noted “is not the procedure because it can damage the scales, which in this case he did.” Although no one was hurt, and the stewards ruled Vettel’s driving was not “reckless”, they found he caused a “potentially dangerous situation” and failed to follow the officials’ instructions.

He has been given a non-driving reprimand – his first of any kind for him this year – and fined €25,000.

The stewards reviewed the video evidence from the on-board camera and pit lane CCTV, viewed team engine telemetry and heard from the driver of car 5 (Sebastian Vettel) and team representative.

The Stewards first considered whether there was a breach of Article 29.1.a.i. As the driver both stopped at the FIA Garage and eventually stopped the engine, although not at the time usually expected in the established procedure, and a weight was obtained, these elements satisfy the requirements of the regulation and therefore the stewards find no breach of this article.

Nevertheless, the officials give directions to the drivers at the scales in order for the weighing procedure to be accomplished in an orderly and safe way, without the possibility of damaging the scales.

The stewards observed that the driver did not stop the engine at the time he was directed by the official at the scales, knocked over the cone placed to stop the driver from driving onto the scales, which he then did. At the time he was being shown a sign to have his “Brakes On” by an official that was standing in front of the car, and while not hitting the official did force him out of the way while driving onto the scales. He then turned off the engine.

Once the weight was taken he then did not wait for the officials to push the car off the scales, and while the Stewards accept that he may have mis-understood the indication from the official, he then re-fired the car and drove off the scales, which is not the procedure because it can damage the scales, which in this case he did. While no one was hurt by the scales being thrown out from behind the car, and while the Stewards accept that the driver did not drive off the scales in a reckless manner, the procedure is established exactly to prevent damage to the scales or a potentially dangerous situation, which is exactly what was caused.

The stewards found that the driver failed to follow the instructions of the relevant officials for the safe and orderly conduct of the Event and order a Reprimand (Non-driving) and a fine of €25,000. Competitors are reminded that they have the right to appeal the decisions of the Stewards (with the exception of those referred to in Article 12.2.4 of the FIA International Sporting Code), in accordance with Article 15 of the FIA International Sporting Code and Article 9.1.1 of the FIA Judicial and Disciplinary Rules, within the applicable time limits.

47 comments on “Vettel given reprimand for weighbridge incident”