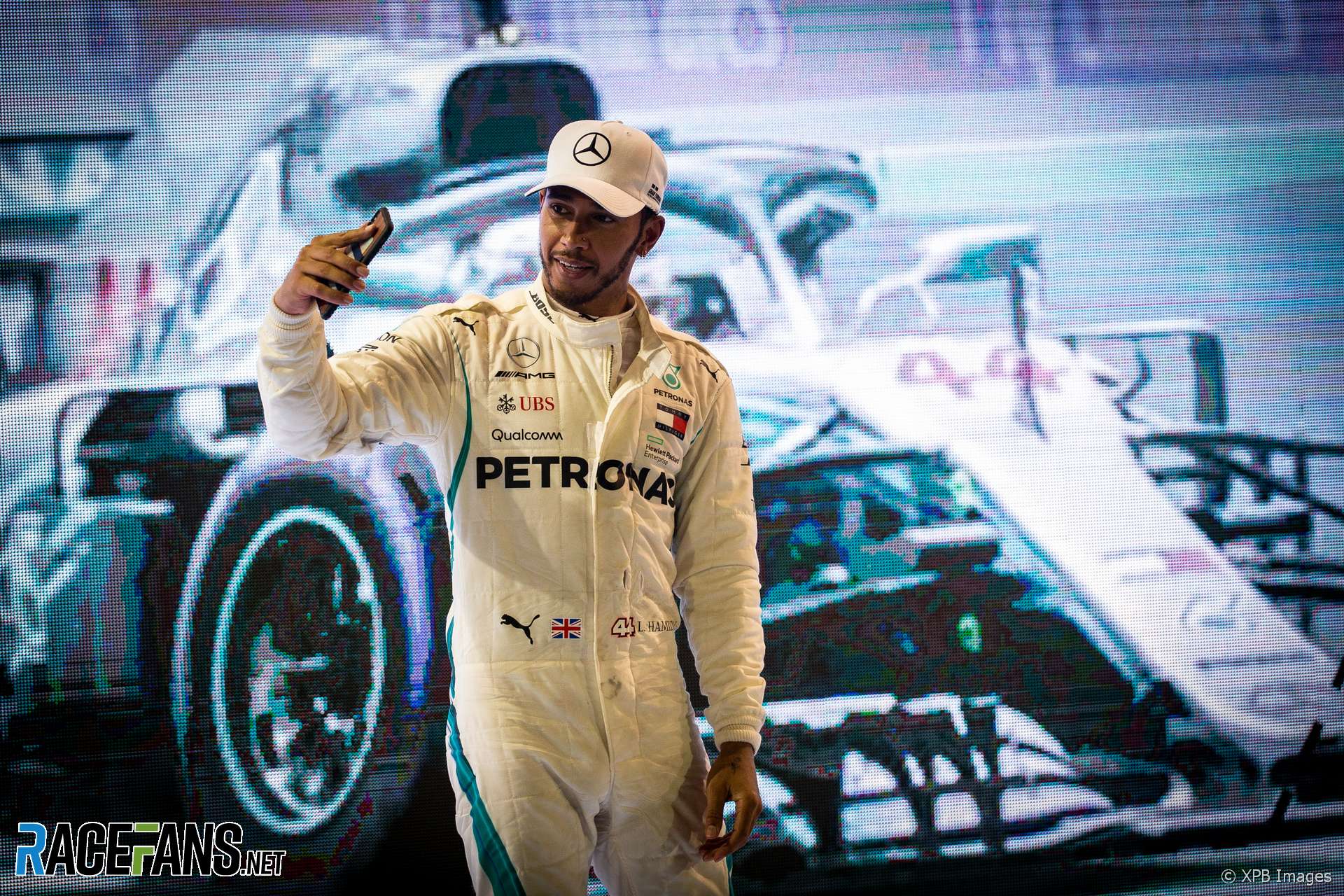 Formula 1 put on a spectacular show as Lewis Hamilton clinched his 11th win of the year. But behind the scenes ructions over Haas’s protest against Force India continued.

Another late-ish lie-in: I could get used to these lazy mornings. However, being the final day of the last race of the season, I need to get to the circuit and catch the early birds in order to have material ‘in the can’ for the off-season. So I’m packed and ready to leave by 10:30am, and at the circuit 30 minutes later.

On arrival I grab a salad ciabatta with turkey – taken with coffee, in the media restaurant – then hit the paddock.

After collecting material for upcoming features, I receive notice that Liberty, the FIA and Pirelli will announce the 2020-23 tyre supply contract, as we revealed on Saturday. The good news is that F1 is moving to 18-inch, low profile rubber, but here’s hoping the ‘target letter’ – which outlines the sporting and technical objectives of the contract – provides sufficient scope for Pirelli to supply tyres that permit racing. 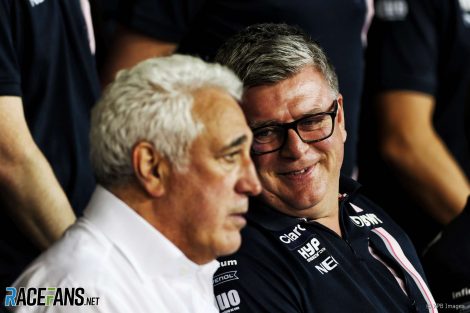 The Pirelli reveal – but I’ve observed something more intriguing: F1 CEO Chase Carey and FIA President Jean Todt exit the control tower administration block with a stern-faced Lawrence Stroll, new owner of Force India, in tow. Clearly the three gents have just a left a meeting about the Haas affair, which holds serious implications for all three parties. Oh, to have been a fly on the wall.

Lunch at Mercedes: starter is a mixed salad platter – avocado/beef and chicken/pineapple – followed by a main of teriyaki salmon on rice served with Asian vegetable. I finish off with fruit salad, but still have a hankering for ice cream…

I make a quick stop in the media centre before continuing my rounds. Yas Marina Circuit goes to great lengths to ensure the media has all tools available to deliver: a massive, air-conditioned media centre with video projection; restaurant and outdoor relaxation area overlooking the yacht harbour; fast internet and free telephony. What more could one want, other than a good race? 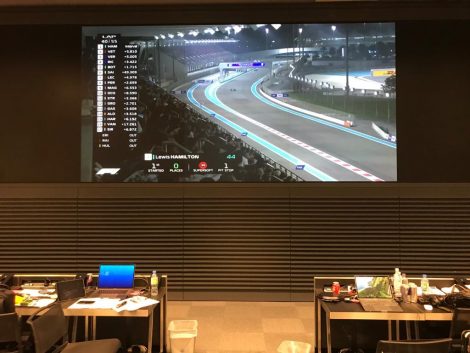 Final rounds of the paddock, during which an official source confirms that, as I surmised, that race results and championship standings will be provisional until the outcome of the Haas intent-to-appeal process, whenever that may be – up to three weeks hence. However, I have a sneaking suspicion that the team has expediently given notice to avoid media questions, rather than buying time for contemplation.

Let’s see. After all, why appeal a verdict that delivers the desired result?

Head for grid – and bump into Peter Sauber, founder of the eponymous team and a man for whom I have enormous respect. Clearly he is relieved that the team’s new owners have returned the operation – and, by extension, the family name – to respectability. He beams as he tells me how pleased he is Kimi Raikkonen, the driver he brought into F1 in 2001, is (re)joining the team for 2019/20, then apologises before heading off.

He’s spied the Finn pulling up in his grid slot, and the two embrace on the grid. A touching moment. Sadly, Raikkonen’s farewell bow for Ferrari is thwarted by dodgy electrics.

On the way back to the media centre ahead of the start I detour to Williams to grab some Magnum ice creams, provided by team sponsor Unilever – double caramel for myself, and selection of various flavours for my media colleagues to enjoy during the race. Thus I’ve enjoyed both the healthy and the decadent within two hours, all in a desert…

Race over, I hit the interview trail: two Toro Rosso drivers, Pierre Gasly and Brendon Hartley – the former has secured his immediate future with a Red Bull drive; the other doesn’t yet know what he’ll be up to 2019. I also hear from a predictably chuffed Toto Wolff, though Hamilton cancels his final written media engagement of the weekend.

Finally FIA race director Charlie Whiting debriefs us on a surprisingly eventful race. As well as addressing the concerns over Halo prompted by Nico Hulkenberg’s first-lap crash, he drops interesting details on other important points as well. 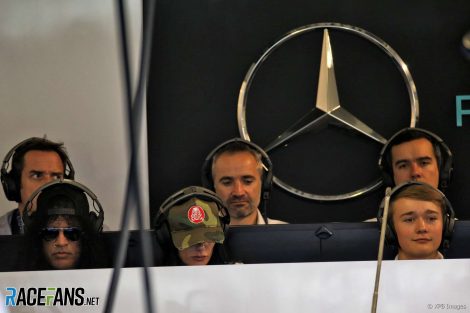 Post-race I’m faced with a choice between business and pleasure: Formula Two prize-giving or Guns N’ Roses concert. The latter is a band I’ve long wanted to see live, but duty calls. I head upstairs to the roof terrace for the F2/GP3 prize-giving.

There I meet Billy Monger, and we have a long chat about his future plans. As Hamilton said after the race, the double-amputee is an incredibly inspirational young man who displays absolutely no self-pity about the accident that changed his life, and is simply raring to get back into a race car. He hopes to contest the full F3 season next year, and had a trial cockpit extraction test this week, which he passed. He watched the action this weekend from the Mercedes garage with legendary Guns N’ Roses guitarist Slash.

I have dinner on the terrace courtesy of F2: per chance the same sort of spread I missed last night due to work, so tuck into chicken skewers, curry and rice and fish taco, rounded off with tiramisu before heading back to complete the last of my race filing for the year.

Leave the media centre and head for Dubai Airport, and an early morning flight back home. Thus ends my first season with RaceFans, a period I’ve thoroughly enjoyed, and trust you have, too. Keith and I set out to better serve you, our readers, by reporting directly from the F1 circuits of the world, and we hope we’ve achieved just that through our broad mix of scoops, exclusives, regular exclusives and on-the-spot reporting.

I have one more F1 excursion this year: In a little over week I travel to St Petersburg for the FIA Awards/Gala – when all world champions are officially crowned. It’s a great honour to be invited, and a trip I’m really looking forward to, particularly as we’ll be reporting directly from one of Russia’s most scenic cities. Have a great Christmas and a happy New Year, and see you in 2019!