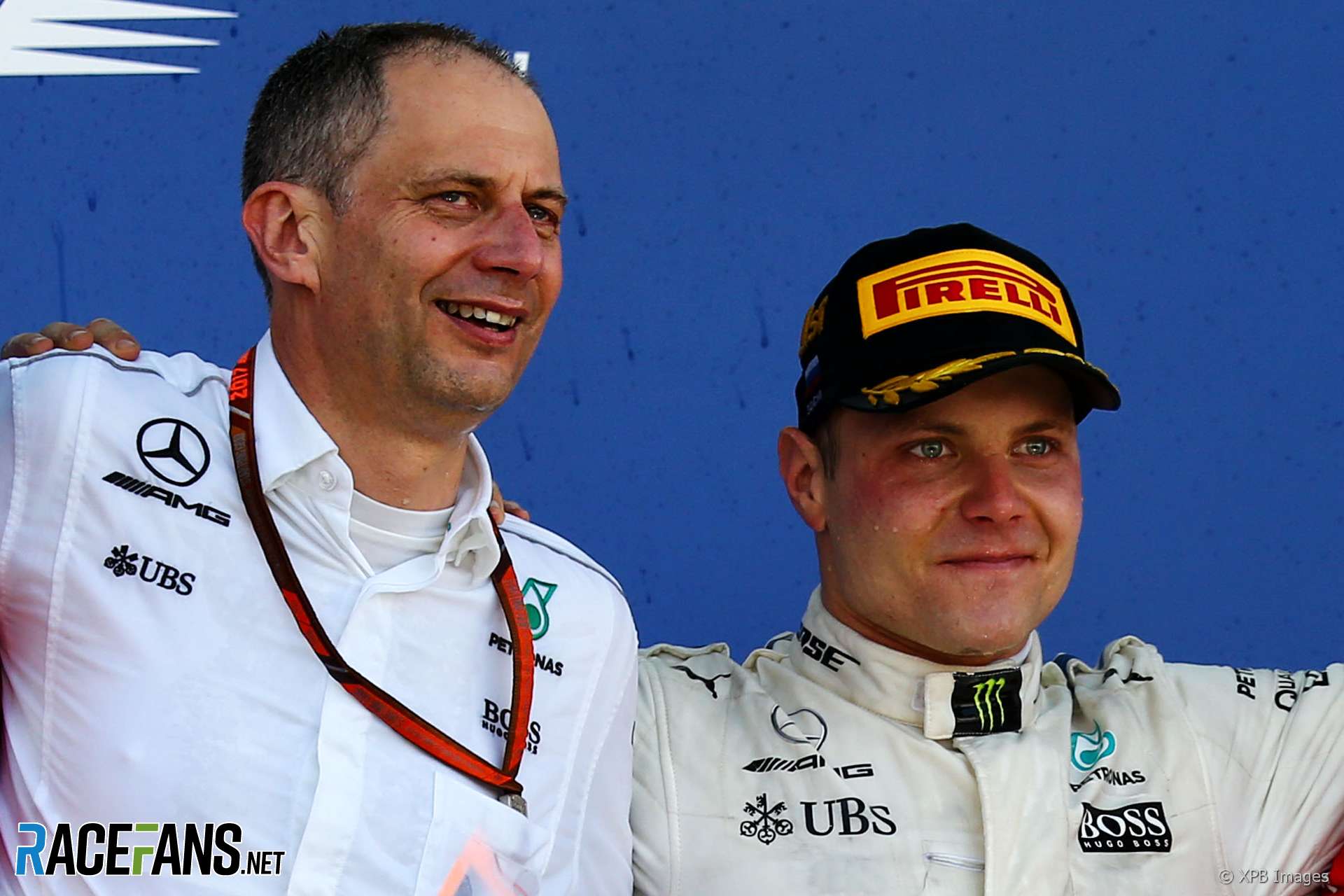 In the round-up: Valtteri Bottas’s race engineer Tony Ross, who was Nico Rosberg’s race engineer when he won the world championship in 2016, is moving to Mercedes’ Formula E programme.

Toto Wolff explained the change for next season:

Tony Ross is going to be the chief race engineer of our Formula E programme. He’s going to dash off into a funny environment with only one race day and funky cities.

Who replaces him, who, we’re discussing that.

Wayne Taylor Racing has confirmed @alo_oficial will drive for them in next year's @Rolex24Hours as we revealed yesterday:https://t.co/NlpKFIXYP0@kamui_kobayashi will share the car with him. #Daytona24

After #Kimi’s pole at #Monza, we needed to give him another mini-tyre so that his kids have one each! So this is for Rianna and Robin: you’ve got the coolest dad in the world 😎! pic.twitter.com/7F8czxIb4h

I’m tired of seeing the negative comments about @lance_stroll I’m not being bias but I think he’ll surprise us all next year. I’m looking forward to it and at the end of the day his dad saved the team! #F1 #F12019

I see @F1 deleted this Tweet about Will Smith which had about a dozen replies telling them to stop showing Will Smith all the time. #F1 #AbuDhabiGP pic.twitter.com/QvXiRHpZdv

At Indy with a few bosses. pic.twitter.com/ZA1Dbos6Ls

The suspicion is they are waiting until a point at which Lance Stroll can't be asked any questions about it – ie to avoid creating a difficult situation for him, not Ocon. But he'll get the questions eventually – it'll just be in Feb/March '19, not Aug/Sep/Oct/Nov '18

"Unfortunately, today we lost some track time to repair work, but overall I think there were no major surprises as these tyres seem to work and to be fairly similar to the ones we used this season."

"We are 10 weeks from starting our car build for 2019. An F1 car has about 14,000 parts and the carry-over between the last race of this year and the first of next year will be less than 10%. Many of those materials are sourced from a number of small-to-medium enterprises in the UK and across Europe. Some complex sub-assemblies will cross many borders before they arrive here."

McLaren have no regrets about split from engine partner Honda, says chairman (BBC)

"On the one hand, (it was) frustrating. On the other, we are committed to this. The way we were heading, the change was bound to come. Tremendous respect for Honda but the relationship wasn't working and so we had a civilised discussion and we decided to part ways."

"But then (commercial rights holders) Liberty (Media) essentially changed their mind and continued with the current engine, so we cancelled those plans."

Jos regarding Max: 'He needs to take risks every race for a podium finish' (Verstappen)

Jos Verstappen: "Max was forced to make a number of moves yesterday for him to be able to get third place. Looking at Hamilton, he starts from pole and then wins the race, you don’t need to take such risks."

"Despite the ordeal, Floersch says she hopes to race in the next Macau Grand Prix."

"Eduardo is the son of former Formula 1 star Rubens Barrichello, and their family bond is unmistakable. It rings true having my son as a second generation driver, so I am confident Eduardo and the whole Barrichello family will fit perfectly into our operation."

Finally! Every other series I’ve come across does this (notably Moto GP which often brings bespoke tires to certain races) where they always refer to a soft/medium/hard tyre but there is information available underneath if you care to look into it.

In the midst of racing and people switching compounds around it makes life easier for the viewer to know who is on what rubber relevant to the GP. With a reverse strategy battle going on and times etc. all I need to know is who is on performance tyres and who is on endurance rubber so to speak.
Gavin Campbell