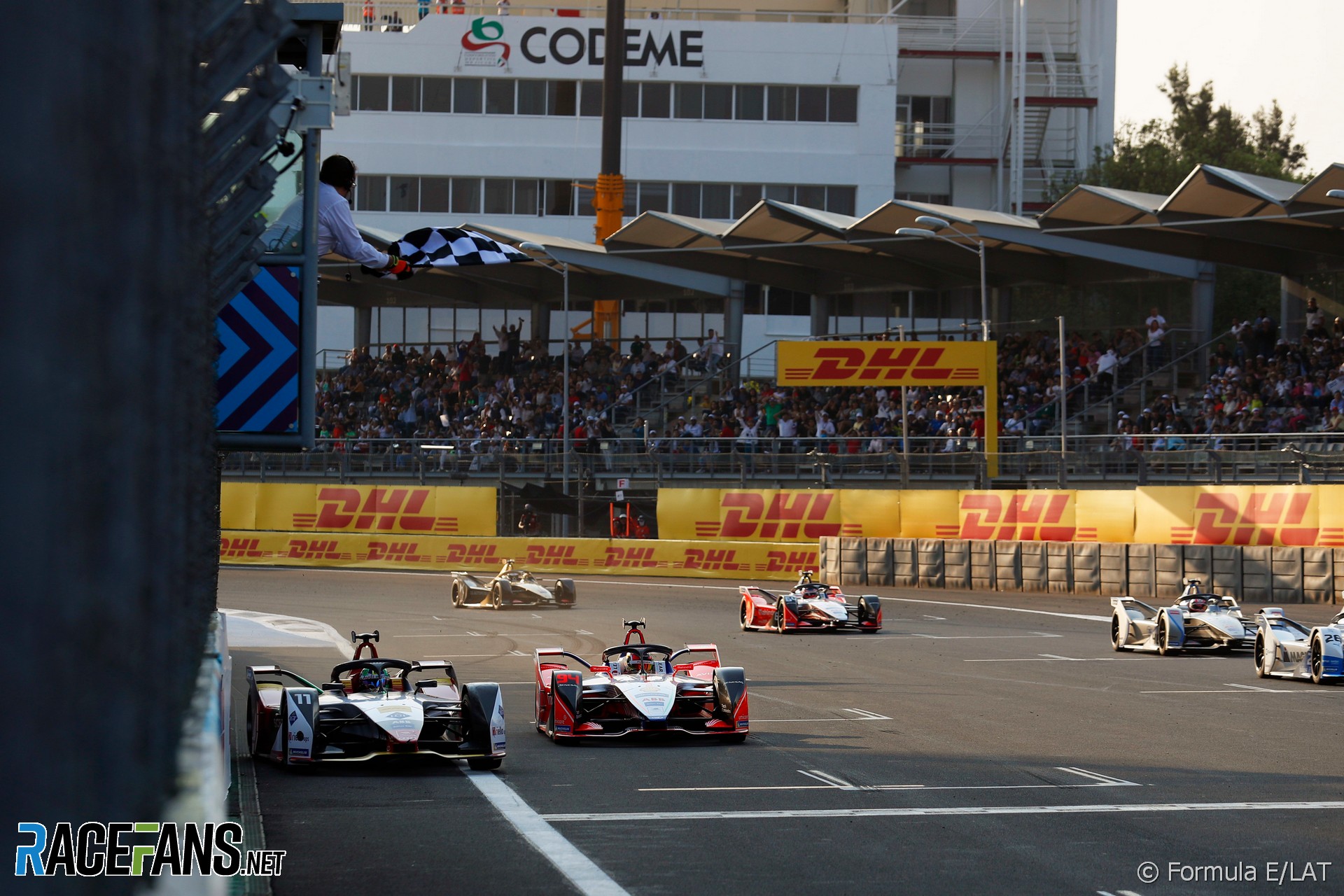 Lucas di Grassi won a thrilling Mexico EPrix in the last few metres of the race, snatching victory from long-time leader Pascal Wehrlein within sight of the flag.

An early red flag following a heavy crash for Nelson Piquet Jnr threw the leaders’ strategies into disarray, and led to both Nissan EDams drivers running out of power on the final lap while they were pursuing the race leader..

Wehrlein hit empty and coasted off the line while Di Grassi dived between the Mahindra and the pit wall to claim his second win at the Autodromo Hermanos Rodriguez.

Wehrlein had impressed by taking pole position for his third Formula E start but faced the threat of 2016-17 champion Di Grassi starting alongside him. The rookie held his nerve at the start, breaking away from the pack while Oliver Rowland vaulted from fourth to second and Jerome D’Ambrosio made up six places on the first tour.

But just two minutes into the race Jean-Eric Vergne was tackled clumsily by Nelson Piquet Jnr. The Jaguar driver s front tyre ran against Vergne’s rear, sending Piquet Jnr airborne and collecting Alexander Sims as he flew towards the chicane. Sims skidded into the TecPro fence while Piquet thumped the wall and came to a rest with much of his car’s front end missing.

Given the limited space to recover the wreckage, race control elected to red flag proceedings. Happily, the drivers involved were unharmed, including Piquet Jnr after his alarming flight.

With nearly 20 minutes lost to the red flag, the restart was declared with 41 minutes remaining on the clock. This was only announced two minutes before the restart, which prevented teams fully recalculating their energy targets, and ultimately set up the thrilling climax to the race.

Wehrlein left the pits leading the race behind the Safety Car for two laps, then maintained the lead despite fierce competition behind him. The assumption was that energy management would play no further part in the race, with the majority of drivers at 88% remaining energy or more – only just below the level at which they can regenerate.

With 34 minutes remaining, Buemi and Antonio Felix da Costa were fiercely fighting, Da Costa trying to make the most of his final minute of Attack Mode. However, Buemi remained a solid barrier to third position and despite burning extra energy fighting off the BMWi Andretti, kept his place.

Rowland had slipped somewhat back from Wehrlein since the restart, unable to get closer than roughly half a second back from the leader – while just outside the points, both Virgin cars were battling each other and Jose-Maria Lopez for the final points place. Sam Bird repeatedly radio’d to ask Robin Frijns be moved out of his way, while Daniel Abt advanced behind them and Frijns was unable to leave a gap while staying close behind the obstruction of Lopez.

Fortunately for one team salvaging a weekend (although less fortunately for Dragon, whose other driver was at the absolute back of still-running cars) Lopez was handed a drive through and ten second penalty, removing himself from the battle and allowing the Virgin drivers to attempt to continue the race, although not before they managed to make slight contact with each other.

By the time the clock had ticked down to under ten minutes, Di Grassi was on a charge – although most drivers had around 15% energy remaining by this point, it was clear he had about a 2% advantage, which would prove crucial as the 45-minutes-plus-one-lap format began to trip some drivers up. Having recalculated energy targets quickly, the Nissan cars were beginning to struggle with heavy lifting and coasting needed to get round a lap.

Di Grassi, still able to activate Attack Mode, pushed past Buemi and then Rowland – who then clipped each other – and went on to hunt down Wehrlein. Despite maintain a 2% energy advantage over his rival, Di Grassi was unable to get past the Mahindra and both Da Costa and Edoardo Mortara were in turn hunting the Audi down as they rose up an order of attrition caused by drivers hitting zero. Both Nissan cars fell to the back, nothing left for the final lap and Wehrlein went into it with just a couple of percent remaining.

Wehrlein’s chance to win the race vanished when he cut a chicane on the final lap to keep Di Grassi behind. He was given a five-second time penalty after the flag fell, but before then Di Grassi was determined to sort things out on the track.

Coming out of the final chicane the ABT Audi driver seized his chicane. Wehrlein’s remaining energy hit zero as he arrived on the start/finish straight, and Di Grassi swerved right to collect the chequered flag first.

Di Grassi, Wehrlein and Da Costa crossed the line covered by less than half a second. Wehrlein’s penalty handed second place to the BMW driver, and also elevated Mortara, D’Ambrosio and Lotterer. D’Ambrosio’s recovery from 18th puts him in the lead of the championship, while despite their disappointment in Mexico Mahindra lead the teams’ standings ahead of Virgin. The next Formula E round is in Hong Kong on March 10th.