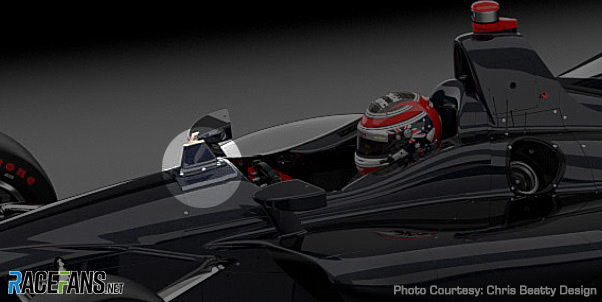 IndyCar has revealed a new Advanced Frontal Protection which will be added to its cars having decided not to proceed with introducing the Windscreen it tested last year.

A 76mm tall piece of titanium will be added in front of the driver. IndyCar says the device has been in development since 2012 and has been designed to deflect pieces of debris away from driver. AFP has passed the same impact tests its cars’ roll hoops are subjected to.

The series previously tested a canopy-style device called the Windscreen devwloped with PPG Aerospace. However according to a statement issued by IndyCar, “recent testing at PPG’s facility in Huntsville, Alabama, proved that work remains before IndyCar could implement its use.”

IndyCar had looked at introducing an F1-style Halo but said it cannot be fitted to the current DW12 chassis, which is going into its eighth season of service.

“Safety is a never-ending pursuit, and this is IndyCar’s latest step in the evolution,” said IndyCar president Jay Frye said. “There are more details to come about the phases to follow.”

The device will be fitted to all cars at an open test at Indianapolis Motor Speedway on April 24th. The championship begins on March 10th at St Petersburg in Florida.