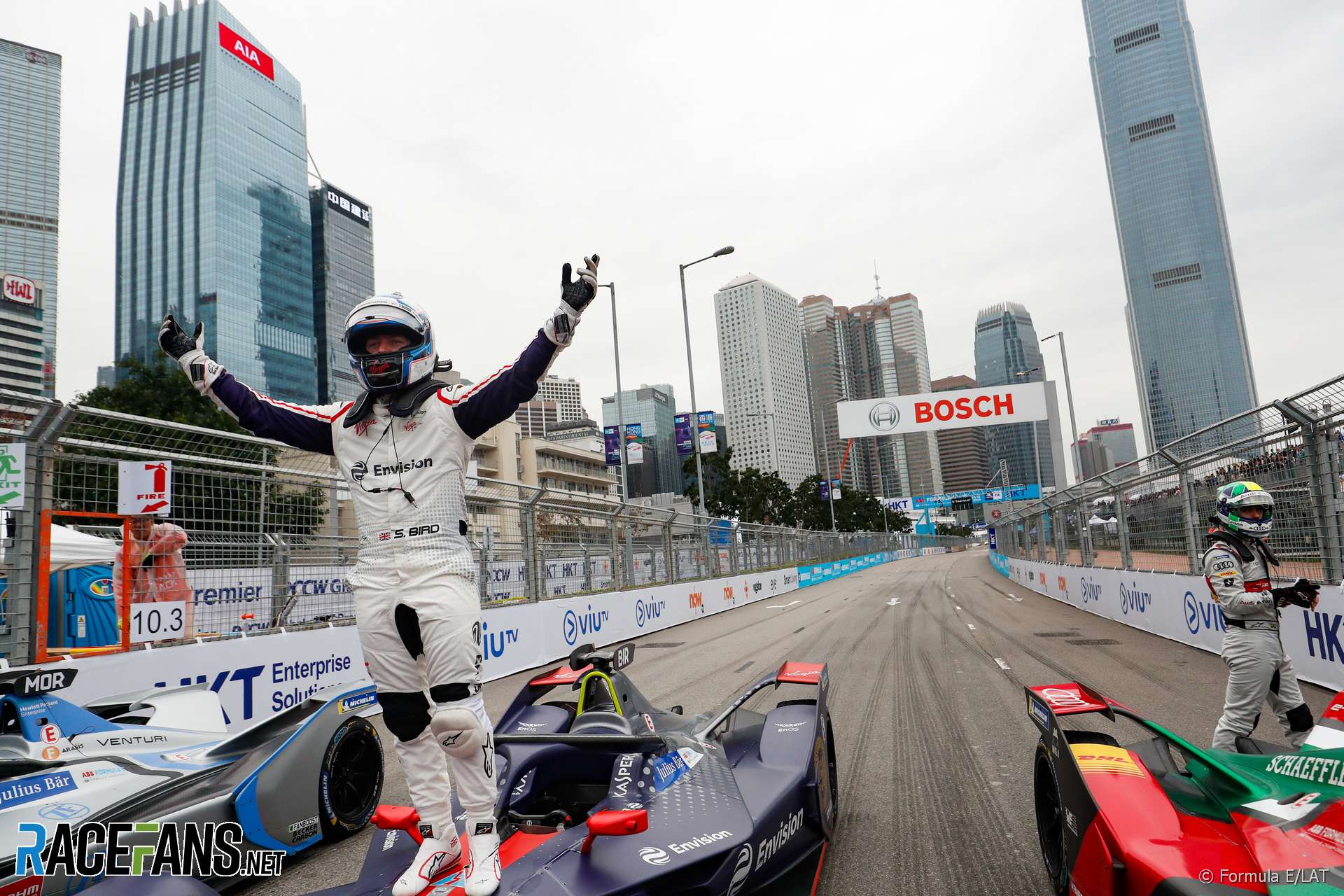 Sam Bird won an incident-packed Hong Kong Eprix but is under investigation for a last-lap collision with Andre Lotterer.

Running earlier in the day had been wet, including rain between group qualifying and Super Pole sessions but the skies held off for the race, leaving an initially greasy track to steadily develop.

Stoffel Vandoorne started from his debut pole position in Formula E but was immediately gazumped for the lead by an incredible getaway by Oliver Rowland. Sam Bird made a similarly brilliant start, moving up five places during his first lap to have passed Vandoorne for second by the time they saw the start/finish line again.

Rowland looked as though he was making some headway on a lead, the drivers behind him preoccupied with Bird’s charge to the front but the race was neutralised before lap 3, when a multi-car pile up between Felipe Nasr’s Dragon and both Mahindra cars first brought out the safety car and then red-flagged the race completely.

Speaking immediately after the retirement, where both Mahindra drivers (who started at the back of the grid) were forced into Nasr, awkwardly stuck into the wall at turn 2, Jerome D’Ambrosio said that Nasr should have been retired from the race due to clear damage on his car, “There was obviously something wrong with his car, causing huge amounts of smoke – we couldn’t see behind it, in a straight line.”

The race restarted, with an added 10 minutes of time to make up for stoppage and restart leaving 38 minutes remaining. Vandoorne seemed to have suffered during the red flag and immediately lost another place to Andre Lotterer, who proceeded on to menace second place Sam Bird.

Rowland’s lead ended just a few minutes later, in a bizarre incident where he seemed to accidentally activate the Full Course Yellow constraint setting on his steering wheel by accident, slowing his car on track. Moments later, the newly second-placed Lotterer took advantage by an error from Bird in virtually the same location – the wide curve of turn two – to decisively take the lead.

With 23 minutes remaining, Lotterer and Bird were continuing to battle but with a clear energy advantage for Bird. Lotterer’s remaining usable energy continued to fall behind, until he was 4% below Bird and being radio’d warnings by his engineer.

Fortunately for the DS Techeetah driver, chaos was destined to disrupt the race further with Alexander Sims retiring after colliding with a wall and Sebastien Buemi clashing wheels with Robin Frijns, both bringing out yellow flag areas on the track. Finally for this third of the race, Stoffel Vandoorne retired with a broken drive shaft – a problem teammate Gary Paffett had had earlier in the season.

With seven minutes to go, an attempt at a recovery drive by Rowland after his earlier mistake took him out of the lead ended with a broken rear axle, stranded on track after hitting a barrier. A safety car had to be deployed while a tractor retrieved the car but at slow enough speed to allow the race to restart, lapping the remaining drivers with space for recovery.

This worked, seeing the safety car in with two minutes to go and Lotterer and Bird’s extremely fierce fight for the lead restarted. Despite a gaining third-placed Edoardo Mortara, the pair continued to duel for the win until the very last lap, after the chequered flag had fallen on 45 minutes.

Having spent much of the race defending from bird, Lotterer finally came undone when contact from the Virgin driver left him with a right-rear puncture. Lotterer limped on for a few corners but soon succumbed to the inevitable, Bird taking the lead and victory ahead of Mortara and Di Grassi. But the new Bird’s move was under investigation made for a somewhat muted ceremony, and a lingering question mark over the race’s outcome.