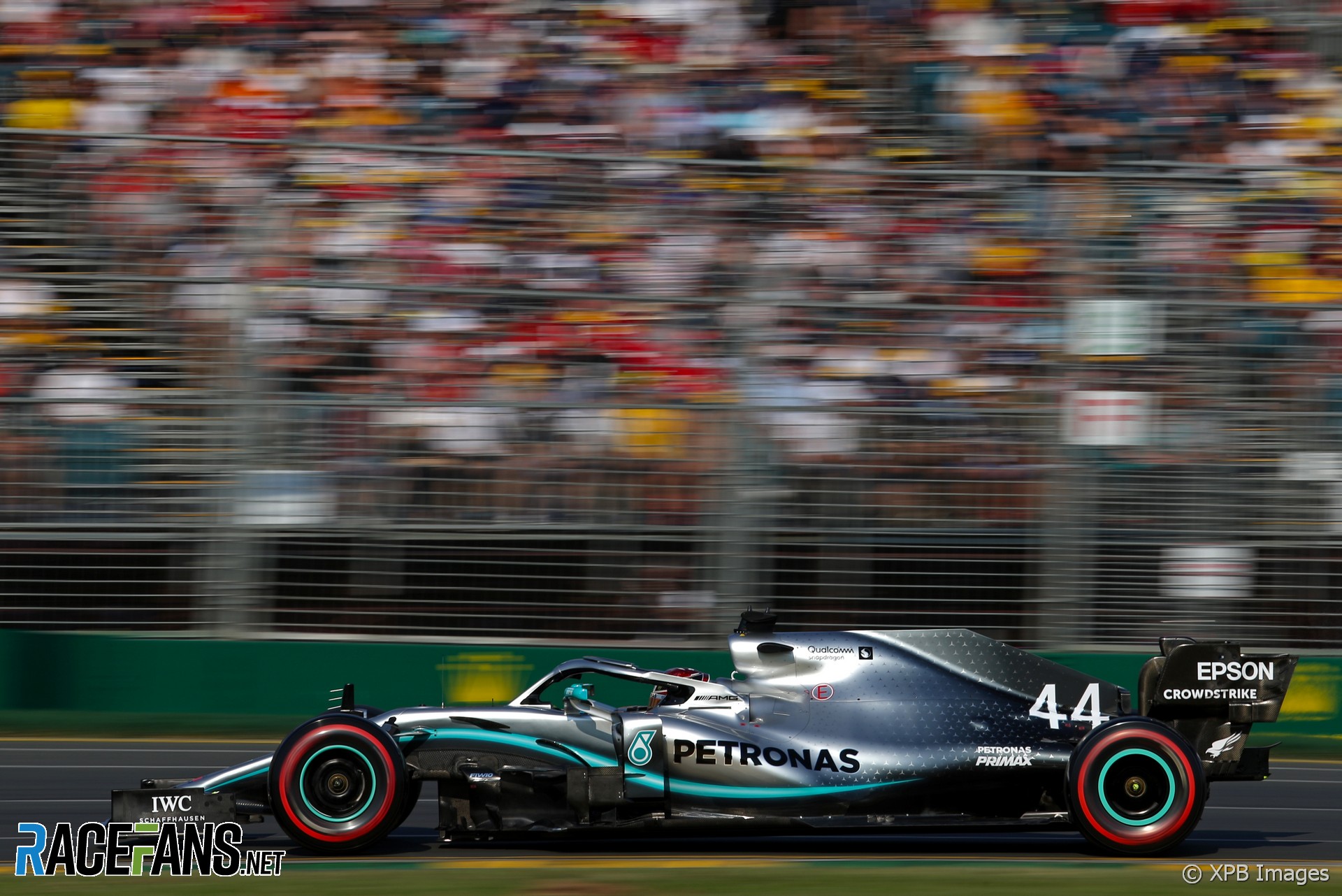 Pole position for the Australian Grand Prix is no guarantee of victory. Lewis Hamilton#s career statistics make that quite obvious.

Sunday’s race will be the eighth time he’s started from pole position at Albert Park. But of those seven previous starts at the sharp end, he’s only converted two into victory.

What happened in the others? In 2012 and 2016 he was beaten to turn one by team mate who started alongside – Jenson Button and Nico Rosberg respectively. There’s a ray of hope for Valtteri Bottas, who was bumped back to second on the grid by Hamilton in the dying seconds of Q3.

In 2014 his power unit let him down. And in the last two seasons he finished second to Sebastian Vettel. On both occasions the Ferrari driver jumped him in the pits, though the last occasion was fortuitous as Mercedes had miscalculated how close behind Vettel Hamilton needed to be during a Virtual Safety Car period, allowing the Ferrari driver to take advantage.

So if he makes it to turn one ahead and Mercedes avoid another of their periodic tactical screw-ups, Hamilton will probably be home free. Given Mercedes’ pace advantage, the chance of a threat emerging from behind seem slim, particularly as overtaking is difficult on this configuration. Last year’s race saw a total of 15 passes.

Nonetheless Albert Park can produce lively races – it’s bumpy, narrow and there’s little run-off. Like last year, an ill-timed Safety Car could be the biggest threat to the world champion’s hopes of scoring his first win at this track since 2015.

[mpuzweeler01]It looks like being a fight for third place behind the Mercedes drivers. From fourth on the grid, Max Verstappen is teed up nicely to take a shot at Vettel on the inside of turn one, particularly if the Mercedes drivers use a little formation driving to pin the Ferrari driver in, or edge him onto the grass at turn two.

Haas lead the midfielders on the grid and will be painfully aware of how they squandered a big points haul at this race 12 months ago. Guenther Steiner has said that was the race which cost them fourth place in the championship, so Romain Grosjean and Kevin Magnussen will be out to ensure they bank a decent haul at the start of the season. Particularly as F1’s smallest team has tended not to develop its car as quickly as its rials – now is the time to make hay.

Behind them is the shock of qualifying, Lando Norris, eighth in his McLaren and 10 places ahead of his team mate, who dropped out in Q1 when he was held up by Robert Kubica. Norris’s starts were rather variable in Formula 2 last year, though that was partly down to problems with the equipment, and he’s had plenty of opportunities to practice ahead of his debut.

But as Norris and the likes of George Russell and Alexander Albon are about to discover, doing it in practice and doing it for real surrounded by 19 other F1 cars heading into a bumpy braking zone is a different matter.

The performance shown by the cars so far indicates that, at this track at least, the prediction that the midfield will be closer to the front-runners has been borne out. McLaren, Haas, Racing Point, Toro Rosso and Alfa Romeo have gained 0.6-1.6 seconds per lap more than Mercedes, Ferrari, Red Bull and Renault have at this track since last year.

This indicates we will see the field spread out at a slower rate than last year. This will have a knock-on effect on strategy, as those near the front needs gaps behind to drop into to make their pit stops.

Last year the difficulty of overtaking had a significant bearing on strategy as teams were desperate to avoid surrendering track position. The aerodynamic changes for this year are intended to address that, but don’t expect it to make a great difference at Albert Park. “This is a track where even if you were running go-karts around it there wouldn’t be overtaking,” remarked Kevin Magnussen on Thursday. If we at least see cars running closer together than last year, that will be an encouraging sign for the season ahead.

The final key change for this race is the bonus point on offer for the driver who sets fastest lap. The prevailing view among drivers is this is most likely to be scored by whichever driver among the front-runners has enough of a gap behind them to make a pit stop late in the race, emerge on a fresh set of tyres and bang in a flying lap.

On Thursday Kubica suggested we could see a “domino” effect of one driver pitting, creating a gap for another driver ahead to make a pit stop. But this will only happen if the first driver decides to pit earlier than the last possible opportunity – i.e. the penultimate lap of the race – and it’s not obvious why they might choose to do that, as they wouldn’t want to give a driver ahead a chance to pit.

A more complex scenario would be if a late Safety Car period gives several drivers the chance to make late pit stops for tyres. But whether ‘the show’ would be better served by those drivers potentially trying to set fastest lap instead of racing each other position remains to be seen. There’s a good chance we could get our first real-world example on Sunday.

Who will win the first race of 2019? Share your views on the Australian Grand Prix in the comments.