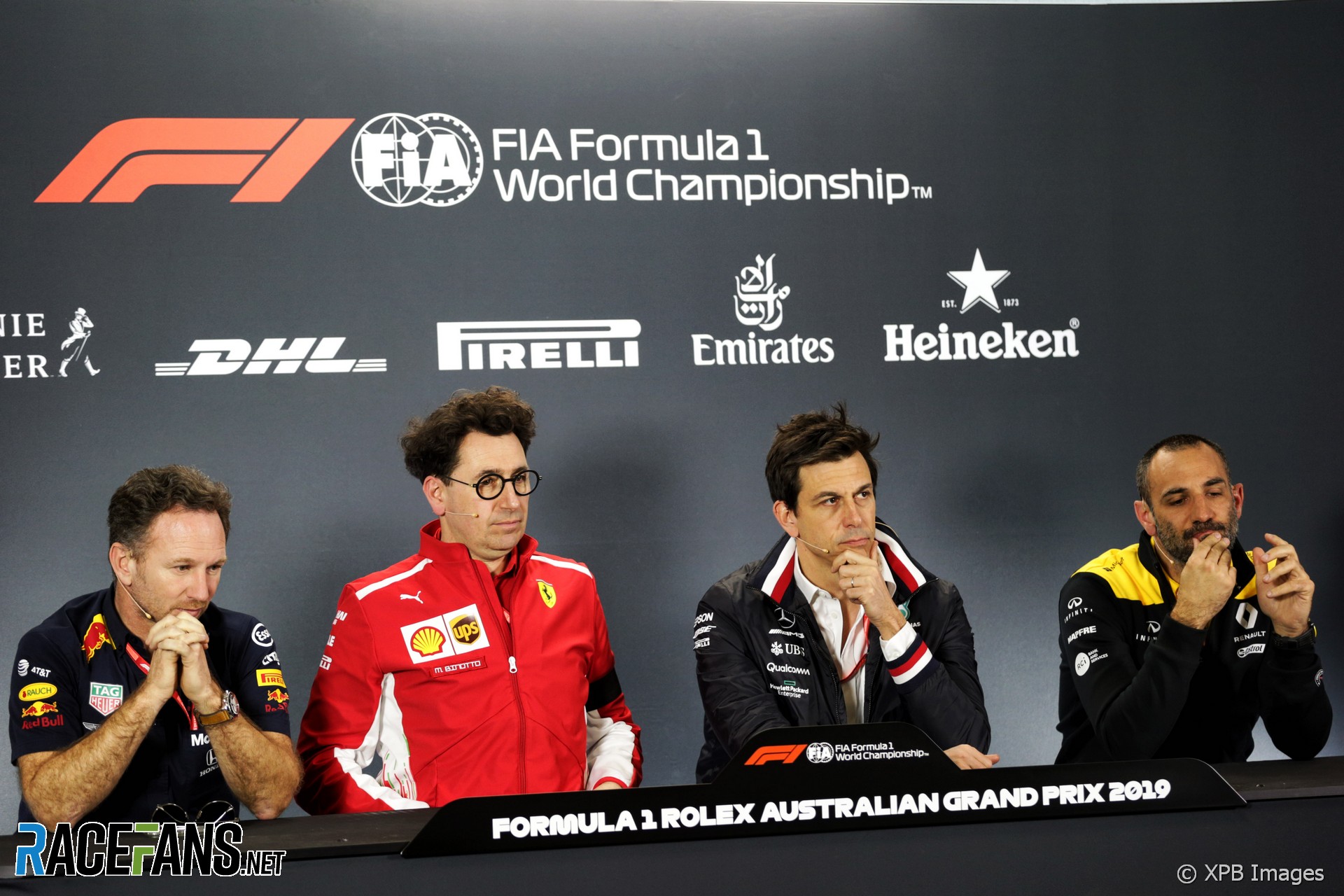 The excruciating delays surrounding Britain’s exit from the European Union, and its potential impact on Formula 1, is making major players in the sport increasingly jittery.

Even in a sport accustomed to overcoming what would often be insurmountable challenges – typically through detailed contingency planning and considerable ingenuity – the governing body FIA, commercial rights holder Liberty Media and at least eight of ten teams are unable to plan for their tomorrows simply as they have no idea how or even whether ‘Brexit’ will go ahead.

At the time of writing, matters are no clearer than they were almost three years ago when 51.9% of voters in Britain’s EU referendum backed ‘leave’. Arguably, the situation is even less closer. For two years the date of Brexit was reckoned to be cast in granite. Yet one week before the deadline it was shifted, bafflingly, without a definitive replacement date being agreed.

Given the state of flux, F1 folk based in Britain – an estimated two-thirds of the sport’s staff – could well depart for the Monaco Grand Prix on May 26th without knowing whether their families and/or employers will be domiciled inside or outside of Europe upon their returns.

Worse, many of the people thus affected are none the wiser whether they will have long-term employment within F1 to look forward to if any of the more drastic scenarios under which Britain could leave the EU play out. A ‘hard’ or ‘no-deal’ Brexit could seriously compromise Britain’s ability to trade with its nearest neighbours.

Of the almost 6,500 heads directly employed by F1 teams and Liberty, around 4,200 are based in the UK. Many hold non-racing positions but the cores of these teams consist of specialists recruited from across the globe. For many their work is more than just a job but a passion, and one which stands to be disrupted by politicking.

It is not only the movement of people that is likely to be affected by Brexit: Formula 1 cars consist of upwards of 20,000 individual components ranging from the tiniest screws to bare chassis and complex castings. Many are sourced from across the world, but mainly from within the EU bloc.

Six teams are based within Britain, and Toro Rosso has ramped up its aerodynamic base in the UK. Equally, Pirelli undertakes research and development on F1 rubber in Milan, manufacturers the tyres in Romania and Turkey, but operates out of a base in Slough, near Heathrow. Imagine the potential for disruption.

Given Britain’s motor racing infrastructure – widely acknowledged as among the best in the world – the implications of Brexit cut deep. Many suppliers have their motorsport bases within ‘F1 Crescent’, as the arc cutting from Surrey (McLaren) across Oxfordshire (Renault, Williams) through Northamptonshire (Mercedes, Racing Point) to Buckinghamshire (Red Bull Racing) and Bedfordshire (Toro Rosso) is known.

Although British-based teams order parts from local addresses, in many instances these are imported – or contain foreign components. In the event of a ‘no-deal’ Brexit the country is unlikely to have suitable trade agreements in place, which would in turn not only affect pricing and availability due to import duties, but be complicated by the inevitable customs clearance delays, certainly during the initial period.

In a global sporting industry that relies upon split-second timing, where the difference between victory and humiliation is inextricably linked to regular update programmes, teams rely upon speedy turnaround times from specialist manufacturers. Consider a company running its machines 24/7, only for its state-of-art goods to be delayed at borders for weeks on end, whether to or from the United Kingdom.

Among the teams, one of the most vociferous critics of Brexit has been Mercedes Grand Prix. The German-owned outfit is an operating subsidiary of Mercedes-Benz GB – yet the company employs workers representing around 30 nationalities, many of these within the EU.

The company regularly exchanges staff, technologies, and expertise with Stuttgart. Such programmes could be curtailed in future, or at the very least suffer critical delays due to the raft of unknown factors. Would you easily job hop across borders during the period of uncertainty?

Mercedes CEO Dieter Zetsche recently came out strongly against Brexit, saying “It would have very negative consequences, especially for the automotive industry.” In times of uncertainty companies, particularly listed entities, tend to reduce non-essential spend, with motorsport budgets often the first to be culled. Mercedes is committed to F1 until the end of 2020, but not beyond.

The company’s head of motorsport, Toto Wolff, admitted during testing “we are monitoring it very closely because we have a large operation in the UK,” and later branding a no-deal Brexit “a nightmare scenario that that I don’t want to even envisage” and “the mother of all messes.” He warned the disruption could even hand a competitive advantage to arch-rival Ferrari.

Intriguingly, in May 2016, a month before the referendum, when asked by this author about the potential implications of a split, Wolff said, “When I took the job [as Head of Motorsport] in 2013, I was told by my boss, Dieter Zetsche, ‘Don’t comment on politics’, so I’m not commenting on politics. We’re a sporting [team], so we just have to get on with our job.”

Renault straddles the divide: Its F1 race operation is based in the UK but its engine facility is in France. As such, it will feel the effects from both sides. Asked to comment, Renault F1 Sport boss Cyril Abiteboul said, “Obviously don’t want logistics or freight to be delayed in any shape or form, as well as [movement of] people.

“We’ve grown very quickly in recent years, and it’s been done in particular thanks to the possibilities offered by the UK, bringing in youngsters, people coming out from school, we don’t want that to change. That would be dramatic for Formula One.

“But I have full trust in the authorities of Great Britain to understand this is not in their interest to lose what is one of the pillars of British industry, which is motorsport and Formula 1.”

In an environment as complex and controversial as F1 such leaps of political faith are, as the record shows, seldom rewarded. While Renault is said to be committed to F1 until end-2024, the word in the paddock is that it is a “soft” contract with various exit clauses.

Although F1 teams have not reported negative impacts during the current pre-Brexit process – during which Britain remains part of the EU – they expect there will be disruption if and when a split becomes reality, particularly as the sport operates to tight deadlines. These are expected to become increasingly stringent as the F1 calendar expands.

Renault’s engine customer McLaren says it has taken measures to prepare for the various Brexit endgames which remain possible. “We have been planning various contingencies for some time and we continue to monitor the situation,” a spokesperson told RaceFans. “We will adapt to the outcome and take the appropriate measures for our business to continue to be successful.”

As for the sport’s commercial rights holder, Liberty Media’s F1 CEO Chase Carey told an investor call recently that he was confident F1 would not suffer unduly, mainly due to its global outlook.

“[On] Brexit, we’ve got some logistical issues, which are more sort of, ‘if you end up with a no-deal Brexit, how do you get in and out of Britain with various equipment?’

“But it’s not a financial issue, it’s more logistic, so we’re contingency planning for things like that. While certainly being European-based, we’re a global business, and we’re unique.”

Which Formula 1 as a sport most certainly is, but it is equally a convoluted multi-billion business entity which is at the same mercies as other enterprises. This entails not only complying with the same processes and restrictions, but also putting in place procedures to enable the ‘show to go on’.

For all the faith Abiteboul and Wolff place in politicians and people, F1 does not enjoy the best of reputations among legislators. Back in 1997 the British government was heavily criticised after provided tobacco advertisers special exceptions for F1 amid accusations of a ‘Bernie Bung’. It has steadfastly refused to grant financial support for the British Grand Prix, so much so that the race is currently endangered.

The only truly British owned team on the current grid is Williams – the majority owners of the balance are Bahraini (McLaren), European (Renault, Mercedes, Red Bull, Toro Rosso), or Canadian (Racing Point). Yet their importance to the UK as employers and supporters of its thriving motorsport industry as obvious. Nonetheless, they can expect the government will be reluctant to grant concessions even if it were able to do so, particularly given the raw emotions surrounding Brexit.

While it is too early to judge whether Brexit will become reality next week, next month, next year or even at all – frantic parliamentary sessions and diplomatic missions are currently scheduled to find some path through the madness – it is evident that some teams will be heavily affected, while others are hardly touched at all. Wolff fears Ferrari may even benefit…

Will such disruptions really tip the competitive balance in favour of Ferrari? Possibly rather than probably, and that is unlikely to be the only reason. There is no doubt, though, that an end to free movement of people will hinder the sport: Talented Britons may find it difficult to join European teams, and vice versa.

What about foreigners already domiciled across borders? It’s touch and go at this stage for them despite political promises, and thus the fate of these workers is dependent upon the final outcome. What this decree hinges upon is, though, currently unclear – which is where we came in. The situation for movement of goods across borders is equally murky.

During its 70-year existence F1 has overcome far greater obstacles than border bickering. The sport thrives on extreme challenges, and if the next happens to be balky customs processes or sorting just-in-time inventory levels in the face of indeterminate delays rather than figuring out the least draggy wing or best DRS, the cleverest guys will around will always find a solution.

Provided, that is, they’re not from the ‘wrong side’ of the border, of course.

Who knows, the entire European bloc could well benefit from F1’s expertise and experiences, as have many other industries benefitted in the past from F1’s unique skills at solving problems. That said, given its current technical, sporting and commercial challenges which could take to end-2020 to (semi) resolve, political obstacles are surely the last thing F1 needs right now.

Which F1 teams will be most affected if Brexit happens?

We considered each team’s exposure to negative consequences of Brexit and rated them from one (unaffected) to five (seriously affected).