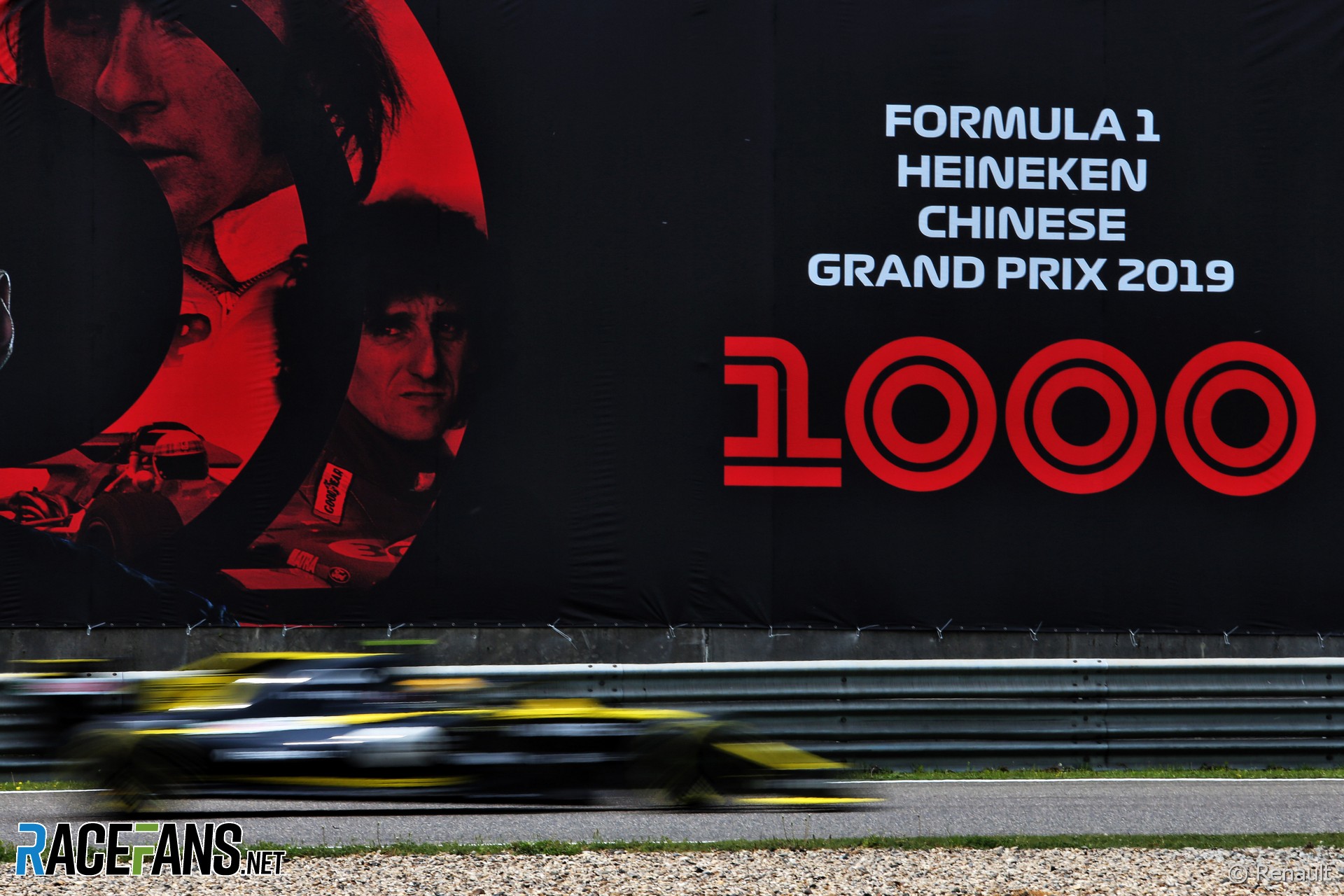 By noon on Saturday most folk in the Shanghai paddock had agreed to disagree over whether the Chinese Grand Prix at the Shanghai International Circuit marked the 1,000th Formula 1 race, and got on with the task of ensuring that the race weekend proper proceeded according to plan.

There were, after all, 26 championship points on offer regardless of any off-track celebrations. And as Max Verstappen said, the 1000th grand prix happens to be the first race after the 999th round…

But there were few (if any) dissenters about two aspects of the event: first, that the Chinese Grand Prix marked the 1,000th world drivers’ championship round, and second, that F1 – and by extension, Liberty Media and SIC – had blown the opportunity.

There are of course, many mitigating circumstances. Not least the race’s distance from Europe, and the associated costs (and red tape) involved in assembling a collection of cars and memorabilia representative of F1’s various eras, from the first round at Silverstone in 1950 to date. The fact many iconic cars and kit from earlier periods are in the firm grip of one Bernard Charles Ecclestone surely made it no easier.

Equally, hosting the celebrations at race three in a set of four flyaways can only have further complicated the logistics and availability of cars, certainly more so than had celebrations been held in Europe. Simply put, the venue does not have the lure of F1’s more iconic events, and the byzantine formalities associated with travelling to Shanghai does nothing to stoke enthusiasm for the race.

Still, there were three (locally-owned) cars on display. A championship-winning 1993 Williams, a 1997 Stewart and a Kimi Raikkonen-era Lotus which won a single race in 2012. A selection of helmets and trophies were displayed. The only other sops, apart from a celebratory poster handed to the media, were giant 1000 graphics painted onto the paddock surface, a red-carpeted legends walkway and a 1000th grand prix coin.

A fan festival event was held in Shanghai itself but what impact that had was hard to judge from the track, which is about an hour’s drive from the city. Renault used the opportunity to showcase its junior driver Guanyu Zhou, formerly of Ferrari’s Driver Academy, though the event seems to have attracted a modest turnout.

The distinct lack of interest from legendary F1 figures was noticeable. Did the milestone 1,000th event leave them cold? Was it general apathy about Liberty’s running of the sport, particularly as most (if not all) enjoyed some sort of relationship with Ecclestone? Inconvenience and costs of 30-hour return flights to what is arguably the most soulless venue on the trail?

That said, “soul” does not necessarily equate to length of service on F1’s calendar: Although SIC has been on F1’s calendar for 16 years (now), it doesn’t hold a candle to, say Singapore’s race (12), or Mexico (five this year since its return after an absence of 25 years).

A race and venue has soul or not – just as human’s do (not) have charisma – and, sad to relate but no less true for it despite almost a half a billion dollars spent on this state-of-art venue in the early 2000s, in most books Shanghai is seriously lacking in the ‘soul’ stakes.

True, three world champions besides those competing were present – Alain Prost, Damon Hill and Nico Rosberg – but all were in China on duty: the French four-time champion with Renault, the other two as broadcasters.

As for others who joined the current crop of drivers for a celebratory grid photo: Helmut Marko was present as Red Bull consultant, Jos Verstappen as Max’s father/manager, Derek Warwick as FIA driver steward and Esteban Ocon as Mercedes reserve driver, with Marc Gene doing Ferrari/TV duty. Seven others, including grand prix winners (David Coulthard/Johnny Herbert), had TV gigs. Would they have made this particular trip for celebratory purposes? Doubtful…

These factors were, though, known well in advance, yet Liberty ploughed ahead and scheduled ‘#Race1000’ for Shanghai. Forget not that F1’s commercial rights holder constructs the calendar for ratification by the FIA, and thus the host of the third race lay very much in the hands of Liberty.

Given that season-opening and closing races command premium fees, one wonders why Liberty did not hawk the rights to this milestone event amongst race promoters and sell to the highest bidder. If that turned out to be China, well and good, with incremental fees covering the logistics costs, and teams also benefitting.

At one stage there were suggestions that Liberty did not wish to offend the Chinese so kept the 1,000th race Shanghai. However (confirmed) reports emerged during the weekend that Silverstone had been offered the slot, but rejected it.

This was due to its prior, costly experience of hosting an April British Grand Prix in 2000. Storms lashed the Easter Sunday race, qualifying attracted just 15,000 punters and all car parks were closed on race day. Chaos does not begin to describe the event.

Ross Brawn, Liberty’s Motorsport MD and F1 legend, did not make the trip. Neither did Liberty Media president and CEO Greg Maffei, or John Malone, the chairman and controlling owner of Liberty Media. If Liberty’s biggest wigs could not be bothered to attend the biggest celebration of their biggest single acquisition, why should anybody else bother?

True, over the years there has been a massive improvement in spectator numbers in Shanghai. There was a time when young men, dressed in identical gear, arrived in hordes by strangely drab buses shortly before the start. But considering China has a total population of almost 1.4 billion, 40 million of which live in Shanghai’s metropolitan area, race day crowds of around 80,000 are nothing to shout about.

Although the words ‘sold-out’ were variously heard – including from Mercedes team principal Toto Wolff – the fact is the circuit has a capacity of 200,000. Whole grandstands are routinely into giant advertising hoardings. The main stand was packed, but general admission areas were sparsely populated, while the stands around the back were less than half full.

FOM reported a three-day crowd of 160,000, so in real terms SIC operated at 40 per cent to capacity. To put these numbers in perspective, Spain (population 50m), admittedly with a local hero but facing stern competition from F1 races in close proximity, pulls equivalent three-day crowds, yet the population of nearby Barcelona is just five million.

Nonetheless Wolff suggested that China should consider a second race: “I think we’ve achieved the first step. This is to have a sell-out crowd in Shanghai. And, certainly I think it’s a big enough place. Formula E is having two races in China: One in Sanya and one in Hong Kong. Why not go to Hong Kong race downtown or go to Beijing? I would love that.”

In fact, RaceFans understands that on Sunday, during a meeting between F1 CEO Chase Carey and team bosses, progress reports were given on a Dutch round – progress is being made, but nothing signed yet – while the chances of a second Chinese round, preferable a street race, were tabled.

Surely the trick is to ensure one event does the business before charming another promoter into a race? It’s a similar case in the USA: Austin’s US Grand Prix struggles to survive, yet F1 is desperate to stage races in Miami and elsewhere. Would it not be better to concentrate on sustainable races than chase calendar slots?

The make-up of the Chinese motor market – the world’s biggest – provides another lesson. It peaked at almost 25m units in 2016 before shrinking by around 15 per cent. In 2018 the best-selling brand was Volkswagen (3m units), with GM brands Buick/Chevrolet in second place and Honda third, albeit both with less than half VW’s sales. Volvo owner Geely was fourth.

In the luxury segment Audi, BMW and Mercedes level-pegged at 600,000 each. Of the eight brands mentioned, only two are in F1. Renault, 51st on the list, battles to move just 50,000 cars per year and is comprehensively outsold by local brands.

Ferrari sold around 700 cars last year across China, Hong Kong and Taiwan, so no big shakes given Europe, the Middle East and Africa with a combined population around a third as much yields five times as many sales, and the US market is worth 2,800 units. F1 appears to have little influence on car purchase decisions, particularly as Lamborghini is closing in.

“I think China is the largest market for us,” said Wolff, although the latest statistics indicate that the EU Common Market is 25 per cent larger.

“[China] is a great place, and to see all the major brands, OEMs [original equipment manufacturers], the ones that participate in Formula 1, will use, will activate much more in China than they used to do in the past, and I think it’s good because we’re activating Formula 1, and we’re activating for everybody.”

It would be a real coup for F1 to ‘activate’ a Chinese OEM, but here F1’s foray to Korea in 2010-13 provides a lesson. At the time Hyundai/KIA ranked amongst the auto industry’s fastest-growing mainstream brands, so it seemed sensible to woo them to F1 via a grand prix, particularly one situated within an hour’s drive of Gwangju, home to one of Hyundai/KIA’s largest assembly plants.

Yet, almost a decade on, the company, now the world’s fifth-largest car conglomerate, is no closer to entering F1 than it was back in Ecclestone’s heyday. Indeed, with the company’s subsequent shift to electrification and alternate fuel cells, a case could be made the chances are diminishing by the year.

Furthermore, China’s fastest-growing auto segments are SUVs and ‘New Energy Vehicles’, i.e. full electric and plug-in hybrids. At this week’s Shanghai Motor Show executives predicted the NEV segment, currently representing less than one per cent of sales, will grow to 25 per cent by 2025. Municipalities offer massive subsidies on NEVs and provide free parking.

Introducing Sunday’s race on Sky, Simon Lazenby opined that he had “Never seen so many CEOs from car companies at one race.” On the surface that is gratifying, but how many CEOs had made the journey to attend the 1,000th grand prix, and how many happened to be in Shanghai for the motor show and made a diversion?

Does China warrant a slot on the F1 calendar? Absolutely, as much as – but no more than – any of the other 20 hosts.

China has had 16 shots at establishing itself as grand prix host and remains wanting, particularly with regard to its tortuous visa regimes and archaic communication regulations, neither of which are up to 21st century global standards. Such issues need to be sorted before China is granted a second race. For too long now we have heard little more than excuses followed by: “Yes, yes, yes, next year…

Having counted up to the 1,000th race since last year, the event proved a damp squib. The obviously limited appetite for F1 in the area, 15 years since holding its first race, contributed as much to the let-down as did a lack of imagination on the part of Liberty and the teams. It seemed everyone went through a ‘1000’ motions, but did little more to ensure fitting celebrations.

For its 1000th event the WDC and F1 deserved better than a quick paint job on the paddock surface and a celebratory coin. If the ‘1000th F1 race’ meant so little to Liberty and China, adding another is unlikely to make a difference.

The sport should consider that before rushing to add a second Chinese Grand Prix. If there is a lesson to be learned from last weekend it is that Liberty needs to grow the sport of F1 in China organically, rather than through sheer weight of races.